A surgery used to remove part of one ovary or part of both ovaries.

Partial ovariectomy (also ovariotomy or oophorectomy) is a surgery used to remove part of one ovary or part of both ovaries (Pic. 1).

Partial ovariotomy is a term sometimes used to describe a variety of surgeries such as ovarian cyst removal, or resection of parts of the ovaries. This kind of surgery is fertility-preserving, although ovarian failure (loss of function of the ovaries) may be relatively frequent. Most of the long-term risks and consequences of oophorectomy are not or only partially present with partial oophorectomy.

Risks of an oophorectomy include the following:

An ovarian cyst is a fluid-filled lesion in the ovary (Pic. 2). Ovarian cysts occur in 30% of females with regular menses, 50% of females with irregular menses and 6% of postmenopausal females. The most common ovarian cysts are follicular cysts. Follicular cysts result from stimulation from tropic hormones. It is not known whether these cysts develop from a failed dominant follicle or an immature follicle. Corpus luteum (temporary hormone-secreting structure in ovaries involved in ovulation and early pregnancy) cysts arise from Graafian follicles (mature liquid-filled cavity in a mammalian ovary that ruptures during ovulation to release an egg) shortly after ovulation. These cysts have increased vascular supply to them and the cysts can fill with blood posing a risk of rupture. Ovarian cysts can result in abnormal ovulation, and thus accounts for 25 percent of female infertility cases.

Endometriosis is referred to condition where inner lining of the uterus is found in other parts of the body (Pic. 3). Infertility and pelvic pain in its various forms are the main expressions of endometriosis. The fallopian tubes and ovaries may adhere to the lining of the pelvis or to each other, restricting their movement.

Another factor which causes infertility with endometriosis, may be the over-production of prostaglandins. The prostaglandins are a group of lipids made at sites of tissue damage or infection that are involved in dealing with injury and illness. They control processes such as inflammation, blood flow, formation of blood clots and the induction of labour. The uterine lining (the endometrium) normally produces prostaglandins, and women with endometriosis have excess endometrium growing (endometrial hyperplasia). Depending on the severity of the overgrowth, overgrown endometrium can make it difficult for a fertilized egg to implant and begin developing into a fetus. Menstrual irregularities such as failure to ovulate can also make it more difficult to conceive.

Ovarian hyperstimulation syndrome (OHSS) is a complication (Pic. 4) that arises during the processes of controlled ovarian stimulation (COS) in infertility treatment. As the most severe complication of COS, OHSS is associated with various signs and symptoms, including shortness of breath, abdominal distension, pleural effusion, ascites, and oedema of the extremities. The pathogenesis of OHSS has not been explained clearly until now.

Oophorectomy is an intraabdominal surgery and serious complications stemming directly from the surgery are rare. An infrequent complication is injuring of the ureter at the level of the suspensory ligament of the ovary.

The partial ovariectomy could not be preventing if the indications for the surgery are present.

Partial ovariectomy is used in cases where fertility preservation is expected, because ovaries are not removed completely as with total ovariectomy. Thus, permanent infertility is not common; however some women who undertake a partial oophorectomy suffer from ovarian failure. The loss of fertility can be due to an accelerated loss of follicles, an inability of the remaining follicles to respond to ovulatory signals, an initially reduced ovarian reserve at the time of birth, or a combination of all.

Prognosis after oophorectomy depends on the reason, why the surgery has to be performed. If it is because of removal of cyst or endometriosis there is bigger chance, that there still is some healthy ovary tissue left and fertility would be preserved. 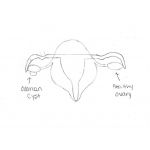 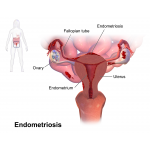 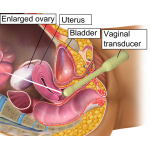