Perimenopause is the period (2-8 years) preceding menopause and the one-year period after final menses, resulting from the loss of ovarian follicular activity. The initiation of perimenopause is characterized by intense biological variability secondary to endocrinological (Pic. 1) and clinical changes. Thus, the perimenopause or so-called "menopausal transition" represents the passage from reproductive to non-reproductive life.

During perimenopause, estrogen levels average about 20–30% higher than during premenopause, often with wide fluctuations. These fluctuations cause many of the physical changes during perimenopause as well as menopause. Some of these changes are hot flashes, night sweats, difficulty sleeping, vaginal dryness or atrophy, incontinence, osteoporosis, and heart disease.

Follicular development at this time has been demonstrated to be erratic, with consequent variability in estrogen levels and an increased percentage of anovulatory cycles. Thus, the pituitary gland is stimulated to produce more follicle-stimulating hormone (FSH) in an effort to stimulate the resistant follicles. The production of FSH and luteinizing hormone (LH) by the pituitary gland are subject to a predominantly negative feedback by the ovarian sex steroids (estrogen and progesterone). During the menopausal transition, there may be a fluctuation of circulating levels of sex steroids, particularly a reduction of estrogens and inhibin ¾ the latter produced in the granular cells of the ovary. This fluctuation may disturb the negative feedback of the pituitary FSH secretion, while LH production may remain in the normal range. However, serum levels of FSH and estrogens (estradiol, estrone) can widely fluctuate from cycle to cycle and from woman to woman during the perimenopause.

In some women, menopause may bring about a sense of loss related to the end of fertility. During this period, fertility diminishes but is not considered to reach zero until the official date of menopause. The official date is determined retroactively, once 12 months have passed after the last appearance of menstrual blood.

It is possible that the timing of menopause may be influenced by different factors such as cigarette smoking, living at high altitudes and history of depression. The majority of perimenopausal women experience irregular menstrual periods, when shortened cycles or longer periods of amenorrhea may reflect the large fluctuation of the ovarian estrogen secretion observed during this time.

Consequently, confirmation of the perimenopause is usually based on laboratory tests and a woman's medical history, as well as on the characteristics of somatic and emotional symptoms she reports.

Perimenopause is a natural stage of life. It is not a disease or a disorder. Therefore, it does not automatically require any kind of medical treatment. However, in those cases where the physical, mental, and emotional effects of perimenopause are strong enough that they significantly disrupt the life of the woman experiencing them, palliative medical therapy may sometimes be appropriate.

Some research appears to show that melatonin supplementation in perimenopausal women can improve thyroid function and gonadotropin levels, as well as restoring fertility and menstruation and preventing depression associated with menopause.

The perimenopause usually begins at a mean age of 45.5-47.5 years and has an average duration of 4 years until menopause occurs (mean age of 51.3 years).

Generally, the first apparent hormonal change of the perimenopause is a rising concentration of the pituitary gonadotrophin FSH. The rising FSH concentration is probably caused by an exponential decline of gonadotrophin-sensitive ovarian follicles as menopause approaches.

During the transition to menopause, menstrual patterns can show shorter cycling (by 2–7 days); longer cycles remain possible. There may be irregular bleeding (lighter, heavier, spotting). Dysfunctional uterine bleeding is often experienced by women approaching menopause due to the hormonal changes that accompany the menopause transition. Spotting or bleeding may simply be related to vaginal atrophy, a benign sore (polyp or lesion), or may be a functional endometrial response.

In addition to changes in the hormonal profile, the perimenopause is typically marked by the presence of vasomotor symptoms such as hot flushes and night sweats (hot flushes that occur with perspiration during sleep). These symptoms are experienced by 45-85% of women. Hot flushes are similar to a heat dissipation response, and their complete physiological mechanisms remain undetermined. One hypothesis regarding the mechanism of hot flushes suggests that the changes observed in the thermoregulatory system in the hypothalamus, possibly modulated by fluctuations in levels of sex steroids and the opioid peptides, play an important role. Thus, hot flushes would be more likely to occur in response to hormonal fluctuations rather than simply to the decline of levels of estrogen. Nonetheless, some clinical studies suggest that estrogen administration decreases the occurrence of hot flushes in a dose-dependent fashion. In addition, a community-based longitudinal study investigating 453 pre-, peri- and postmenopausal women (aged 48-59 years), has also demonstrated that the frequency of hot flushes correlates with serum levels of FSH and estradiol in perimenopausal women.

Menopause, also known as the climacteric, is the time in most women's lives when menstrual periods stop permanently, and they are no longer able to bear children. Menopause typically occurs between 49 and 52 years of age.

The mechanism by which the perimenopause is associated with an increased risk for depressive symptoms in middle-aged women is still controversial. Most studies examining this question vary greatly in design. For example, data are derived from different settings (gynecological clinics versus community-based studies), and have included women with diverse menopausal status, ascribed primarily to age. These studies also suffered from a lack of standardized instruments for evaluating psychiatric symptoms. It is therefore more informative to review them separately.

Physiological changes and some physical manifestations associated with the transition to menopause include urogenital atrophy causing dyspareunia, dysfunctional uterine bleeding, and a higher risk for osteoporosis and cardiovascular disease. These changes may account for the high frequency with which perimenopausal women seek medical consultation as compared to pre- or postmenopausal women.

In addition, perimenopausal change often occurs when other stressors may be present in a woman's life:

Although perimenopause itself could not be prevented, women may reduce the associated symptoms. Regular exercising (at least 30 min per day), quit smoking, and keep BMI (body mass index) in normal should help.

As they age, women see a drop in fertility as their ovaries release fewer eggs each year. Around the age of 40 to 50, when the ovaries are out of eggs to release, women begin to notice the symptoms of menopause (Pic. 2). Today delaying pregnancies to build careers has become common, making it difficult for some women to get pregnant when they are ready to have children. While therapies like egg freezing do exist, the risks and costs associated with these procedures might have women and their families looking at alternative solutions.

A woman can still become pregnant when perimenopausal because regular ovulation may continue.

Women will often, but not always, start these transitions (perimenopause and menopause) about the same time as their mother did. After one year of amenorrhea (postmenopause), women experience a well-defined profile of hormones, with low estrogen and progesterone, and high gonadotrophin levels. 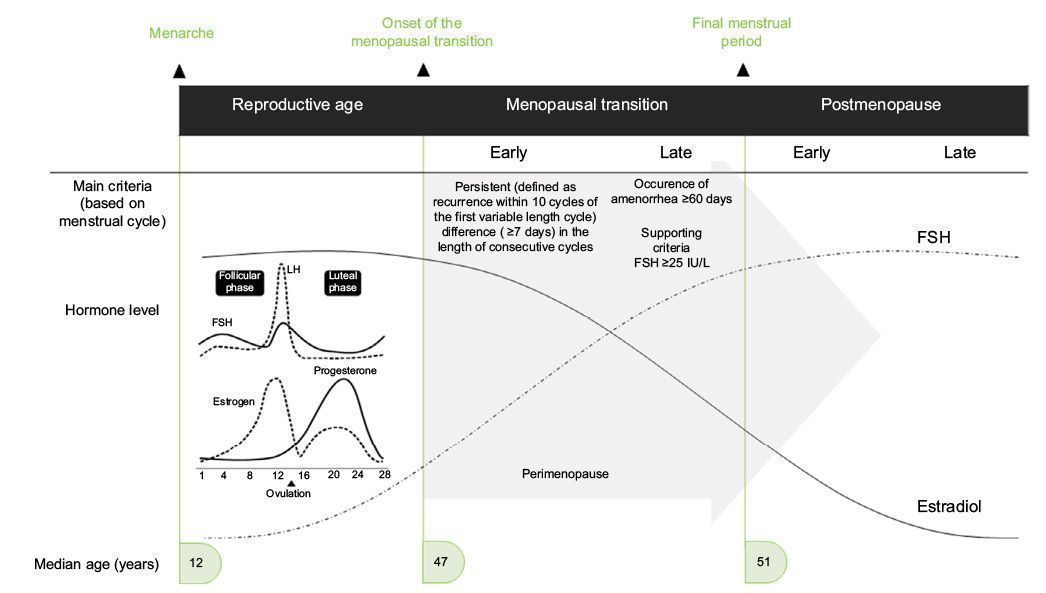 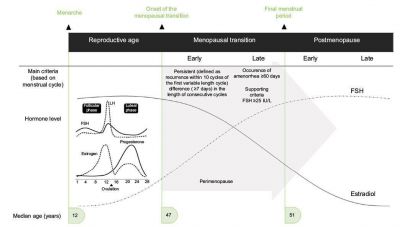 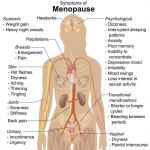