A damage to body caused by a large dose of radiation.

Exposure to various kinds and amounts of radiation can have lasting effects in humans. Radiation that is in the form of x-rays and gamma rays can be devastating to the sensitive cells of the human body, including germ and Leydig cells. The damage done depends on the age of the patient and dose, and ultimately can result in permanent sterility. Radiation exposition is caused by exposure to a large dose of ionizing radiation over a short period of time or long-term exposure to radon.

A causes of radiation sickness:

There is no specific treatment once radiation exposure has occurred. There are ways to help manage the symptoms while the body recovers from the damage already done. This can generally be helpful and supportive during the healing process.

The “prodromal syndrome” is not a diagnosis, but the technical term used by mental health professionals to describe a specific group of symptoms that may precede the onset of a mental illness. For example, a fever is “prodromal” to measles, which means that a fever may be a risk factor for developing this illness.

Bone marrow death is caused by a dose of radiation between 2 and 10 Gray and is characterized by the part of the bone marrow that makes the blood being broken down. Therefore production of red and white blood cells and platelets is stopped due to loss of the blood-making stem cells (4.5 Gray kills 95% of stem cells). The loss of platelets greatly increases the chance of fatal hemorrhage, while the lack of white blood cells causes infections; the fall in red blood cells is minimal, and only causes mild anemia.

Gastrointestinal death is caused by a dose of radiation between 10 and 50 Gray. Whole body doses cause damage to epithelial cells lining the gastrointestinal tract and this combined with the bone marrow damage is fatal. All symptoms become increasingly severe, causing exhaustion and emaciation in a few days and death within 7–14 days from loss of water and electrolytes.

Except for the bone marrow, the most sensitive organs to radiation therapy in the body are the gonads, both the male testis and the female ovary. The extent of damage in the female and male gonads depends on the dose, fractionation schedule and irradiation field. Radiation therapy can be administered as teletherapy, which aims at treating a large volume of tissue. For small volumes of tissue, such as in the case of cervix cancer in the female, radiation therapy can be administered in encapsulated sources of radiation that can be implanted directly into or adjacent to tumor tissue. Whenever female reproductive organs are involved in the irradiated field, i.e., the ovaries, the uterus and the vagina may be compromised and damaged by direct irradiation. Scattered radiation may also damage reproductive organs.

In the female, radiation therapy results in dose-related damage of the gonads by the destruction of primordial follicles, which constitute the nonrenewable follicle pool. In women, the degree and persistence of the damage is also influenced by age at the time of exposure to radiotherapy and due to a reduced reserve of primordial follicles in older women, the number of follicles remaining may be also be reduced at older ages. Table 1 presents a compilation of current knowledge on the impact of radiation doses and age at radiotherapy in male and female gonadal function. In general, a dose of about 2 Gy (Gray - a derived unit of ionizing radiation) applied to the gonadal area destroys up to 50 % of the ovarian follicle reserve. In pediatric patients, failure in pubertal development may be the first sign of gonadal failure in both sexes. Total body irradiation (TBI) given in conjunction with myeloablative conditioning prior to bone marrow transplantation is one of the most toxic treatments for the gonads and it is highly related to gonadal failure in both sexes.

In men, the gonadal stem cells responsible for the continual differentiation and production of mature spermatozoa, the spermatogoniae, are extremely sensitive to radiation. The Leydig cells, which are responsible for the hormonal production of testosterone, are on the contrary more resistant to radiotherapy and adult patients may thus preserve hormonal production although becoming infertile. In prepubertal boys, the sensitivity to radiation therapy of Leydig cells is greater than that of older males at very high doses. Prepubertal patients may retain Leydig cell function after radiation therapy during childhood and in those cases they will present with normal pubertal development and well-preserved sexual function later in life. Nevertheless, most of those patients present at adulthood with reduced testicular size, impaired spermatogenesis and infertility.

The radiation dose to the ovaries that generally causes permanent female infertility is 20.3 Gy (Gray - a derived unit of ionizing radiation) at birth, 18.4 Gy at 10 years, 16.5 Gy at 20 years and 14.3 Gy at 30 years. After total body irradiation, recovery of gonadal function occurs in 10−14% of cases, and the number of pregnancies observed after hematopoietic stem cell transplantation involving such as procedure is lower than 2%.

Young patients who undergo chemoradiation might be interested in fertility preservation by the use of ovarian transposition, cryo-conservation of oocytes, ovarian tissue and freezing sperm through cryopreservation.

High doses of radiation during pregnancy induce anomalies, impaired growth and intellectual disability, and there may be an increased risk of childhood leukemia and other tumours in the offspring. 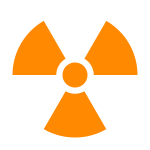 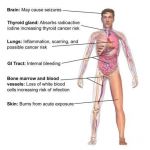 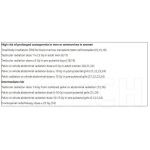