Radiatiotherapy or radiation therapy is therapy using ionizing radiation, generally as part of cancer treatment to control or kill malignant cells, in which the radiation is usually produced by a device called linear accelerator (Pic. 1). Radiation therapy may be curative in a number of types of cancer if they are localized to one area of the body. It may also be used as part of adjuvant therapy, to prevent the tumor from recurring after the majority of the tumorous mass has been surgically removed. Another option is using radiotherapy as palliative, to relieve the patient of as many symptoms of the disease as possible in a stage when the tumor is no longer treatable. Radiation therapy, however, is associated with several adverse effects, especially destruction of germ cells (sperm cells and oocytes) when gonads are exposed to the radiation.

Radiation therapy is commonly applied to the cancerous tumor because of its ability to supress cell growth. Ionizing radiation works by damaging the DNA of cancerous tissue leading to cellular death. This DNA damage is caused by one of two types of energy, photon or charged particle. This damage is either direct or indirect ionization of the atoms which make up the DNA chain. Ionization results in significant damage sustained by the DNA molecule and leads to cell death.

Before treatment, a CT (computered tomography) scan is often performed to identify the tumor and surrounding normal structures. The patient receives small skin marks to guide the placement of treatment fields. Patient positioning is crucial at this stage as the patient will have to be set-up in the identical position during treatment. Many patient positioning devices have been developed for this purpose, including masks and cushions which can be molded to the patient.

Most of times, conventional treatments with radiotherapy are delivered in five weekly fractions throughout an uninterrupted variable period of two-eight weeks, depending on the disease to be treated. Fractioning of the radiation dose is performed to reduce the acute, radiation-caused side effects. However, alterations in the therapeutic scheme may occur.

Patients undergoing radiotherapy usually experience symptoms determined by some of radiotherapy’s acute side effects. These may include:

Nausea and vomiting occur only in certain radiotherapy cases, when the stomach or abdomen is targeted. Some patients may vomit immediately after the radiotherapy, which may be more of a psychological effect of the distress caused by the treatment.

Epithelial surfaces, such as skin and mucous membranes, may sustain damage from radiation therapy. Depending on the area being treated, this may include the skin, oral mucosa, pharyngeal, bowel mucosa and ureter. The rates of onset of damage and recovery from it depend upon the turnover rate of epithelial cells. Typically the skin starts to become pink and sore several weeks into treatment. The reaction may become more severe during the treatment and for up to about one week following the end of radiation therapy, and the skin may break down. Although this moist desquamation is uncomfortable, recovery is usually quick. Skin reactions tend to be worse in areas where there are natural folds in the skin, such as underneath the female breast, behind the ear, and in the groin.

Depending on the region treated, various regions of the digestive tract may become sore and may develop ulceration in their inner lining. Ulcers in the mouth may develop following radiotherapy in the head and neck region. In severe cases, this can affect swallowing. The lining of oesophagus, stomach and bowel may also develop ulcerations due to collateral radiation exposure during radiotherapy of adjacent organs, such as the lungs or liver.

Apart from acute adverse effects of radiation, radiotherapy carries the risk of long-term complications, including:

Radiotherapy is most comonly used to treat various types of malignant cancers (as mentioned above). Varying response of the specific tumour type to radiotherapy (radiosensitivity) determines whether radiotherapy will be utilized in the treatment of the cancer.

The adverse effects of radiotherapy on healthy tissues surrounding may be prevented, or at least reduced, by a number of methods, including:

The total radiation dose is fractionated (spread out over time) for several important reasons. Fractionation allows normal cells time to recover, while tumor cells are generally less efficient in repair between fractions. This helps to mitigate the acute adverse effects of radiotherapy that arise from radiation exposure of healthy tissues. Fractionation also allows tumor cells that were in a relatively radio-resistant phase of the cell cycle during one treatment to cycle into a sensitive phase of the cycle before the next fraction is given. Similarly, tumor cells that were chronically or acutely hypoxic (deprived of oxygen, and therefore more radioresistant) may reoxygenate (replenish their oxygen resources) between fractions, improving the tumor cell kill.

The planning of radiation therapy treatment has been revolutionized by the ability to delineate tumors and adjacent normal structures in three dimensions using specialized CT and/or MRI scanners and planning software. Planning techniques, such as virtual simulation, or the enhanced form, 3-dimensional conformal radiation therapy (3DCRT), allow to shape the radiation beams accurately to conform to the tumour shape and subsequently cause less collateral damage to healthy tissues.

Fertility impairment is one the most significant adverse effects in patients treated with radiation to the head and neck area, pelvic region and spine. Radiotherapy of head and neck may damage the central nervous system, leading to deficiency of gonadotropins, possibly hyperprolactinemia (high levels of prolactin, inhibiting the secretion of sex hormones) and disruption of gonadal function. Radiotherapy in the pelvic area directly damages the gonads and impairs their function. Gonads and germ cells are among the most radiosensitive tissues and even low doses of radiation may lead to their dysfunction and cell death.

Oocytes (egg cells) are extremely radiosensitive. Therefore, radiation easily damages the DNA of oocytes leading to their atrophy (cell death) and diminished ovarian reserve. There are several factors affecting ovarian fertility impairment: radiation dose, age at time of the exposure and size of the irradiated area. Moreover, women treated with radiation to the pelvic region or abdomen are in a greater risk of adverse pregnancy outcomes and complications, such as placental disorders, spontaneous abortions, low birth weight and difficulty with conceiving, due to radiation-induced damage to the uterus.

The testicle is one of the most radiosensitive tissues, and even the lowest doses of radiation may lead to its temporary dysfunction and oligospermia (reduced sperm count). Also, the dividing cells in the testes, the spermatogonia, are very radiosensitive. Therefore, even a dose below 1 Gy (Gray) may lead to a significant reduction in the number of spermatogonia and daughter cells. Due to the lifespan of developing sperm cells, during the first 50-60 days the sperm count is reduced to 50% (at a 1.5–2 Gy dose), and may later drop even further, eventually leading even to azoospermia (no sperm cells present in the semen). Higher radiation doses may lead to permanent or long-term azoospermia and infertility. Potential restoration of fertility requires some of the dividing cells to survive, and the time required before the sperm count is restored heavily depends on both the single dose and the total dose of radiation.

Currently, radiotherapy is considered as the most effective curative treatment after surgery for cancer. About one third of the population will develop the disease, and will require this therapeutic modality, and 60% of the patients will be submitted to radiotherapy for curative purposes, often combined with surgery and chemotherapy.

The effect of radiotherapy on control of cancer has been shown to be limited to the first five years after surgery, particularly for breast cancer. The difference between breast cancer recurrence in patients who receive radiotherapy vs. those who don't is seen mostly in the first 2–3 years and no difference is seen after 5 years.

The gonads (ovaries and testicles) are very sensitive to radiation. They may be unable to produce gametes following direct exposure to most normal treatment doses of radiation. Treatment planning for all body sites is designed to minimize, if not completely exclude dose to the gonads if they are not the primary area of treatment. 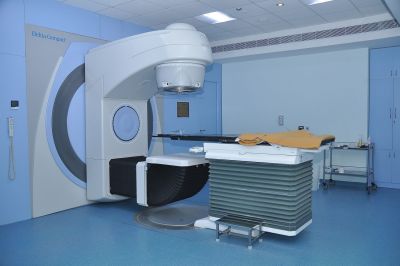 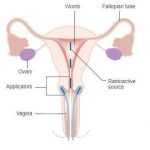 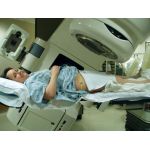