Testicular adrenal rest tumor (TART) is a very rare tumor of the testes, which is associated with increased levels of adrenocorticotropic hormone (ACTH). This hormone is released by from the pituitary gland and stimulates the cells of adrenal glands (Pic. 1) into production of their own hormones, mainly cortisol and aldosterone.

The most important condition in which the levels of ACTH are elevated is called Congenital adrenal hyperplasia (CAH). Congenital adrenal hyperplasia is an inherited disorder affecting the steroid synthesis (Pic. 2) of the adrenal gland. In more than 90% of the cases, CAH is caused by CYP21 (21-hydroxylase) deficiency. CYP21 deficiency results in an impaired production of cortisol and mostly of aldosterone. Consequently, pituitary ACTH production is increased, leading to hyperplasia (increased size) of the adrenal glands. The impaired production of cortisol and aldosterone may lead to an Addisonian crisis with salt wasting and dehydration in early life.

Nowadays, the diagnosis of the most severe types of CAH can be made at an early age by neonatal screening programs or by prenatal diagnosis in the case of an affected proband (patient), thereby preventing life threatening events. However, in adult CAH patients several complications can develop and in recent years it became clear that some of them might be detected already in childhood. One of the most important and frequently detected complications in male CAH patients is the development of testicular tumours.

TART are benign tumours and in most patients the tumours are present bilaterally. The typical location is within the rete testis (a network of tubules allowing the passage of sperm out of the testis). Histologically, TART resemble adrenocortical tissue. it is hypothesized that TART arise from aberrant (misplaced) adrenal cells descended in the embryological period together with the testes. Interestingly, intensifying of glucocorticoid treatment with suppression of ACTH secretion is not always successful in reducing tumour size and even in well-controlled CAH patients, with normal or suppressed plasma ACTH levels, testicular adrenal rest tumours are found. The presence of these aberrant adrenal cells within the testis is the most probable prerequisite for the development of TART explaining the often observed discrepancy between the development of TART and hormonal control.

TART have no malignant features and, therefore, there seems to be no need to remove them at an early stage. However, because of the central localization of the tumours near the mediastinum testis, compression of the seminiferous tubules finally may lead to obstructive azoospermia (no sperm present in the ejaculate, due to obstruction of a part of the genital tract) and irreversible damage of the surrounding testicular tissue. TART may shown no clinical signs apart from a palpable testicular mass. Because the location of the tumours within the rete testis TART are difficult to palpate, usually only tumours with a size of more than 2 cm are detectable by palpation. Ultrasound and MRI are equally good methods for detection and monitoring of the tumours, but ultrasound is preferable because it is quick and cheap, and even very small adrenal rests of only a few millimetres in diameter are detectable.

Until now, intensifying glucocorticoid (hormones physiologically produced by the adrenal glands) treatment is the choice of treatment in patients with TART. Intensifying glucocorticoid therapy may lead to reduction of the tumour size by suppression of ACTH secretion thereby improving testicular function in more advanced stages of the tumor. However, it may be that this treatment leads only to temporary improvement of the obstruction because tumour growth may start again after lowering the glucocorticoid dose. In stage 4, increasing the dose of glucocorticoids is probably no longer effective in decreasing tumour size, but removal of the tumour may prevent further testicular damage. Because of the benign character of the tumours, testis-sparing surgery has been proposed for the treatment of TART.

Patients with TART may exhibit no symptoms at all, expecially in the early stages of the tumor. Larger tumors may present as a palpable testicular mass. In blood workup, ACTH levels may be elevated, but may also be normal in patients already undergoing corticoid treatment.

Congenital adrenal hyperplasia, if left untreated, is the condition most frequently associated with TART, as described above.

Because adrenal rest cells are already present in the embryological period, it is clear that prevention of TART is not possible.

TART is the most important cause of infertility in adult male CAH patients. They are not malignant but longstanding TART can result in irreversible damage of testicular tissue and subsequently infertility. Because of the central localization of the tumours near the mediastinum testis, compression of the seminiferous tubules finally may lead to obstructive azoospermia and irreversible damage of the surrounding testicular tissue. In addition to the mechanical effects, the tumours may also have a paracrine (local hormone-mediated) effect on the surrounding tissue. Steroids produced by the tumour cells may be toxic to the Leydig cells and/or germ cells. The irreversible end stage of longstanding TART is tubular hyalinization (scarring and obliteration of the testicular tubules) with obstruction of the lumen and complete loss of germ cells and Sertoli cells (cells in the testes supporting the development of sperm). The end stage of TART thus combines characteristics of both obstructive and non-obstructive azoospermia.

As long as medical and surgical treatments of TART are far from perfect, patients should be informed about the negative effects of TART on fertility and cryopreservation of semen should be offered as soon as possible. 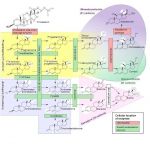