About Atrophy of the testicles

Testicular atrophy is a medical condition in which the testes diminish in size and may be accompanied by loss of spermatogenic function. This does not refer to temporary changes, such as those brought on by cold.

Atrophic testes may be:

Testicular atrophy is one of the symptoms of some sexually transmitted diseases, for instance HIV, gonorrhea and syphilis, or other infections, such as mumps. Other cause may be age or alcoholism. Natural aging is associated with gradual testicular shrinkage after childbearing age as a natural part of body aging. Chronic alcoholism may cause hepatic cirrhosis which affects testicular production of testosterone. These mechanisms lead to subsequent decrease in semen volume and sperm density.

Non-obstructive azoospermia is defined as complete absence of sperm in the ejaculate due to testicular failure. The finding of atrophic testes and elevated FSH levels indicates germ cell failure. Patients with normal sperm production typically have FSH values in the lower end of the normal range, and levels above this should raise suspicion of a defect in spermatogenesis.

Testicular cancer is cancer that develops in the testicles, a part of the male reproductive system. Testicular atrophy following torsion of the spermatic cord has been reported to increase the risk of testicular cancer.

A varicocele is an abnormally dilated venous network that drains blood from the testicles. Varicocele is a major cause of male infertility, as it may impair spermatogenesis through several distinct physiopathological mechanisms. The most common complication of untreated varicocele is higher temperature of the testes, resulting in testicular atrophy causing infertility.

Orchitis is inflammation of the testes. It can also involve swelling, heavy pains and frequent infection. Orchitis can be related to epididymitis infection that has spread to the testicles (then called "epididymo-orchitis"), sometimes caused by the sexually transmitted diseases chlamydia and gonorrhea. It has also been reported in cases of males infected with brucellosis (a zoonosis caused by ingestion of unpasteurized milk or undercooked meat from infected animals). Orchitis can also be seen during active mumps, particularly in adolescent boys.

Ischemic orchitis may result from damage to the blood vessels of the spermatic cord during inguinal herniorrhaphy, and may in the worst event lead to testicular atrophy.

Testicular torsion occurs when the spermatic cord (from which the testicle is suspended) twists, cutting off the testicle's blood supply, a condition called ischemia. The principal symptom is rapid onset of testicular pain. Testicular atrophy is a significant complication after untreated or delayed testicular torsion. Testicular trauma or a history of torsion should be noted, since both may result in atrophic testes.

A hydrocele testis is an accumulation of clear fluid in the tunica vaginalis, the most internal of membranes containing a testicle. The long continued presence of large hydroceles causes atrophy of testis due to compression or by obstructing blood supply. 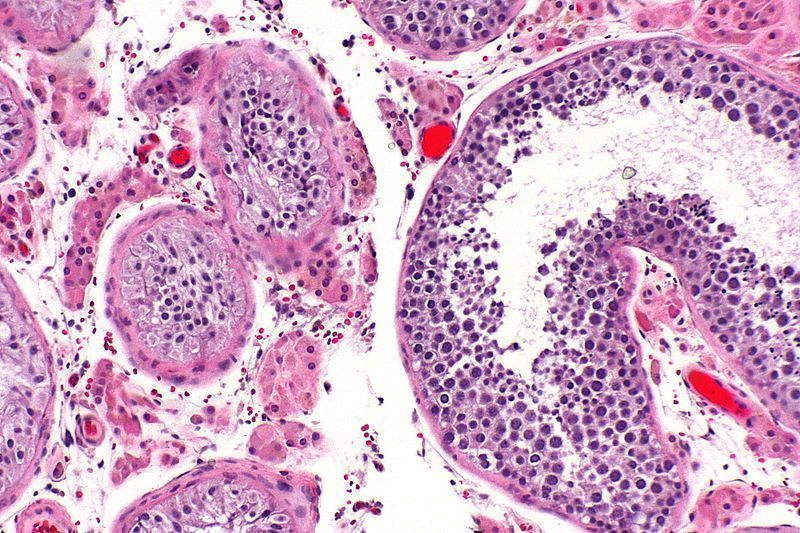 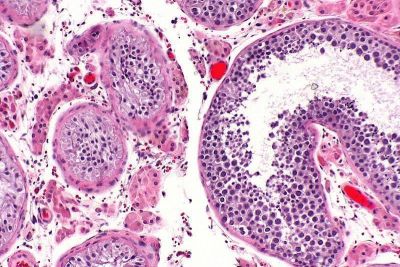