Pelvic pain is a common condition which significantly deteriorates health-related quality of life. The most commonly identified causes of pain in the pelvic region are gynaecologic (Pic. 1), urologic, gastrointestinal, neurological, and musculoskeletal (Pic. 2). However, in up to 33% of patients the source of this symptom is not identified, frustrating both patients and health-care professionals. Pelvic pain may involve both the somatic and visceral systems, making the differential diagnosing challenging.

Chronic pelvic pain (CPP) is characterized by lower abdominal or pelvic pain that is of at least six months duration, which maybe continuous or intermittent. Patients with CPP often have other comorbidities such as anxiety, depression, dyspareunia, and sleep disturbances. Overall, the CPP population demonstrates significant impairment in quality of life (QOL) and the ability to function on a daily basis.

In woman chronic pelvic pain is surprisingly common with approximately 38 per 1000 women attending primary care services each year with CPP, a rate comparable to that of asthma and back pain. Chronic pelvic pain is a common condition amongst women of reproductive age, but the underlying patho-physiology remains poorly understood. Many factors have been implicated as causal, including endometriosis, pelvic inflammatory disease and adhesions.

Laparoscopy (a surgical technique which allows the pelvic organs to be visualized) is used by gynaecologists to facilitate diagnosis. However, laparoscopy fails to identify underlying pathology in up to 35% (range 3-92%) of women. Past research has tended to focus on differentiating 'organic' from 'non-organic' pain using psychological characteristics (e.g. anxiety and depression) and this has led to the emergence of a negative psychological profile for women with CPP. This negative profile is more commonly associated with women for whom no underlying pathology can be found to account for the pain. Thus, they suffer the same stigmatizing characteristics ascribed to other chronic illnesses, such as chronic fatigue syndrome and fibromyalgia, which are difficult to diagnose and have similar uncertain illness trajectories.

In men chronic pelvic pain syndrome is a frequent outpatient urological diagnosis. The incidence is increasing, being reported to be around 15% . Symptoms of CPPS are urinary and erectile dysfunctions and pain in the prostate, perineal, inguinal, scrotal, and suprapubic regions, lasting for at least 3 of the previous 6 months. The quality of life is also disturbed as the result of urinary and erectile dysfunctions.

Men can suffer from chronic pelvic pain in case of prostatitis.

Blocked fallopian tubes are unable to let the ovum and the sperm converge. The Fallopian tubes may be occluded or disabled by endometritis, infections after childbirth and intraabdominal infections including appendicitis and peritonitis. Infections can lead to chronic pelvic pain.

Pelvic inflammatory disease (PID) in women is an infectious and inflammatory disorder of the uterus, fallopian tubes and adjacent pelvic structures as a result of ascending infection from the endocervix. The highest prevalence is in 16- to 24-year-olds, reflecting the high rate of bacterial sexually transmitted infections found in this age group. Complications include infertility, ectopic pregnancy and chronic pelvic pain, and can result in considerable physical and emotional morbidity.

Ovarian cancer is accepted as a “silent killer” probably because it is believed that majority of patients are diagnosed in late stage, and that in early stage disease no symptoms are evident. However, over the last decade there has been a lot of research in the symptom-based detection of ovarian cancer. It has been shown that the patients with ovarian cancer may have symptoms for at least several months before their diagnosis The highest scored symptoms are abdominal swelling, abdominal bloating, and pelvic pain.

Uterine fibroids are benign smooth muscle tumors of the uterus. Fibroids, particularly when small, may be entirely asymptomatic. Symptoms depend on the location and size of the fibroid. Important symptoms include abnormal uterine bleeding, heavy or painful periods, abdominal discomfort or bloating, pelvic pain, painful defecation, back ache, urinary frequency or retention, and in some cases, infertility.

Vaginismus is often described as a muscular spasm of the outer third of the vagina, causing sex to be painful or impossible. Patient complains of recurrent or persistent genital pain before, during, or after sexual intercourse that is not caused exclusively by lack of lubrication or by vaginal spasm.

A unicornuate uterus represents a uterine malformation where the uterus is formed from one only of the paired Müllerian ducts (are paired ducts of the embryo that run down the lateral sides of the urogenital ridge and terminate at the sinus tubercle in the primitive urogenital sinus, in the female, they will develop to form the uterine tubes, uterus,cervix, and the upper one-third of the vagina; in the male, they are lost) while the other Müllerian duct does not develop or only in a rudimentary fashion. The sometimes called hemi-uterus has a single horn linked to the ipsilateral fallopian tube that faces its ovary.

Patients who have a unicornuate uterus with rudimentary horn have an increased incidence of gynecologic problems and tend to present, at menarche or later in their life, symptoms such as dysmenorrhea and chronic pelvic pain.

Amenorrhoea is the absence of a menstrual period in a woman of reproductive age. Amenorrhoea may cause serious pain in the back near the pelvis and spine. This pain has no cure, but can be relieved by a short course of progesterone to trigger menstrual bleeding.

Cervical stenosis means that the opening in the cervix (the endocervical canal) is more narrow than is typical. Symptoms depend on whether the cervical canal is partially or completely obstructed and on the patient's menopausal status. Pre-menopausal patients may have a build up of blood inside the uterus which may cause infection, sporadic bleeding, or pelvic pain.

Chronic nonbacterial prostatitis or chronic prostatitis/chronic pelvic pain syndrome (CP/CPPS) is a pelvic pain condition in men. This condition was formerly known as prostatodynia (painful prostate). Chronic prostatitis/chronic pelvic pain syndrome (CP/CPPS) is characterized by pelvic or perineal pain without evidence of urinary tract infection, lasting longer than 3 months, as the key symptom. Symptoms may wax and wane. Pain can range from mild to debilitating. Pain may radiate to the back and rectum, making sitting uncomfortable. Pain can be present in the perineum, testicles, tip of penis, pubic or bladder area. Dysuria, arthralgia, myalgia, unexplained fatigue, abdominal pain, constant burning pain in the penis, and frequency may all be present. 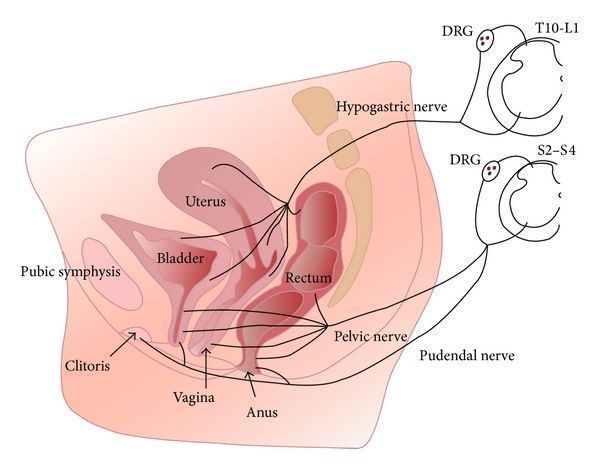 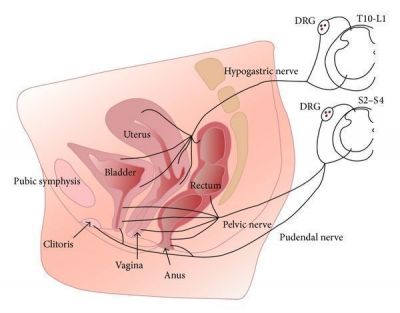 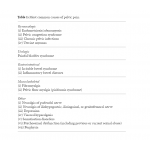