Retained menstrual flow due to congenital obstruction of the vagina.

Cryptomenorrhea, also called hematocolpos, is a condition where the menstrual flow is retained by congenital obstruction of the vagina (Pic. 1). Menstruation occurs, but is not visible. Specifically the endometrium (the inner lining of uterine cavity) is shed, but a congenital obstruction such as a vaginal septum or on part of the hymen retains the menstrual flow. A patient with cryptomenorrhea will appear to have amenorrhea (absence of menstrual cycle) but will experience cyclic menstrual pain. Menstrual blood and tissue residues collect in the vagina, which gives rise to symptoms. On abdominal examination, a swelling is felt. A tense, bulging, bluish membrane is seen on vulval inspection, and a tense bulging mass can be felt on rectal examination. Menstrual blood can also fill the uterine cavity, leading to the condition called hematometra (Pic. 1). Possible retrograde (backward) flow of endometrium particles can also sometimes lead to endometriosis.

Cryptomenorrhea may be associated with several diseases including:

Endometriosis is a condition where endometrial glands grow in ectopic (non-physiologic) locations (Pic. 2). Most often this is on the ovaries, fallopian tubes, and tissue around the uterus and ovaries; however, in rare cases it may also occur in other parts of the body. On of the possible origins of endometriosis is via retrograde menstruation – backward flow of menstrual flow and endometrial tissue remnants, which can then implant in ectopic locations. Thus conditions that impair the outward menstrual flow may contribute to endometriosis. The main symptoms are pelvic pain and infertility. Nearly half of those affected have chronic pelvic pain, while in 70% pain occurs during menstruation. Pain during sex is also common. Infertility occurs in up to half of women affected.

A vaginal septum is a congenital partition within the vagina; such a septum could be either longitudinal or transverse. A transverse septum forms either a complete or incomplete obstruction of the vagina. Typically, distal occlusions of female genital tract are associated with hematocolpos or hematometra, which are manifested with cyclic pelvic pain and amenorrhea. The accumulation of menstrual debris behind the septum leads to cryptomenorrhea.

Imperforate hymen (Pic. 3) is a rare condition that presents with amenorrhea, cyclical abdominal pains and urine retention among pubertal girls. It mostly presents during puberty, although diagnoses in utero (before birth) and during the new born period and childhood are also documented. Imperforate hymen lacks the opening through which menstrual debris could be discharged, and is therefore usually detected when menstrual cycle starts.

Hematometra (Pic. 4) is a collection or retention of blood in the uterine cavity. Common symptoms associated with this disorder include amenorrhea or dysmenorrhea in premenopausal women, pelvic pain or pressure, urinary frequency and retention. The decomposing blood in uterine cavity can furthermore lead to infection and endometritis, an inflammation of the uterine cavity lining. Such condition then presents with pelvic or lower abdominal pain and fever. 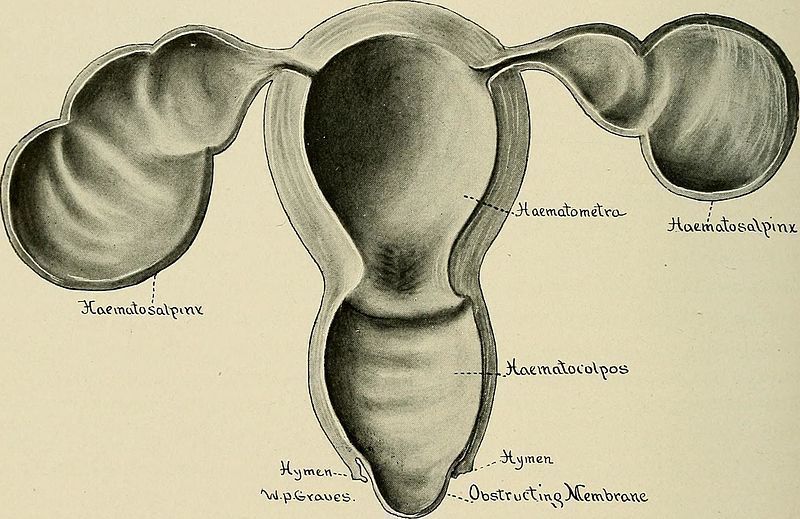 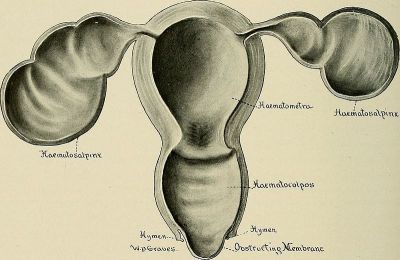 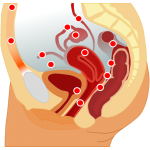 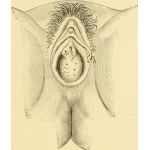 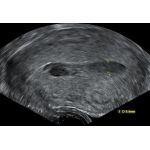 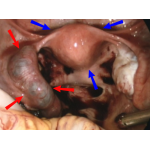