About Decreased level of testosterone

Testosterone is under the control of gonadotropins, which are hormones from the pituitary gland that stimulates development of genitals, start the development of sex cells and controls the levels of sex hormones. The condition in which the gonadotropins are lower than average and do not stimulate enough is called secondary hypogonadism. Sometimes the there is enough of gonadotropins, but the gonads do not respond right and the problem is in gonads themselves. This condition is called primary hypogonadism. Both of the conditions are responsible for the testosterone deficiency. In men, even in women.

A testosterone is any natural or synthetic compound, usually a steroid hormone, that stimulates or controls the development and maintenance of male characteristics in vertebrates. In humans, testosterone is secreted primarily by the testicles of males and, to a lesser extent, the ovaries of females. Small amounts are also secreted by the adrenal glands.

On average, in adult males, levels of testosterone are about 7–8 times as great as in adult females. As the metabolic consumption of testosterone in males is greater, the daily production is about 20 times greater in men. Females are also more sensitive to the hormone.

Testosterone deficiency is a widely recognized hormonal alteration associated with male aging. Its prevalence may be as high as 30% in men aged 40–79 years, and in up to 12% the hypotestosteronemia it can be associated with clinical symptoms.

Symptoms of low testosterone in males consist of loss of libido, impotence, infertility, shrinkage of the testicles, penis, and prostate, diminished masculinization (e.g., decreased facial and body hair growth), low muscle mass, anxiety, depression, fatigue, vasomotor symptoms (hot flashes), insomnia, headaches, and osteoporosis. In addition, symptoms of hyperestrogenism (an excessive amount of estrogenic activity in the body), such as gynecomastia (breast enlargement in men) and feminization (the hormonally induced development of female sexual characteristics), may be concurrently present in males.

In females, hypoandrogenism consist of loss of libido, decreased body hair growth, depression, fatigue, vaginal vasocongestion (which can result in cramps), vasomotor symptoms (e.g., hot flashes and palpitations), insomnia, headaches, osteoporosis and reduced muscle mass. Symptoms of hypoestrogenism (low estrogen levels) may be present in both sexes in cases of severe androgen deficiency (as estrogens are synthesized from androgens).

There is increasing evidence from long-term studies that testosterone deficiency is associated with increased cardiovascular and allcause mortality.

Low testosterone level is also associated with several conditions with impact on fertility such as testicular failure and Klinefelter syndrome.

Testicular failure (TF) is referring to the condition of testicles which are unable to produce sperm or testosterone. 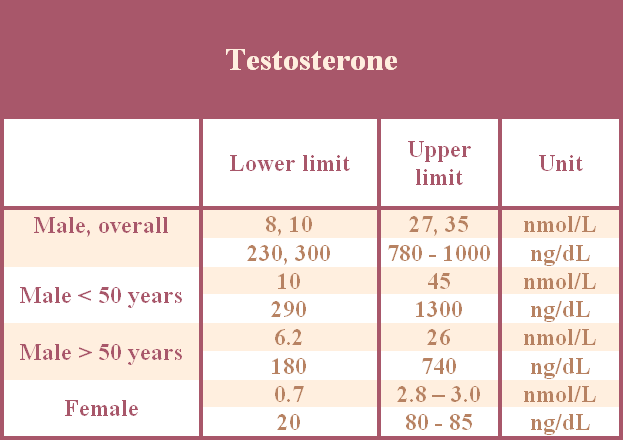 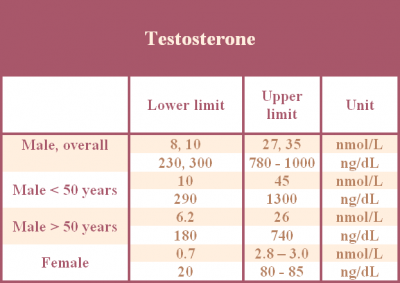