Puberty (Pic. 1) is described as delayed puberty with exceptions when an organism has passed the usual age of onset of puberty (in girls 11 years, in boys 13) with no physical or hormonal signs that it is beginning. Puberty may be delayed for several years and still occur normally, in which case it is considered constitutional delay, a variation of healthy physical development.

Delayed puberty in girls is described by these factors:

Delayed puberty in boys is described as:

Diseases which affect some of endocrine glands can cause delayed puberty. For testicle there are mumps, orchitis, Coxackievirus B, testicular failure, radiation, trauma, tumors or other inflammation, which all can reduce testosterone production and decrease hormonal levels.

Also every disease with impact on ovary can change hormonal ballance and leads to delayed puberty. In pituitary gland there is very often tumours which change the secretion of hormones. Another disorders with hormonal deficiencies and imbalances include hypothyroidism and Cushing’s syndrome (a collection of signs and symptoms due to prolonged exposure to cortisol). But not only organs with direct connections with reproductive system can delay the onset of puberty. There are chronic renal failure, cystic fibrosis or Fraiser syndrome which all leads to deficiency of hormones. Irradiation of body, toxines, surgery, drugs or polytraumatas (the condition of a person who has been subjected to multiple traumatic injuries) with long convalescence may postpone puberty.

Hypogonadotropic hypogonadism, also known as secondary or central hypogonadism is a condition which is characterized by hypogonadism due to an impaired secretion of gonadotropins, including follicle-stimulating hormone (FSH) and luteinizing hormone (LH), by the pituitary gland in the brain (results in a delay or stop of pubertal sexual maturation).

Mumps is a contagious disease that is spread from person to person through contact with respiratory secretions, such as saliva from an infected person. The common symptoms of mumps include inflammation of the salivary glands, pancreas, and testicles; fever, and headache. Inflammation leads to scarring the testicular tissue which reduces the production of testosterone. Testosterone has androgenic effects which at puberty include a deepening of the voice, growth of facial hair (such as the beard) and axillary (underarm) hair.

Ischemic orchitis may result from damage to the blood vessels of the spermatic cord during inguinal herniorrhaphy, and may in the worst event lead to testicular atrophy. Atrophied testicles also produce less hormones. Low amount of hormones is not able to trigger puberty in right time.

When the cancer is not spread in both testicles/ovaries, a man/woman with one remaining testis/ovary has enough tissue which still can produce hormones. A man/woman who lost both testicles/ovaries needs to take hormonal substitution (any form of hormone therapy wherein the patient, in the course of medical treatment, receives hormones, either to supplement a lack of naturally occurring hormones or to substitute other hormones for naturally occurring hormones).

Androgen insensitivity syndrome (AIS) is a condition that results in the partial or complete inability of the cell to respond to androgens (steroid hormones). The unresponsiveness of the cell to the presence of androgenic hormones can impair or prevent the masculinization of male genitalia in the developing fetus, as well as the development of male secondary sexual characteristics at puberty, but does not significantly impair female genital or sexual development.

Amenorrhoea is a symptom with many potential causes. Delay in pubertal development will lead to primary amenorrhoea (menstruation cycles never starting). 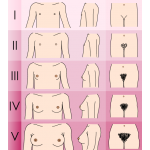 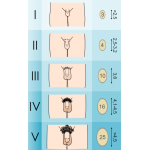