The condition when there are elevated levels of insulin within the blood in relation to levels of glucose.

The presence of elevated insulin levels in blood while glucose concentration remains on basic or near basic level is called hyperinsulinemia. Hyperinsulinemia can result from a variety of metabolic diseases and conditions and it is to be associated with metabolic syndrome defined by hypertension, obesity, dyslipidemia (higher concentration of lipids in the blood) and glucose intolerance. Hyperinsulinemia can also lead to development of relatively common diseases such as diabetes, hypoglycaemia, cardiovascular diseases and reproduction related disorder called polycystic ovary syndrome (PCOS) and coherent anovulation. Although insulin is one of the main hormones of energetic metabolism, it can also have great impact on genital system through the influence on hypothalamus-hypophysis-ovary axis which is the name for hormonal cascade regulating the function of female gonads. Since there are many identical hormones in that axis that also play role in male hormonal regulation of reproductive system it is obvious that elevated insulin levels can also negatively influence male reproductive system.

There are some terms closely related to hyperinsulinemia and PCOS such as insulin resistance (Pic. 1). Insulin resistance (IR) describes the statement when there is impaired response of receptors in cells to the presence of insulin. This impaired responds causes the inability of a cell to receive glucose (basic energetic source) and it causes higher insulin production and exhaustion of pancreatic insulin-producing β cells. Insulin resistance is supposed to anticipate the condition called metabolic syndrome and it is also thought to play important role in the development of PCOS and consequential anovulation. IR can develop as an adaptation to constantly elevated insulin levels in the blood. Since insulin plays important role as a signalling molecule in many cells, the development of the IR can cause the malfunction of insulin-dependent cells (e.g. adipocytes; cells of adipose tissue).

Another closely related term to hyperinsulinemia is the condition called hyperandrogenism (Pic. 1). It seems that insulin may play part in the development of the typical increased amplitude and frequency of GnRH (gonadotropin releasing hormone) and LH (luteinizing hormone) pulse secretion seen in PCOS. It is thought that insulin may induce GnRH production of hypothalamus through stimulating cell’s signalling pathway leading to its increased secretion. As consequence, elevated GnRH levels cause the elevated production of LH. This continuous stimulation would translate into increased synthesis of ovarian steroid hormones, particularly androgens. On the other hand, insulin also reinforces adrenal glands as an alternate androgen source parallel to ovaries, by potentiating hypothalamus-hypophysis-adrenal axis (HHAA) activity at several key sites. The hippocampus is an important mediator of HHAA negative feedback, by inhibiting hippocampal activity insulin indirectly enhances hypothalamic corticotropin-releasing hormone (CRH) secretion although it may also play a direct role in both the hypothalamus and the hypophysis. Insulin also appears to augment adrenal cortex sensitivity to adrenocorticotropic hormone (ACTH) stimulation, with increased androgen secretion.

Polycystic ovary syndrome (PCOS) is an endocrine-metabolic disorder characterized by multiple hormonal imbalances causing the development of cysts on the ovaries. The presence of such cyst on the ovaries intensifies the hormonal imbalance. Most obvious clinical presentation of PCOS is anovulation, amenorrhea, oligomenorrhoea, hyperandrogenism and related infertility. Nevertheless, the manifestations of PCOS are not confined to the gynecological area (Pic. 2). Women afflicted by this disease show an increased prevalence of several conditions including obesity, dyslipidemia, hypertension, hirsutism, metabolic syndrome (MS), and type 2 diabetes mellitus which are all related to unbalanced insulin production/concentration. Insulin resistance appears to be an essential pathophysiologic mechanism in the development of all metabolic complications of PCOS. Compensatory hyperinsulinemia appears to mediate many of these deleterious effects. This phenomenon derives as a response of pancreatic β cells in order to preserve lipid and carbohydrate homeostasis in face of diminished insulin sensitivity. The underlying hormonal imbalance created by a combination of increased androgens and/or insulin underpin PCOS. Current observations indicate that obese women suffering from severe PCOS have also major hyperinsulinemia and insulin resistance.

Anovulation is the condition when there is no oocyte being ovulated during a menstruation. It is a common cause of infertility, since there is and oocyte missing the conception cannot happen. Most prevalent source of anovulation is the hormonal imbalance. The process of ovulation is regulated through hypothalamus-hypophysis-ovary axis, a signalling hormonal pathway from the hypothalamus to the ovary and back. As described above, unbalanced levels of insulin can negatively influence the function of this axis and consequentially cause the anovulation. Hyperinsulinemia can cause increased LH levels and consequential increased production of androgens by the ovaries which restrains the ovulation. Secondly, the positive correlation between hyperinsulinemia, insulin resistance and obesity is well documented, so there is no surprise in the fact that anovulation is more likely to happen to obese women. Ultimately, anovulation is one of the most common signs of PCOS. 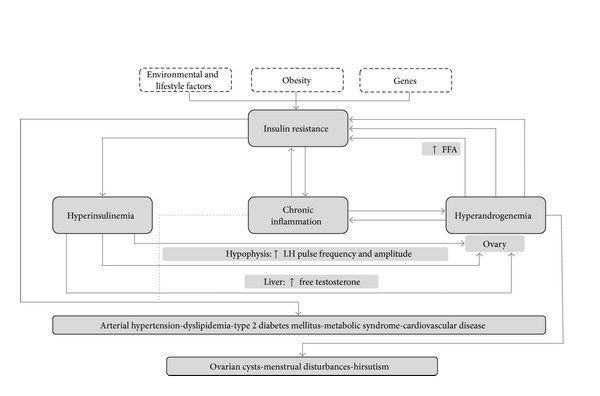 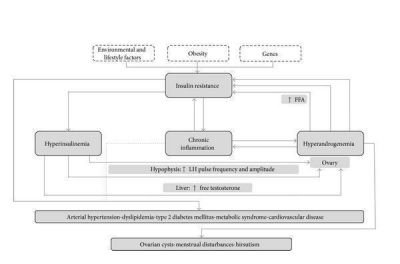 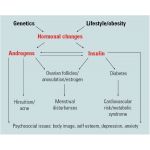