About Elevated level of prolactin

Hyperprolactinaemia is the presence of abnormally high levels of prolactin (PRL) in the blood. Normal levels are less than 500 mIU/L [20 ng/mL or µg/L] for women, and less than 450 mIU/L for men (Pic. 1). Levels above this volume are considered as hyperprolactinaemia. Hyperprolactinemia is a common problem which is encountered in reproductive disorder.

Prolactin is one of several hormones that are produced by the pituitary gland (Pic. 2). PRL has many different roles throughout the body, and most of those are clearly shown as clinical symptom. Perhaps the most important classical role of prolactin is to stimulate milk production in women after the delivery of a baby. Prolactin levels increase during pregnancy causing the mammary glands to enlarge in preparation for breastfeeding and ready to secrete colostrums (a form of milk produced by the mammary glands during pregnancy, colostrum contains higher amount of antibodies to protect the newborn against disease) closely after delivery. Later on the elevated prolactin levels help with the sustained production of milk during nursing.

During the first several months of breastfeeding, the higher basal prolactin levels also serve to suppress ovarian cyclicity, through the inhibition of pituitary hormones, mainly via LH (luteinizing hormone) suppression (to put an end to the activities of LH hormone). This is the reason why women who are breastfeeding do not get their periods and therefore do not often become pregnant. In actively breastfeeding mothers the related hyperprolactinaemia persisting even over a year.

Hyperprolactinemia is usually associated with menstrual and ovulatory disorders like amenorrhea (absence of menstruation), oligomenorrhea (infrequent menstruation), anovulation, ovulatory cycle with short or inadequate luteal phase and galactorrhea (lactation in women who are not breastfeeding).

The function of prolactin in men is not well- known. High levels of prolactine can causes a lower sex drive and loss of body hair.

Elevated level of prolactin may be associated with several diseases including:

High levels of proclactine is considered as the most frequent cause of anovulatory sterility, although spontaneous pregnancy may occur occasionally. In young women, hyperprolactinemia is probably one of the most common endocrine disorders related to pituitary function.

Clinically significant elevation of PRL levels may cause infertility in several different ways. First, prolactin may stop a woman from ovulating. Without ovulation it is not possible to concieve a child. If this occurs, a woman’s menstrual cycles will stop.

In less severe cases, high prolactin levels may only disrupt ovulation once in a while. This would result in intermittent ovulation or ovulation that takes a long time to occur. Women in this category may experience infrequent or irregular periods.

Women with the mildest cases involving high prolactin levels may ovulate regularly but not produce enough of the hormone progesterone after ovulation. This is known as a luteal phase (the latter phase of the menstrual cycle which begins with the formation of the corpus luteum- a temporary endocrine structure in female ovaries that is involved in the production of relatively high levels of progesterone) defect. Deficiency in the amount of progesterone produced after ovulation may result in a uterine lining that is less able to have an embryo implant. Some women with this problem may see their period come a short time after ovulation.

PCOS ( a set of symptoms due to elevated androgens (male hormones) in females) is a common problem that can cause infertility by inhibiting ovulation, affecting 3.5- 10% of the reproductive age of women. For unknown reasons, some women with PCOS may have slightly high PRL levels. PCOS similar to hypoprolactinemic are both common causes of secondary amenorrhoea in women. The relationship between PCOS and hyperprolactinemia so far has been reported still with controversial results: it seems that PCOS is very prevalent with hyperprolactinemia, nevertheless there are different reasons of altered regulation of gondotropin secretion, and suggests that these conditions have independent origins. Recent investigators using serial serum sampling have excluded transient elevations of PRL and have shown a less frequent association of these two disorders. According to clinical guidelines PCOS patients with increased PRL levels must be investigated for other causes of hyperprolactinemia, because hyperprolactinemia may be due to a reason of concomitant disease, but not proved the cause-relationship to PCOS. 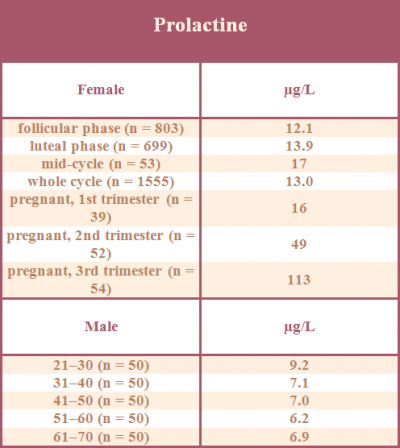