Enlargement and swelling of breast tissue in men.

About Enlarged breasts in men

Enlarged breasts in men represent growth and swelling of tissue of the mammary glands and surrounding tissues. Enlarged breasts in men may signallize many different medical conditions, which can be generally divided into tumorous and non-tumorous. Tumorous underlying causes are represented mainly by breast cancer in men, and are therefore rare. Non-tumorous enlargement of breasts in men, commonly called gynecomastia, is much more common and can occur out of either physiologic or non-physiologic causes.

Typically gynecomastia presents with swollen breast glandular tissue, resulting in visible enlargement of the breast (Pic. 1) and palpable as soft, mobile subcutaneous tissue masses. Breast tenderness is also common. This enlargement may occur on one side or both. An increase in the diameter of the areola and asymmetry of chest tissue are other possible signs of gynecomastia. Dimpling of the skin and nipple retraction are not typical features of gynecomastia. Milky discharge from the nipple is also not a typical finding, but may be seen in a gynecomastic individual with a prolactin secreting tumour.

Gynecomastia is thought to be caused by an altered ratio of estrogens (the primary female sex hormones) to androgens (male sex hormones) mediated by an increase in estrogen production, a decrease in androgen production, or a combination of these two factors. Estrogen acts as a growth hormone to increase the size of male breast tissue. The cause of gynecomastia is unknown in around 25% of cases. Drugs are estimated to cause 10–25% of cases of gynecomastia. The increase in breast size due to the accumulation of fatty tissue, as seen in obese patients, is considered pseudogynecomastia.
True gynecomastia may or may not be associated with pathological conditions as this can be the result of the usual physiologic development. Gynecomastia is common in normal males in the neonatal period, at early puberty, and with increasing age. Prevalence of asymptomatic gynecomastia is 60%–90% in neonates, 50%–60% in adolescents, and up to 70% in men age 50–69 years. Prevalence of symptomatic gynecomastia is markedly lower. Physiologic gynecomastia is common in adolescents at the time of puberty with published incidence rates of 25 to 65% by the ages of 14. By the time pubertal changes are completed and hormonal levels stabilized, the persistence of gynecomastia is uncommon.
Non-physiologic gynecomastia may be caused by various conditions that alter the ratio of estrogens and androgens in the body. Conditions affecting the reproductive organs include some types of testicular tumors, prolactin-secreting tumors of the pituitary gland, Klinefelter syndrome and antiandrogen therapy for prostate cancer. The estrogen and androgen ratio may be furthermore altered by many other conditions, including various other drugs, chronic diseases such as liver cirrhosis, cystic fibrosis, ulcerous colitis, or some other types of tumors, such as adrenal or lung carcinomas.
Enlarged breasts in men may be associated with several diseases including:

Hypogonadism
Hypogonadism generally denotes any decrease in the function of sex glands, with lower production of the sex hormones. Hypogonadism may be either primary, originating form a dysfunction of the testes in males. This subsequently leads to decreased production of testosterone (the primary male sex hormone), altering the estrogen-androgen ratio and possibly leading to gynecomastia. Klinefelter´s syndrome, mentioned further in the text, is an example of primary hypogonadism. Secondary hypogonadism may manifest with gynecomastia as well, although it originates from a dysfunction of the pituitary gland, which does not properly stimulate the testis to produce testosterone.
Testicular cancer
Certain testicular tumors manifest themselves by production of hormonally active compounds, that may alter the estrogen-androgen ratio, and subsequently cause gynecomastia. These include so called sex cord tumors, arising from the Sertoli and Leydig cells of the testis. Sex cord tumors of the testis in post pubertal men are rare. The other tumor that can be hormonaly active and cause gynecomastia is called choriocarcinoma, which belongs to a group of germinal cell tumors (Pic. 2). Testicular choriocarcinoma is one of the rarest variants of testicular germ cell tumours, accounting for less than 1% of testicular germ cell tumours and only about 0.19% of all testicular tumours.
Prolactinoma
A prolactinoma is a benign tumor (adenoma) of the pituitary gland that produces a hormone called prolactin. It is the most common type of functioning pituitary tumor. Prolactin stimulates the breast to produce milk, and has many other functions such as regulation of mood. Increased prolactin-mediated stimulation of the breast glandular tissue may result in its growth and subsequent gynecomastia in men.
Klinefelter syndrome
The term Klinefelter syndrome (KS) describes a group of chromosomal disorder in which there is at least one extra X chromosome to a normal male karyotype, 46,XY. Klinefelter syndrome (Pic. 3) is a notable example of a disorder that causes hypogonadism (decreased function of the sex glands), gynecomastia, and has a higher risk of breast cancer in males (20–50 times higher than males without the disorder).
Images 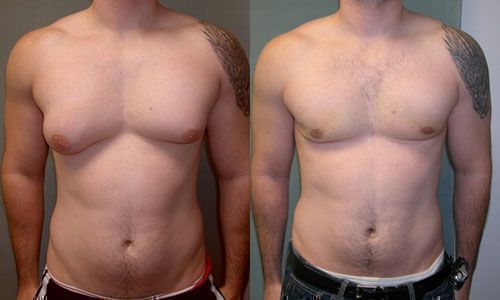 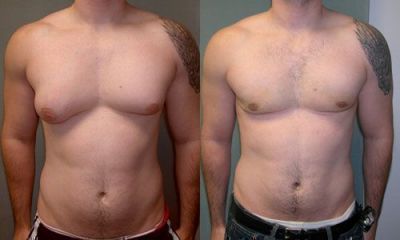 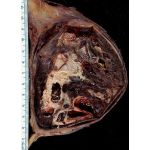 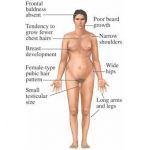