Enlarged veins in the scrotum

The symptom of varicocele.

About Enlarged veins in the scrotum

Enlarged veins in the scrotum are among the symptoms of varicocele. Upward flow of blood in the veins is ensured by small one-way valves that prevent backflow. Defective valves, or compression of the vein by a nearby structure, can cause dilatation of the testicular veins near the testis, leading to the formation of a varicocele.

Varicocele is an abnormal dilation of the pampiniform venous plexus in the scrotum that develops during puberty (Pic. 1), it can affect testicular growth and semen parameters, and is considered to be a major cause of male infertility. This plexus travels along the posterior portion of the testicle with the epididymis (a tube that connects a testicle to a vas deferens in the male reproductive system) and vas deferens (the duct which conveys sperm from the testicle to the urethra), and then into the spermatic cord. This network of veins coalesces into the gonadal, or testicular, vein. The right gonadal vein drains into the inferior vena cava, while the left gonadal vein drains into the left renal vein at right angle to the renal vein, which then drains into the inferior vena cava. One of the main functions of the plexus is to lower the temperature of the testicles.

Varicocele should be evaluated in the standing position, in a warm room. The scrotum should be first examined to rule out evident discrepancy in the aspect with evident dilatations of the veins of the pampiniform plexus. Afterward the patient should perform a Valsalva manoeuvre (is performed by moderately forceful attempted exhalation against a closed airway, usually done by closing one's mouth, pinching one's nose shut while pressing out as if blowing up a balloon). With the patient supine the palpation of the testes should be performed to check for testis consistency and volume discrepancy. The evaluation of varicosity, according to the most used classification proposed by Dubin and Amelar (Pic. 2), should be graded as follows: I = small sized only palpable during Valsalva manoeuvre, II = medium sized palpable at rest, and grade III = large sized visible at rest. 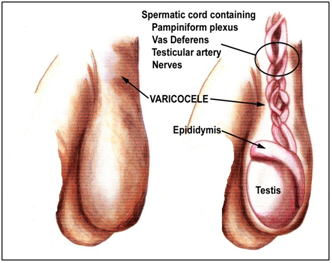 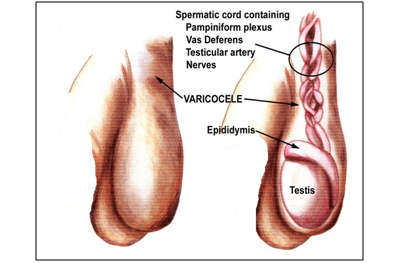 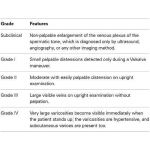