Hot flashes are typically perceived as sudden and intense feelings of warmth, usually most intense over the chest, head and neck. They are usually accompanied by rapid heartbeat and redness of the face (hot flush), increased sweating, and sometimes the feeling like one’s going to faint. They usually last only a few minutes and end rapidly. Afterwards, they may be followed by a chilled feeling when the warmth has subsided. If they occur at night, they are called night sweats, and may cause the patient to wake up in the night. Hot flashes are generally more frequent and more intense in warm weather or in an overheated environment. They vary in frequency and duration, but can usually persist for several years.

Hot flashes are generally caused by changes in hormone levels. They are most frequently seen in women during menopause and perimenopause (the time before and after menopause).

Hot flashes are one of the typical symptoms of approaching menopause (Pic. 1), and the time before and after, called perimenopause. The natural decline in circulating estrogen (the primary female sex hormone) probably causes changes in blood vessel reactivity, leading to episodes of hot flashes. Menopausal and perimenopausal women may experience „normal“ hot flashes, that come on and subside rapidly, in matter of minutes. However, they may also experience slow, „ember“ flashes. These flashes are less intense and may last around half an hour. Hot flashes are more frequently seen in menopausal women who smoke, have a high BMI (body mass index) or are of African-American descent.

Menopausal and perimenopausal women, who may experience hot flashes as a symptom of menopause, may also suffer from endometrial hyperplasia.

Endometrial hyperplasia is a condition of abnormal thickness of the endometrium (the mucous membrane lining the uterine cavity). It usually presents with abnormal vaginal bleeding, vaginal bleeding after menopause, longer periods or heavy menstrual bleeding.

Endometrial hyperplasia generally arises when there is a relative increase in estrogen compared to progesterone (hormone released during the second half of menstrual cycle, and continuously in pregnancy). In menopausal and perimenopausal women, this may be caused by the cessation of ovulation, and therefore a cessation of progesterone production. Estrogen is produced in tissues other than the ovary, for example fat tissue. Therefore, elevated estrogen level can be also seen in obese women. Another possible cause of endometrial hyperplasia is the administration of unopposed estrogen (without simultaneous administration of progesterone or progestins) in hormonal replacement therapy, which is often used to treat menopause symptoms. Although not a serious health risk in most cases, endometrial hyperplasia can evolve into uterine cancer. Therefore, consulting a gynecologist is advised when the patient present with symptoms of endometrial hyperplasia.

Younger women who are menstruating or expecting to menstruate soon (the premenstrual period typically lasts one week) may encounter hot and/or cold flashes. These episodes do not usually last long, with feelings of cold and heat alternating over the course of as short as a minute. If they occur at other times in a young woman's menstrual cycle, then it might be a symptom of a problem with her pituitary gland.

Hot flashes usually persist for several years, with some women having them for more than 10 years. The symptoms of menopause may be relieved by hormone replacement therapy (HRT). This therapy utilizes the administration of exogenous estrogen and progestins (analogues of progesterone) to counter the menopause symptoms. However, HRT increases the risk of breast cancer, stroke, and dementia and has other potentially serious short-term and long-term risks. Therefore, it is not advised as the first line of treatment. If the patient wishes to take the hormones, they should be administered at the lowest possible doses. In addition to traditional hormone replacement therapies, there are other strategies and natural supplements available to try. Such natural supplements include Yam (vegetable), black cohosh, and evening primrose. These natural supplements are used in natural creams and lotions. 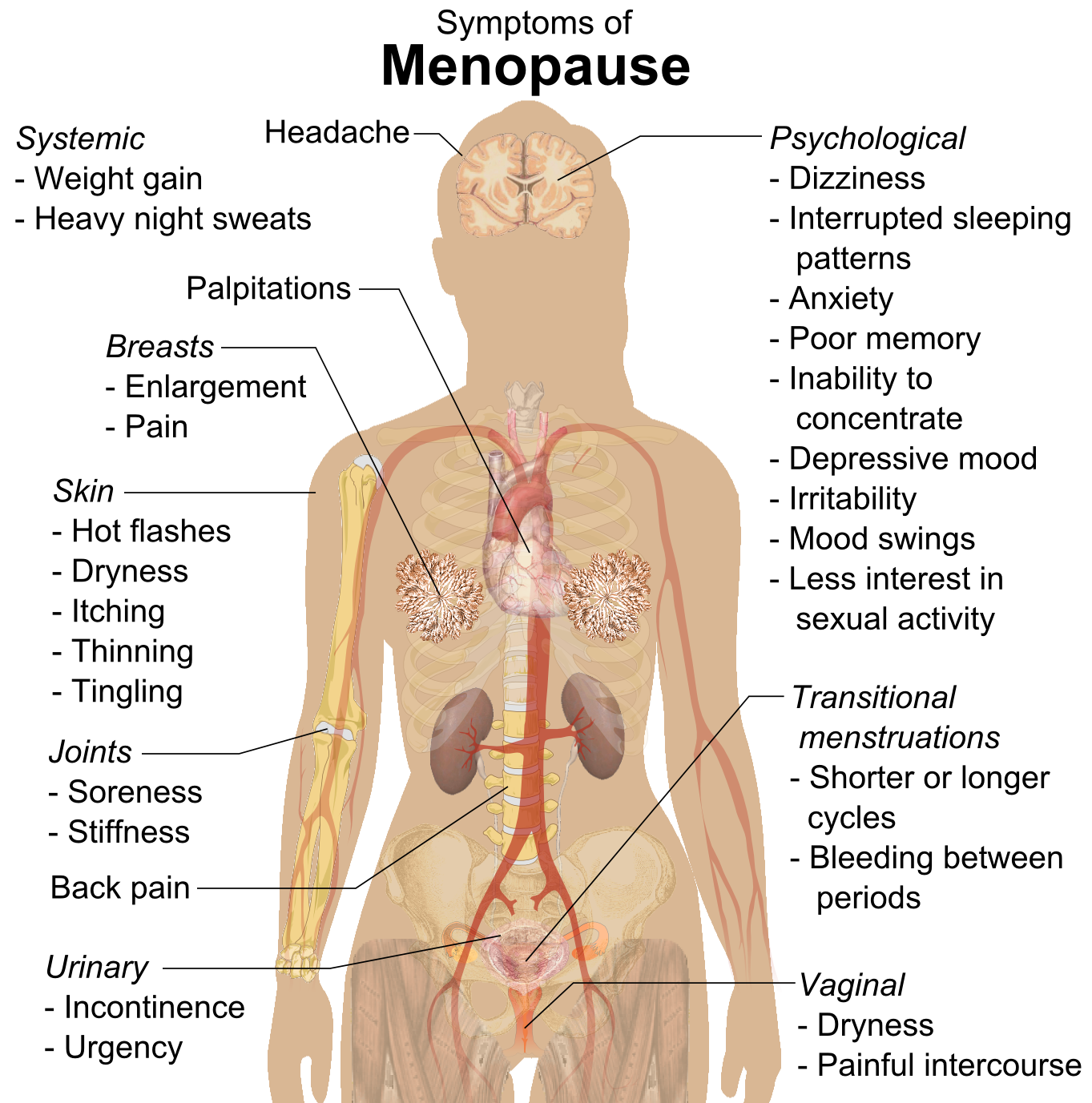 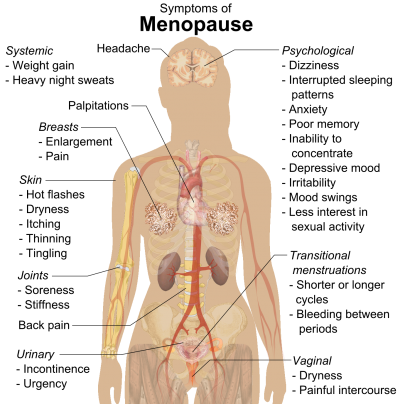