Serum progesterone concentration below the lower limit of the reference range.

About Low level of progesterone

The main physiological roles of progesterone are as follows:

When the corpus luteum fails to produce sufficient amount of progesterone, the endometrium doesn’t undergo the secretory changes in the secretory phase, and is not capable of supporting the implantation of an embryo. This in turn results in infertility or in recurrent pregnancy loss.

Deficiency symptoms
Progesterone deficiency most notably causes menstrual irregularities and anovulation. Because estrogen (the primary female sex hormone) may become the dominant hormone, the woman may also experience heavy menstrual bleeding with cramping, breast tenderness or weight gain. Progesterone deficiency brought on by menopause is also associated with other menopause symptoms, such as fatigue, hot flashes, mood swings, vaginal dryness, lower sexual desire and depression.
Effect on fertility
In nonpregnant women, low levels of progesterone may lead to irregular or absent periods and abnormal uterine bleeding. They may also experience mood swings, depression and low sex drive. Progesterone is necessary for the changes of the endometrium during the luteal phase, including the thickening of the endometrium and growth and activity of the endometrial glands. These changes are necessary for the succesful implantation of the fertilized egg, and therefore for the initial stage of pregnancy. Without these changes in the endometrium, the fertilized egg will not be able to implant, and pregnancy will not occur.
Causes and associated conditions
Low levels of progesterone are seen in conditions of hypogonadism (insufficient function of the sex glands) with a failure of the ovary to produce the sex hormones estrogen and progesterone. Hypogonadism may be caused either by insufficient hormonal stimulation of the ovary from the superior centres, the pituitary and the hypothalamus (so-called hypogonadotropic hypogonadism), or by a disorder of the ovary itself – such as destruction of the ovary due to trauma, ovarian torsion, infection or poisoning (so-called hypergonadotropic hypogonadism). However, in hypogonadism, there is low level of estrogen as well.
Apart from conditions of hypogonadism, low levels of progesterone are seen in several pathological conditions, including:
Luteinized unruptured follicle syndrome (LUFS)
LUFS stands for the luteinisation (changes typical for the luteal phase of the ovarian cycle) of ovulatory follicle without releasing an oocyte. Therefore, it can be considered as a form of anovulation. As it is a disorder united with the start of so-called luteal phase, it may be also characterized as luteal phase defect. It seems that LUFS is related to hormonal imbalance causing the detention of oocyte within the follicle even though the follicle itself transforms under LH (luteinizing hormone) influence into corpus luteum. The oocyte detention prohibits the conception, yet menstrual cycle is in any other aspect undergoing normally without any side effects. Regarding the importance of progesterone and its role in the ovulation, it is reasonable to assume that its lowered levels may be responsible for LUF to happen.
Endometriosis
Endometriosis is a condition in which pieces of the endometrium grow outside the uterine cavity, such as in the muscular portion of the uterine wall or in the surrounding organs. About 40% of women with endometriosis are infertile. Low levels of progesterone are associated with endometriosis, and may contribute to its detrimental effect on fertility.
Polycystic ovary syndrome (PCOS)
Polycystic ovary syndrome is a condition in which a woman has an imbalance of female sex hormones and cysts in the ovaries. PCOS is the most common cause of menstrual disturbance such as oligomenorrhea (infrequent or very light menstruation), anovulation (the condition of no eggs being released from the ovary), menorrhagia (excessively heavy menstrual flow), and infertility. The level of progesterone is decreased in PCOS which cannot suppress LH (luteinizing hormone) pulse frequency in PCOS; therefore, increased estrogen secretion may contribute to the aforementioned complications. Polycystic ovary syndrome causes more than 75% of cases of anovulatory infertility. Not all women with PCOS have difficulty becoming pregnant. For those who do, anovulation is a common cause. 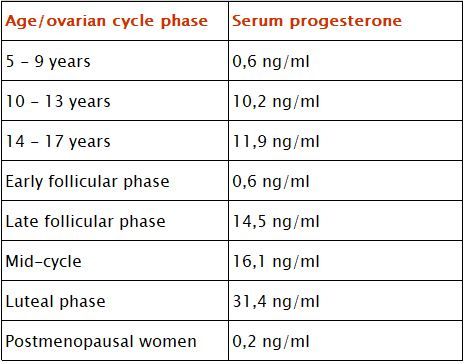 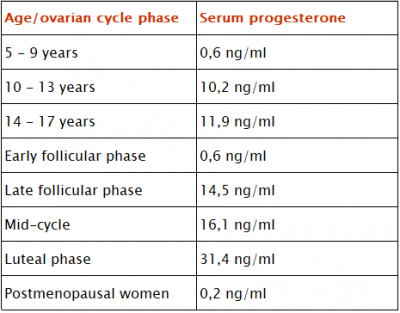 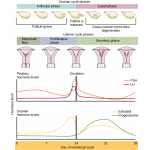 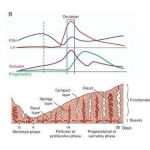