Painful sexual intercourse is problem affecting women as well as men, although in men it is much less common. It is especially highly prevalent problem among women and it is recognized as common cause of female sexual dysfunction (FSD). FSD is defined as disorders of desire, arousal, orgasm, or pain that could cause emotional distress. As such, dyspareunia is a multifactorial issue that involves physical, social and psychological dimensions.

The painful feeling during sexual intercourse can be classified as superficial or deep depending on the location of the pain. Superficial dyspareunia results from pain at the vaginal introitus upon penile penetration, whereas deep dyspareunia occurs with deep thrusting of the penis. Superficial dyspareunia is more prevalent and it is associated with penile entry. Dyspareunia has been estimated to have a lifetime incidence of over 60% in women. The list of physical disorders related with dyspareunia is very extend (Pic. 1) and defining the cause may represent quite challenge.

There are many causes of dyspareunia starting with psychological problems such as anxiety and depression leading to suppression of sex hormones. This may be caused for example by partner’s performance and technique that can give rise to uncomfortable feelings leading to stress during sexual intercourse. The stress evokes hormonal changes which interfere with proper function of genitalia. Stress may be also result of lack of a partner's relationship quality and conflict and/ or lack of privacy, among many other reasons. Sociocultural causes leading to stressful conditions and consequential dyspareunia may include: inadequate education, conflict with religious, personal, or family values and societal taboos.

Dyspareunia may appear naturally in menopausal/postmenopausal women resulting from physiological aspects of the body. The hormonal balance within postmenopausal women changes drastically in comparison with reproductive women which also manifest by lack of oestrogen (sex hormone) production. The low levels of oestrogen within postmenopausal women often manifest by vaginal dryness and consequential dyspareunia. On the other hand, too high oestrogen levels may also cause dyspareunia like in case of endometrial hyperplasia which is the excessive growth of endometrial tissue (inner layer of uterus) under effect of elevated levels of oestrogen. Elevated levels of prolactin (hyperprolactinaemia), the hormone which takes main part in breast milk production, is known to reduce oestrogen levels.

Among physical pathological conditions leading to dyspareunia, the infectious diseases of urogenital tract are prevalent. Cervicitis refers to cervical infections, urethritis refers to urethra infections, endometritis is the infection of inner layer of uterus called endometrium, vaginitis denominates the infections of vagina. Pelvic inflammatory disease or pelvic inflammatory disorder (PID) is an infection of the upper part of the female reproductive system namely the uterus, fallopian tubes, or the ovaries. All of these infectious diseases are related with local inflammation which is a natural reaction of the body to any infection. Among other effects, the inflammations stimulate neural sensitivity and leads also to local swelling in the area of infection. Together those two factors induce the painful feelings.

Dyspareunia is also connected with tumours located in or nearby reproductive tract. Uterine fibroids (benign tumour), ovarian cancer and endometrial cancer can result into painful feelings in pelvic area due to abnormal growth of tissue and hormonal changes.

Among the less prevalent causes, some syndromes are also related with dyspareunia. Namely Fitz-Hugh-Curtis syndrome (PID complication involving liver capsule inflammation), piriformis syndrome (a pathological interaction between specific muscles and nerves leading to painful feelings within lower parts of body) and others. Dyspareunia may be also caused by morphological alterations of genitalia and nearby tracts leading to painful feelings during sexual intercourse such as congenital vaginal septum malformations (and closely related uterine septum), rectal prolapse (protrusion of rectal walls outside the body), retroverted uterus and others.

Among inflammatory diseases, endometriosis should be also mentioned in terms of fertility related dyspareunia causes. The presence of endometrial tissue within the pelvic/abdominal region outside of the uterus is registered by the body as a pathological agent that give arise to immunity reaction and consequential inflammation. This may also cause dyspareunia. As the origin of the pain does not come from genitalia, it is classified as deep dyspareunia.

Adenomyosis is another fertility related disorder that gives arise to painful feelings during intercourse. It is the growth of endometrial glands forming inner layer of uterus into the myometrium (muscle middle layer of uterus).

The most common benign smooth muscle tumours of the uterus encountered in women of reproductive age. Typically, fibroids appear as well-defined, solid masses with a whorled appearance. Uterine fibroids grow from the uterine muscle and are under the hormonal influence of oestrogen, that is why they do not exist before the secretion of this hormone before puberty. Dyspareunia is one of many symptoms of this disease.

In men, there are a number of physical factors that may cause sexual discomfort. Pain is sometimes experienced in the testicular or glans area of the penis immediately after or during ejaculation. The pain in this area may be also related to other ejaculatory disorders. Infections of the prostate, bladder, or seminal vesicles can lead to intense burning or itching sensations following ejaculation. Men suffering from interstitial cystitis (inflammatory condition of bladder) may experience intense pain at the moment of ejaculation (painful ejaculation). Gonorrhoeal infections (sexually transmitted diseases) are sometimes associated with burning or sharp penile pains during ejaculation. Urethritis or prostatitis can make genital stimulation painful or uncomfortable.

Anatomic deformities of the penis, such as exist in Peyronie's disease (penile connective tissue disorder united with chronic inflammation), may also result in pain during coitus. Other cause of painful intercourse is due to the painful retraction of a too-tight foreskin, occurring either during the first attempt at intercourse or subsequent to tightening or scarring following inflammation or local infection. Painful intercourse may appear also due tension in a short and slender frenulum, frenulum breve, as the foreskin retracts on entry to the vagina irrespective of lubrication. During vigorous or deep or tight intercourse or masturbation, small tears may occur in the fraenum of the foreskin and can bleed and be very painful and induce anxiety which can become chronic if left unresolved.

Dyspareunia may be also caused by hormonal imbalance like in case of hyperprolactemia. In men, hyperprolactinaemia may lead to hypogonadism (reduced function of gonads) and erectile dysfunction. 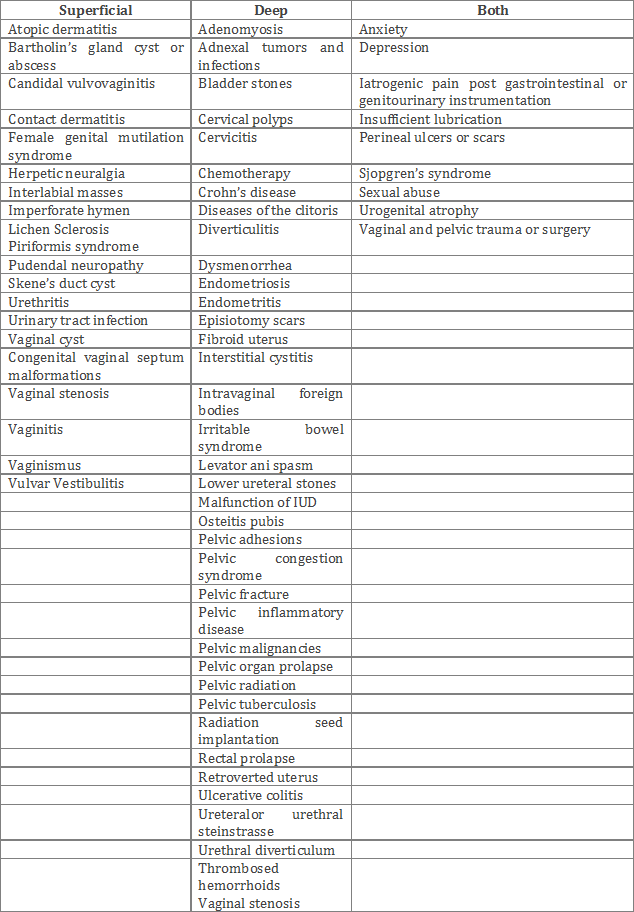 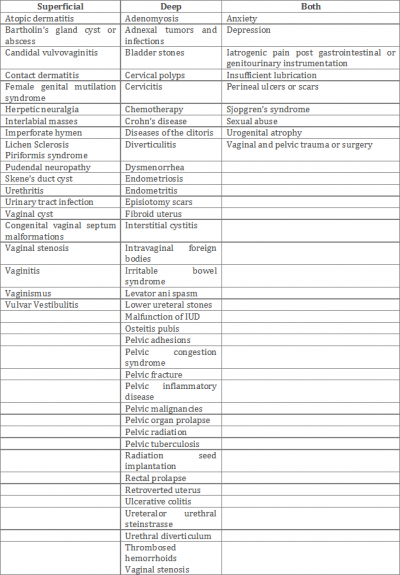