An inflammation of the peritoneum, usually caused by an infectious organism that is introduced into the abdominal cavity.

Peritonitis is an inflammation of the peritoneum (Pic. 1), the thin tissue that lines the inner wall of the abdomen and covers most of the abdominal organs. Peritonitis may be localized (in a certain area) or generalized (spread throughout the body), and may result from infection often due to rupture of a hollow organ as may occur in abdominal trauma or appendicitis or from a non-infectious process.

The main manifestations of peritonitis are acute abdominal pain, abdominal tenderness, and abdominal guarding, which are exacerbated by moving the peritoneum by coughing, flexing one's hips, or eliciting the Blumberg sign (pain upon removal of pressure rather than application of pressure to the abdomen). Diffuse abdominal rigidity ("washboard abdomen") is often present, especially in generalized peritonitis. Other symptoms include fever, sinus tachycardia (sinus rhytm with more than 100 beats per minute), and development of intestinal paralysis, which also causes nausea, vomiting, and bloating.

Other possible causes of peritonitis include:

Perforation of part of the gastrointestinal tract (Pic. 2) is the most common cause of peritonitis. Other possible reasons for perforation include abdominal trauma, ingestion of a sharp foreign body (such as a fish bone, toothpick or glass shard), perforation by an endoscope or catheter, and internal leakage of a colostomy (surgery for colon cancer) site. In most cases of perforation of a hollow viscus (an internal organ of the body), mixed bacteria are isolated from the infection.

Disruption of the peritoneum, even in the absence of perforation of a hollow viscus, may also cause infection simply by letting micro-organisms into the peritoneal cavity. Examples include trauma, surgical wound, continuous ambulatory peritoneal dialysis, and intra-peritoneal chemotherapy.

Spontaneous bacterial (Pic. 3) peritonitis is a peculiar form of peritonitis occurring in the absence of an obvious source of contamination. It occurs in patients with excess fluid in their abdomens, particularly in children. Intra-peritoneal dialysis (uses a peritoneum as a filter for dialysis) predisposes a patient to peritoneal infection. Systemic infections such as tuberculosis (Pic. 4) may rarely have a peritoneal localization.

Sterile abdominal surgery, under normal circumstances, causes localized or minimal generalized peritonitis. However, peritonitis may also be caused by the rare case of a sterile foreign body inadvertently left in the abdomen after surgery (e.g., gauze, sponge).

Complications of peritonitis include sequestration of fluid and electrolytes, as revealed by decreased central venous pressure, which may cause electrolyte disturbances (unbalanced electrolytes), as well as significant hypovolemia (decreased blood volume), possibly leading to shock and acute renal failure. A peritoneal abscess may form and sepsis may develop, so blood cultures should be obtained.

Depending on the severity of the patient's state, the management of peritonitis may include supportive measures, antibiotics, or surgery. General supportive measures include vigorous intravenous rehydration (infusion of liquid substances directly into a vein) and correction of electrolyte disturbances. Surgery is needed to perform a full exploration and lavage of the peritoneum, as well as to correct any gross anatomical damage that may have caused peritonitis. The exception is spontaneous bacterial peritonitis, which does not always benefit from surgery and may be treated with antibiotics in the first instance.

If properly treated, typical cases of surgically correctable peritonitis (e.g., perforated peptic ulcer, appendicitis (inflammation of the appendix), and diverticulitis (inflammation of the diverticulum) have a mortality rate of <10% in otherwise healthy patients, which rises to about 40% in the elderly, and/or in those with significant underlying illness, as well as in cases that present late (after 48 hours). If untreated, generalized peritonitis is almost always fatal.

Uterine fibroids are benign tumors of the smooth muscle cells found in the human uterus. Fibrioids can undergo a degeneration (necrosis) whom delayed diagnosis may result in ischemic necrosis (cell death caused by hypoxia (low oxygen levels) resulting from local deprivation of blood supply) and continuous abdominal pain, which in turn could lead to peritonitis.

The inflammation of peritoneum can lead to inflammation and scarring of the fallopian tubes called salpingitis.

Hydrocele is the accumulation of the fluid around a testicle. It is often caused by fluid secreted from a remnant piece of peritoneum wrapped around the testicle. In congenital hydrocele testis, the hydrocele fluid may drain into the peritoneal cavity when the child is lying down and thus causing peritonitis. 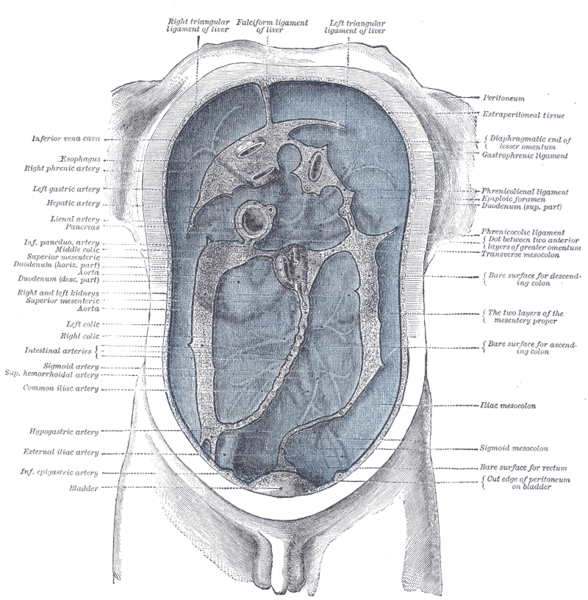 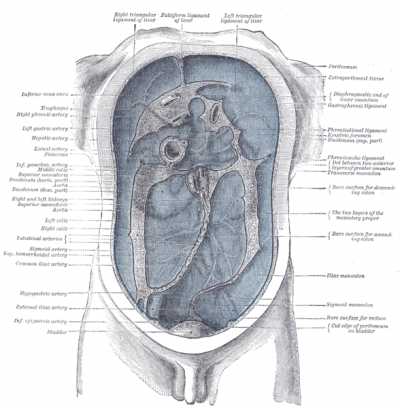 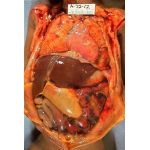 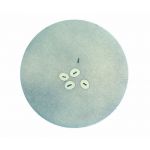 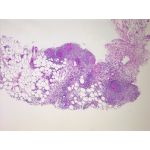