Premenstrual syndrome (PMS) refers to physical and emotional symptoms that occur in the one to two weeks before a woman's period. Symptoms often vary between women and resolve around the start of bleeding. Common symptoms include acne, tender breasts, bloating, feeling tired, irritability, and mood changes (Tab. 1). Often symptoms are present for around six days. A woman's pattern of symptoms may change over time. Symptoms do not occur during pregnancy or following menopause.

Diagnosis requires a consistent pattern of emotional and physical symptoms occurring after ovulation and before menstruation to a degree that interferes with normal life. Emotional symptoms must not be present during the initial part of the menstrual cycle. A daily list of symptoms over a few months may help in diagnosis. Other disorders that cause similar symptoms need to be excluded before a diagnosis is made.

The cause of PMS is unknown. Some symptoms may be worsened by a high-salt diet, alcohol, or caffeine. The underlying mechanism is believed to involve changes in hormone levels. Reducing salt, caffeine, and stress along with increasing exercise is typically all that is recommended in those with mild symptoms. Calcium and vitamin D supplementation may be useful in some. Anti-inflammatory drugs such as naproxen may help with physical symptoms. In those with more significant symptoms birth control pills or the diuretic spironolactone may be useful.

Premenstrual dysphoric disorder (PMDD) is a more severe form of PMS that has greater psychological symptoms. PMDD affects three to eight percent of pre-menopausal women. Antidepressant medication of the selective serotonin reuptake inhibitors class may be used in addition to usual measures for in PMDD.

Premenstrual syndrome is associated with several diseases including:

Anovulation is when the ovaries do not release an oocyte during a menstrual cycle. Therefore, ovulation does not take place. However, a woman who does not ovulate at each menstrual cycle is not necessarily going through menopause. Decreased symptoms of PMS or no PMS symptoms may be a symptom of anovulation.

Premenstrual dysphoric disorder is a more severe form of PMS that occurs in a smaller number of women and results in remarkable disability and loss of function. It has been shown that 2-6% of women experience the PMDD within their life span. Women with the PMDD complain of severe pain, breast tenderness, headaches, joint and muscle pain, bloating and weight gain as well as severe psychological symptoms such as sleep disturbance, limited concentration, irritability, anger, tension, marked depressed mood and mood liability. The symptoms interfere with their work, social activities, interpersonal relationships and quality of life.

Biological, genetic, psychological, environmental and social factors all seem to play a role in the onset of the symptoms. Research has shown that the risk of PMS in women whose mothers have had PMS is 70% compared with 37% in women whose mothers have not been affected. In addition, the rate of PMS in monozygotic twins is 93%, compared with that of dizygotic twins which is 44%. Further to these factors, it has been reported that past, present or current domestic violence can increase the risk of PMS in women who have experienced an abusive relationship. 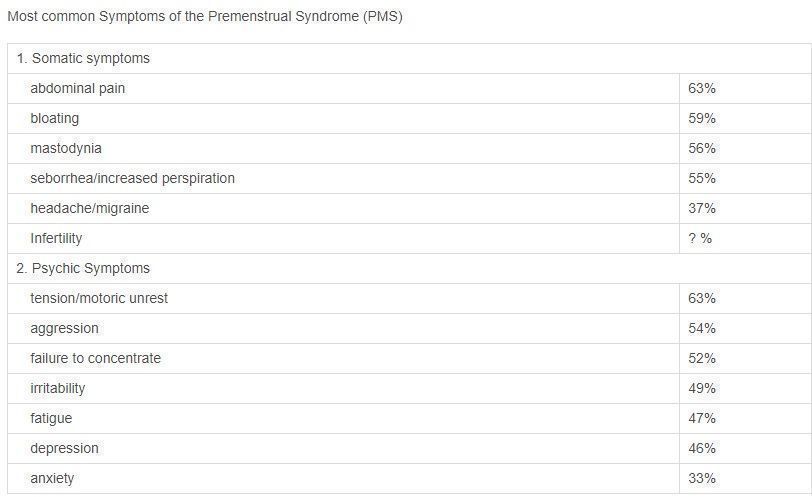 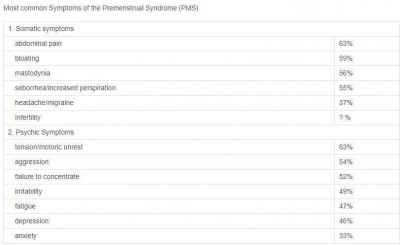