Pyrexia and redness of testicles

Increased temperature and redness of one or both testicles.

About Pyrexia and redness of testicles

Pyrexia, meaning increased temperature, and redness of testicles is a symptom that is characteristic mainly for two conditions – orchitis (inflammation of the testis), and testicular torsion. Their signs and symptoms can be very similar, including redness of the testicle, heat, pain and swelling. There may be also a swollen lymph node in the groin. Orchitis may be either of bacterial origin or a complication of active viral infection, most notably mumps.

Orchitis is an infection of the testicle. Orchitis can be related to epididymitis (an inflammation of epididymis) infection that has spread to the testicles, sometimes caused by the sexually transmitted diseases chlamydia and gonorrhea. Orchitis can also be seen during active mumps, particularly in adolescent boys. In the case of mumps, the orchitis is usually isolated, in contrast to orchitis of bacterial origin.

Testicular torsion is a common surgical emergency of adolescent males presenting with sudden onset of intense scrotal pain. Torsion is due to a mechanical twisting process, twisting the spermatic cord, resulting in loss of blood supply and eventual testicular necrosis. If prolonged, torsion results in infarction, but even those testes which are salvaged by surgery may undergo atrophy (loss of tissue). Human testes occasionally survive up to 10 hours of torsion; however, viability is considerably reduced after 4–6 hours of ischemia. In testicular torsion, mild pyrexia of the testicle and redness of overlying area may be found. The testis may be higher than its normal position. However, the most striking symptom of testicular torsion is the sudden onset of severe testicular pain. There is often associated nausea and vomiting.

Mumps is a viral disease caused by the mumps virus. Initial signs and symptoms often include fever, muscle pain, headache, and feeling tired. This is then usually followed by painful swelling of one or both parotid salivary glands. Symptoms typically occur 16 to 18 days after exposure and resolve after seven to ten days. Symptoms in adults are often more severe than in children. Mumps is highly contagious and spreads rapidly among people living in close quarters. The virus is transmitted by respiratory droplets or direct contact with an infected person. Only humans get and spread the disease. People are infectious to each other from about seven days before the start of symptoms to about eight days after. Once an infection has run its course, a person is typically immune for life. Reinfection is possible but the ensuing infection tends to be mild. Diagnosis is usually suspected due to parotid swelling and can be confirmed by isolating the virus on a swab of the parotid duct.

In post-pubertal males, the most common complication of mumps infection is orchitis (Pic. 1). Orchitis typically occurs about 10 days after the onset of parotitis, although it can be seen up to six weeks later. Orchitis is typically unilateral, but bilateral orchitis manifests in 15-30% of cases. Orchitis may be accompanied by epididymitis up to 85% of the time. Testicular swelling has been documented as late as six weeks after parotid gland swelling. Decreased fertility is an uncommon consequence of testicular inflammation from mumps and infertility is rare. 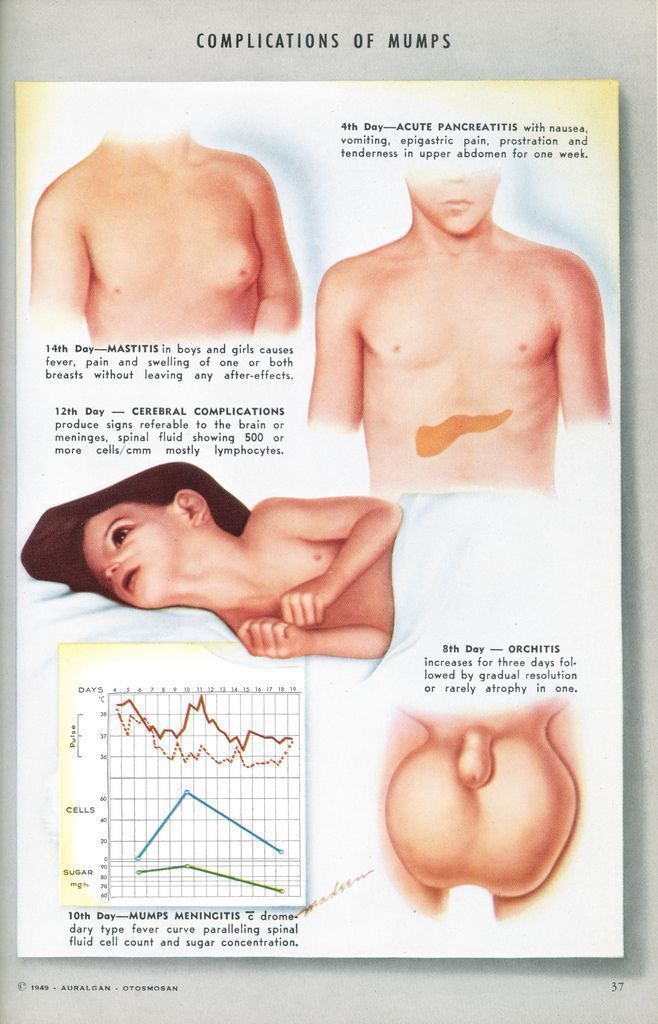 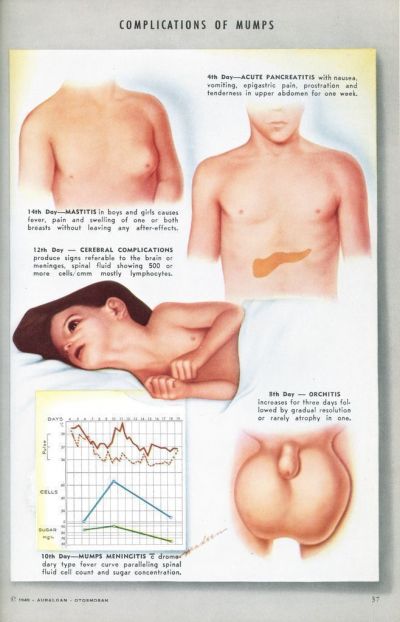