The reduction of sperm ability to move progressively is one of the commonest causes of male infertility (Pic. 1) and therefore, the assessment of sperm motility is included in routine semen analysis. If there is a certain percentage of immotile sperm found, then asthenozoospermia is diagnosed. Complete asthenozoospermia refers to the condition, when there cannot be found any motile sperm cells in a sample.

The sperm cell remains in a state of decreased metabolic activity until the ejaculation. After ejaculation the sperm cell is activated, as it has to be able to move progressively through female reproductive tract to reach fallopian tubes, where normally fertilization occurs. For this purpose, there’s a structure called as a flagellum which is a whip-like organelle allowing the sperm cell to move. The fertilization itself is united with a specific vigorous movement activity of sperm cell which allows the penetration of oocytes protective layers among other factors. This implicates the relevance between sperm motility and fertilizations capacity of a sperm cell.

The sperm motility can be classified into four grades:

Upon this classification, the normal sperm activity is diagnosed if more than 40 % of sperm cells demonstrate the motility of 1st and 2nd and 3rd grade (total sperm motility) plus there is more than 32 % sperm cells showing progressive motility (1st and 2nd grade). If these criteria are not met, then the diagnosis of asthenozoospermia is made.

The reduced sperm motility is connected with the presence of infectious diseases, varicocele, long period of sexual abstention, defective sperm cell mitochondria, and drug abuse including cigars or alcohol. Impaired motility may appear also as a result of congenital disorders such as Laurence-Moon-Biedl syndrome (a genetically predisposed disorder). It is also proven that metabolic syndrome may interfere with sperm cell motility, as well as, psychological stress.

The treatment of this symptom depends upon the identification of the cause. In case of inflammatory disease, it involves application of antibiotics. In case of high viscosity of semen, mucolytic substances are applied. If there is suspicion for mitochondrial deficiency it involves the application of vitamins, amino-acids and antioxidants. In case of varicocele it may involve surgical therapy.

Reduced sperm motility may be associated with several diseases including:

Chronic bacterial prostatitis (CPB) may serve as y typical example of inflammatory disease of male reproductive tract. Is caused by bacterial infection and maintains a condition of lower urinary tract infection. It may be a cause of male infertility. One of the main reasons is thought to be the increased production of ROS which are present in seminal plasma (the liquid part of semen). ROS reduce sperm cell membrane integrity and the sperm cell motility among other things.

Varicocele is an abnormal enlargement of the venous plexus in the scrotum. Varicocele is a common abnormality with the following andrological implications: failure of testicular growth and development, symptoms of pain and discomfort and male infertility. Among other factors, varicocele is connected with increased scrotal temperature and hypoxia (low oxygen supply). Both of these conditions are connected with increased ROS production and reduced antioxidant capacity leading to impaired sperm characteristics such as reduced motility.

Metabolic syndrome (MS) and closely related obesity are also connected with impaired characteristics of semen analysis. MS is a complex disorder, characterized by alterations in carbohydrate metabolism, obesity, arterial hypertension and dyslipidaemia (high concentrations of lipids within the blood). It is largely known that components of MS induce reproductive disorders through changes in hormone levels and production of pro-inflammatory substances (e.g. cytokines) which may cause reduced sperm motility.

Sperm motility is one of the most important factor in fertility of men. Because, it describes the ability of sperm to move properly through the female reproductive tract and reach the egg in order to fertilize it. Insufficient sperm motility is a common cause of subfertility or infertility.

There have been many reports that poor motility is associated with low IVF fertilization rates. For many years, the assessment of motility has been regarded as one of the most informative aspects of semen analysis.

Several scientific evidence of the improvement of sperm cells motility is available today for active ingredients (for example Coenzyme Q10), which play a fundamental role as substrata of energy metabolism in spermatozoa. Besides, the efficacy of treatment consisted of these ingredients in combination with vitamins C and E was also proved. 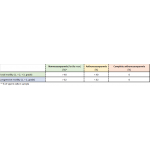