Testicular swelling is caused by accumulation of fluid in testicular area. The fluid can be blood, serum, or lympha.

Testicular swelling is often associated with inflammation in the area, fever and discoloration. Swelling causes great pain due to increased pressure on the nerves.

Swelling of one or both testes may be a result of testicular torsion, testicular cancer, orchitis, mumps and hydrocele testis.

Testicular torsion (Pic. 1) usually presents with an acute onset of diffuse testicular pain and tenderness of less than 6 hours of duration. There is often an absent or decreased cremasteric reflex (a drawing up of the scrotum and the testicle in response to scratching of theskin on the inner side of the thigh on the same side of the body), the testicle is elevated, and often is horizontal.

Some of the symptoms are similar to epididymitis (an inflammation of epididymis) though epididymitis may be characterized by discoloration and swelling of the testis, often with fever, while the cremasteric reflex is usually present. Testicular torsion, or more probably impending testicular infarction, can also produce a low-grade fever.

Testicular torsion is most frequent among adolescents (65% of cases presenting between 12 – 18 years of age ), and is rare after 35 years of age. Because it can lead to necrosis within a few hours, it is considered a surgical emergency. If the surgery is not prompt enough necrotic testicle has to be removed. In severe cases it happens on both sides. Without testicles producing sperms it is not possible to conceive a child.

Leydig cell tumour is a member of testicular cancers. It arises from Leydig cells.

Leydig cell tumors represent 3% of testicular masses and usually occur in prepubertal boys and men between 30 and 60 years of age. Leydig cell tumors are benign in children but can be malignant in 10% of adults.

While the tumour can occur at any age, it occurs most often in young adults. Additional signs include acne, voice deepening, temporal hair recession, and an increase in musculature. Serum testosterone level is high. In men testicular swelling is the most common presenting feature.

If the physicians detect a tumor, it is necessary to get rid of an abnormal tissue of testicle. Tumor could be removed surgically, or it could be destroyed chemotherapy or radiotherapy. When the cancer is not spread in both testicles, a man with one remaining testis may maintain fertility. Thus might be due to the fact that the tissue still can produce a healthy sperm. This sperm can be capable of insemination. A man who lost both testicles is infertile and sperm donation should be considered.

Orchitis is inflammation of the testes. It can also involve swelling, heavy pains and frequent infection, and is more rarely known as didymitis (as in epididymis).

Symptoms of orchitis are similar to those of testicular torsion. These can include hematospermia (blood in the semen), hematuria (blood in the urine), severe pain, visible swelling of a testicle or testicles and often the inguinal lymph nodes on the affected side.

Orchitis can be related to epididymitis infection that has spread to the testicles (then called "epididymo-orchitis"), sometimes caused by the sexually transmitted diseases chlamydia and gonorrhea.

Orchitis could cause azoospermia (the medical condition of a man whose semen contains no sperm), most likely due to testicular tissue necrosis. Necrosis appears to be the dominant cell death pathway in infected testis. Substantial necrotic changes seen in Sertoli cells contribute to impaired spermatogenesis by loss of function in supporting the dependent germ cells.

Azoospermia is associated with very low levels of fertility or even sterility, but many forms are amenable to medical treatment.

Mumps is a viral disease caused by the mumps virus. Initial signs and symptoms often include fever, muscle pain, headache, and feeling tired. This is then usually followed by painful swelling of one or both parotid salivary glands.

Complications may include infections of the covering of the brain , pancreatitis, permanent deafness, and painful testicular swelling which uncommonly results in infertility.

True infertility following mumps orchitis is rare but subfertility has been seen in up to 13% of patients. Subfertility can occur even without accompanying testicular atrophy (any reduction in testicular size). Testicular atrophy occurs in 30-50% of patients with orchitis. Abnormalities of spermatogenesis (development of sperms from germ cells) have been observed to occur in up to half of patients for up to three months after recovery from the acute illness.

A hydrocele testis is an accumulation of clear fluid in the tunica vaginalis, the most internal of membranes containing a testicle. A primary hydrocele causes a painless enlargement in the scrotum on the affected side and is thought to be due to the defective absorption of fluid secreted between the two layers of the tunica vaginalis (investing membrane). A secondary hydrocele is secondary to either inflammation or a tumor in the testis. 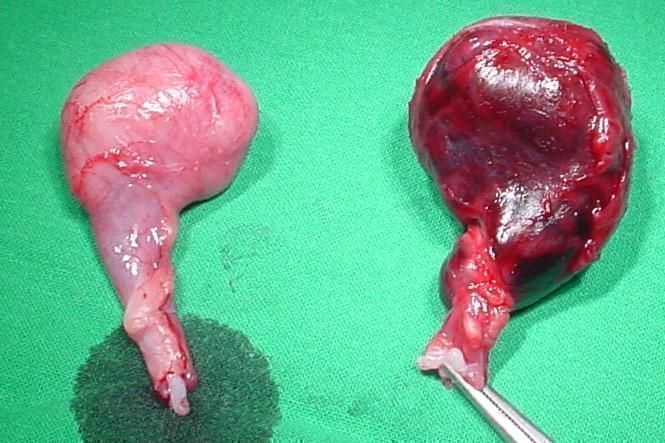 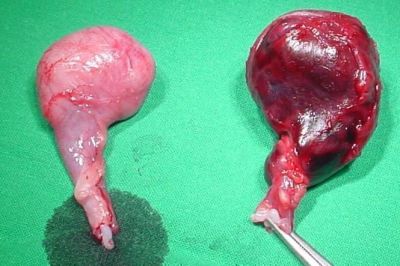