Vaginal bleeding is any bleeding through the vagina, including bleeding from the vaginal wall itself, as well as (and more commonly) bleeding from another location of the female reproductive system, often the uterus. Generally, it is either a healthy physiologic response during the non-conceptional menstrual cycle or is caused by hormonal or other organic problems of the reproductive system, such as abnormal uterine bleeding. Vaginal bleeding may occur at any age, but always needs investigation when encountered in children or in premenopausal women. Vaginal bleeding during pregnancy may indicate a possible pregnancy complication that needs to be medically addressed. Rarely, the blood may arise from the urinary tract (hematuria), although most women can identify the difference.

Another type of vaginal bleeding is connected to the coitus. Postcoital bleeding refers to spotting or bleeding that occurs after intercourse and is not related to menstruation (Pic. 1). Postcoital bleeding mainly comes from surface lesions of the genital tract to include cervical polyps, cervicitis, ectropion (a condition in which the central columnar epithelium protrudes out through the external os of the cervix and onto the vaginal portion of the cervix), cervical intra-epithelial lesion (CIN), or carcinoma .

Bleeding before the expected time of menarche could be a sign of precocious puberty. Other possible causes include the presence of a foreign body in the vagina, molestation, vaginal infection (vaginitis), and rarely, a tumor.

Most unusual bleeding or irregular bleeding in premenopausal women is caused by changes in the hormonal balance of the body. These changes are not pathological.
There are pathological causes of unusual vaginal bleeding as well such as uterine fibroid, endometrial polyps and endometrial, cervical or vaginal cancer.

Uterine fibroids are benign tumours of the smooth muscle of the uterus. Common complications of uterine fibroids include irregular bleeding with symptoms of anaemia. Submucosal fibroids may also present with intermenstrual bleeding. This is especially prevalent with prolapsed (a condition where organs, fall down or slip out of place) submucous fibroids. Any woman with fibroids and intermenstrual bleeding must, however, have a pelvic examination and pap smear to make sure an obvious cervical cancer is ruled out.

Endometrial polyps are localized, pedunculated or sessile tissue growths consisting of a variable amount of glands, stroma and blood vessels. They have a soft consistency, similar to the endometrium, and their surface is dark and shiny. Sometimes they ulcerate which can cause vaginal bleeding.

Cervical or vaginal cancer can cause vaginal bleeding due to disruption of vessel in cervix by the ingrowth of tumor mass into them. This will break the wall of the vessel and blood than leak to the vagina. 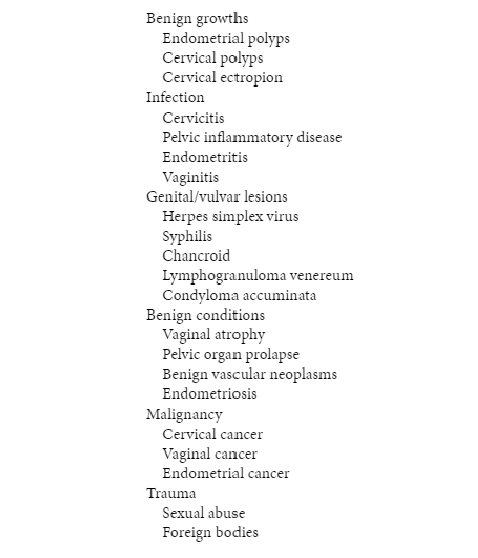 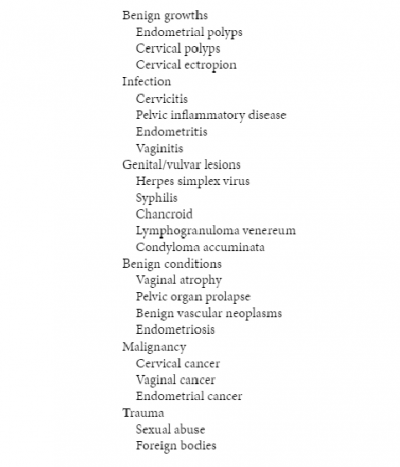