The range of medical treatments methods designed to result in pregnancy.

Men who ejaculate no sperm, because of blocked tubes in their testes, or because of a genetic condition that prevents their sperm being released, require some form of surgical sperm retrieval to enable ICSI to take place. Epididymal sperm obtained by microsurgical aspiration (MESA) or percutaneous sperm aspiration (PESA) and testicular sperm obtained by surgical excision (TESE) or percutaneous aspiration (TESA) are used in ICSI treatment. Alternatively, the retrieved sperm can be cryopreserved for use in future sperm injection attempts. If all efforts to extract vital sperm cells fails, then donated ones may be recommended.

Among women with older reproductive age, with history of repetitive abortions or genetic disorders, genetic analysis is highly recommended. The PGS/PGD allows studying the DNA of eggs or embryos to select those that carry certain damaging characteristics. It is useful when there are previous chromosomal or genetic disorders in the family, within the context of in vitro fertilization programs.

Morphological assessment of embryo appearance at the proper, distinct time points during development is a routine procedure in embryo selection. Moreover, time-lapse technology improvements has been evaluated as an aid to identify the embryo(s) with the highest implantation potential that enable to objectively select the embryo(s) for transfer. Time-lapse embryo monitoring allows continuous, non-invasive embryo observation without the need to remove the embryo from optimal culturing conditions.

In a natural cycle the embryo transfer takes place in the luteal phase at a time where the lining is appropriately undeveloped in relation to the status of the present Luteinizing Hormone. In a stimulated or a cycle where a "frozen" embryo is transferred, the recipient woman could be given first estrogen preparations (about 2 weeks), then a combination of oestrogen and progesterone so that the lining becomes receptive for the embryo.

Prior to the implantation, the embryo has to escape from the ZP (Zona pellucida), a process known as hatching at the blastocyst. Some embryo implantation problems in patients with recurrent implantation failure may be explained by the inability of the embryo to hatch out of its zona pellucida. In such cases, zona pellucida can be thinned in one part using the laser technique (LAZT - laser-assisted zona thinning) to improve the pregnancy and implantation rate. Media supporting implantation may also improve implantation process. The environment created for the embryos by the cytokine contained in the medium culture "in vitro" very closely resembles the “in vivo” environment (in natural conditions) and thereby improvements their ability to implant and keep itself in mucous membrane, and grow further.

A woman who has already had a live birth is more likely to have a successful ART procedure than a woman who hasn't given birth before. This history of "previous birth” is counted as an advantage that gradually narrows as women age advances. Many infertile women also believe that emotional distress (for example, tension or worry) is a contributing factor to their lack of natural fertility and lack of success with fertility treatment.
Age of the women and smoking habits of pregnant woman under treatment are found to be linked with the success of the procedure. Delayed childbearing has resulted in an increase in the number of women having children later in life. Thus more women face the problem of age-related infertility and cannot achieve their desired number of children. Childbearing postponement is one of the main reasons for the increasing use of assisted reproductive technology (ART).

Assisted reproduction techniques are associated with obstetric and neonatal risks as well, such as: maternal age, previous sterility and an unfavorable obstetrical past. Such risk factors can be aggravated according to the number of fetuses, increasing significantly with the gestation of three or more fetuses. Multiple pregnancy is the most frequent and serious iatrogenic complication of the assisted reproduction techniques.
In cases of preterm delivery, preeclampsia or early detachment of the placenta, the neonatal morbidity rate is higher in the short and long terms. Low birth weight and preterm birth are strongly associated with many health problems, such as visual impairment and cerebral palsy, and children born after IVF are roughly twice as likely to have cerebral palsy.
ART also increases the risk of adverse maternal complications such as GDM (Gestational Diabetes Mellitus), PE (Pulmonary embolism) and ICP (Increased Intracranial Pressure). The exogenous sex hormones, GnRH-a (Gonadotropin-releasing hormone agonist) and Gn (Gonadotropin) may affect the sex hormones secretion through hypothalamic-pituitary-gonadal axis and other mechanisms. So the hormone-related complications like GDM, PE and ICP may occur.
Many studies have reported that the incidence of pregnancy complications including GDM, PE, ICP, placenta previa and preterm labor in infertility patients who get ART treatment is higher than pregnant women with natural conception.

ART is currently a commonplace technology that has successfully treated millions of infertile couples the world over. According to the results of a study published in the New England Journal of Medicine recently, live birth rates from ART can approach those of natural fecundity in the general population, as long as the couple and embryo criteria are favorable and there are no contraindications for treatment continuation. However, financial limitations, environmental stresses and repeated implantation failures in the first two or three cycles or implication of other factors reduce live birth rates from ART dramatically.

The long-term evaluation of the offspring of couples who underwent ART compared to offspring conceived naturally, do not show an increase of congenital anomalies and physical growth is similar, as well as the rate of cerebral palsy, however mild neurological disorders are higher in the ART group. 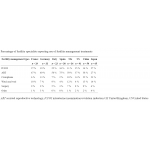 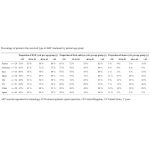