Type of embryo transfer where embryos are transferred at blastocyst-stage (day 5-6 of culture).

The logic behind extending embryo culture until the day 5 is not to improve its quality, but to increase the probability of choosing the embryo with better developmental and implantation potential and to increase the pregnancy rate with minimizing the risk of multiple gestation. When embryos reach the blastocyst stage it means they survive the 4-to-8-cell stage, in which development fails most commonly. Since cultivation time is longer compare to cleavage-stage embryos (day 2 to 3), blastocyst stage is reached only by smaller amount of embryos. Thus, there are embryos that don´t develop into blastocyst stage under lab conditions although they would be able to form that in natural pregnancy conditions.

It was suggested that transferring embryos at the blastocyst stage might be the most biologically correct stage for embryos in the uterus, because embryos in earlier stages are naturally in the fallopian tube, and the longer culture in the laboratory may give the embryologist greater ability to select the best quality embryos for transfer. Recent studies don´t agree with that. Since the implantation is most likely in endometrium receptivity stage (implantation window), the tests for receptivity stage evaluating is used. The most often used type is ERA test (endometrium receptivity test). It is reported that transferred blastocyst is able to survive and implant only at receptivity stage compare to cleavage-stage embryo that is able to implant even in prereceptive stage (before implantation window) thereby that younger embryo can „wait“ for 2-3 days until the receptivity stage.

Blastocyst culture has been associated with higher clinical pregnancy and live birth rates per a transfer. Cumulative pregnancy rate is lower than in cleavage-stage transferred embryos as a result of smaller amount of blastocysts compare to cleavage-stage embryos. Thus, the likelihood of successful pregnancy is decreased in blastocyst transfer.

Prolonged cultivation of embryos is enabled due to progress in cultivation media. When culturing to the blastocyst stage, sequential or single system are used. In sequential system, the embryo is sequentially placed in different media. One medium may be used for culture to day 3, and a second medium is used for culture thereafter. Single or sequential medium are equally effective for the culture of human embryos to the blastocyst stage.

First, an early blastocyst is formed (Pic. 1), with a small cavity, which grows to form a full blastocyst. From this stage, the number of cells is categorized in the trophoblast and inner cell mass. Expansion begins and finally hatching (Pic. 2) through the zona pellucida (layer surrounding the plasma membrane of mammalian oocytes). This classification (Pic. 3) allows selecting blastocysts for transfer that have higher growth potential. The logic behind extending embryo culture until the fifth day is not to improve its quality, but to increase the probability of choosing the embryo with better implantation potential.

It is important to have an embryo screening method that allows transferring the minimum number of embryos without affecting the chance of pregnancy. The most often used type of monitoring is time-lapse monitoring that allows detection of numerous developmental embryo anomalies. The development of media by which the embryos grow for longer periods, up to the blastocyst stage allows selecting the best embryos to be transferred. Thus, it has increased implantation rates and reduced multiple gestations.

However, blastocysts have certain drawbacks. With current techniques, some cleavage embryos do not develop into blastocysts in vitro and some blastocysts cannot be well cryopreserved (preservation by freezing). Thus, the possibility to undergo cryopreservation is decreased. Therefore, it is still questionable whether the transfer of blastocyst-stage embryos is beneficial to all infertile patients.

Extending the duration of embryo culture to the blastocyst stage for assisted reproductive techniques (ART) offers several theoretical advantages over the transfer of cleavage-stage embryos.

The blastocyst culture may increase the likelihood of selectively transferring viable and genetically normal embryos. Although the development to the blastocyst stage is not a guarantee of chromosomal normality and blastocysts may represent genetically abnormal embryos as well , most embryos that fail to continue to develop in extended culture show multiple aneuploidies.

There are several potential risks of blastocyst transfer. The lack of accepted criteria for predicting blastocyst development increases the risk that the embryos of some patients could not reach that stage and consequently the cancellation of transfer will deprive them from a chance of pregnancy. Another risk is that the embryo freezing rate could be reduced in the absence of good quality blastocysts.

The number of embryos frozen is an important factor to evaluate the effectiveness of a treatment, because it offers an additional opportunity for patients to achieve pregnancy. Assessing the embryo quality at different stages could help determine the embryos with the best potential for implantation. On average only 50% of cultured embryos reach the blastocyst stage.

Although single blastocyst is transferred, there is still a risk of twin pregnancy. Transferred blastocysts may have a tendency to split to form monozygotic (identical) twins. The exact background of the risk is not known, but alteration in the zona pellucida induced by extended culture is thought to be responsible. There is also an increased proportion of large for gestational age. It is suggested that there is a decreased risk of intrauterine growth retardation with blastocyst stage embryo transfer compared with those at cleavage stage. The reason could be the type of culture media used in extended culture.

Additionally, there is significantly higher likelihood of preterm birth after blastocyst transfer compared to cleavage stage transfer. In order to explain the above it is suggested that longer in vitro culture might have a deleterious effect on subsequent formation of placenta (placentation).

Epigenetic abnormalities (heritable changes in gene function that do not involve changes in the DNA) in embryos having undergone embryo culture has been also detected, especially in prolonged culture.

Often, an additional incubator is required due to additional 2-3 days during which the embryos remain in culture. Blastocyst culture is much labour intensive, and laboratory staff may be required to perform more weekend work, particularly if the embryos from two different stages of development are required to be cryopreserved.

The blastocyst culture may increase the likelihood of selectively transferring viable and genetically normal embryos, i.e. embryos with higher implantation potential. Although the development to the blastocyst stage is not a guarantee of chromosomal normality, most embryos that fail to continue to develop in extended culture show multiple aneuploidies (presence of an abnormal number of chromosomes in a cell). Embryo culture until the blastocyst stage confers a significant increase in live birth rate per embryo transfer.

The feasibility of culturing the human embryo to a viable blastocyst, using appropriate sequential media, allows for the identification of those embryos with a higher developmental potential. Furthermore, to perform embryo transfer at the blastocyst stage has additional advantages such as better synchronization between embryo developmental stage and uterine environment, and decreased uterine contractility, resulting in a higher implantation rate without affecting pregnancy rate. The high implantation rates could allow fewer-transferring but higher-quality embryos at the blastocyst stage, thus avoiding the risk of multiple pregnancies.

Usage of low oxygen concentrations of 5% rather than about 20% in the atmosphere has been shown to increase live birth rate to a relative probability of 1.24, without any evidence of increased risk for multiple pregnancies, miscarriages or congenital abnormalities. 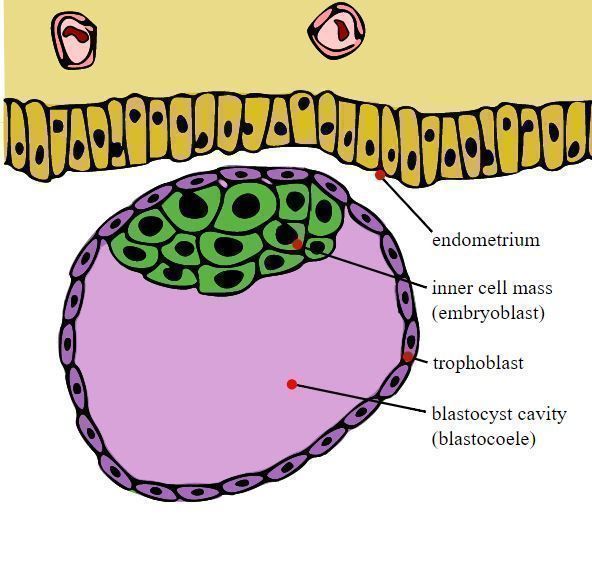 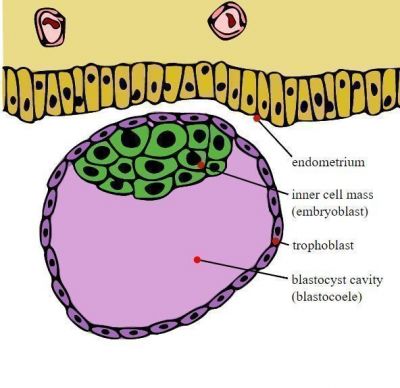 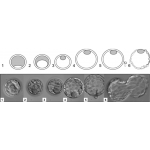 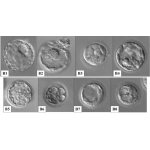