food intake in Anorexia nervosa, AN

A treatment by food, including nutritional restoration and weight normalization.

About Diet therapy of Anorexia nervosa

Anorexia nervosa (AN) is a complex and frequently intractable illness of unknown etiology that is often chronic and disabling. It is characterized by aberrant feeding behaviors, an extreme pursuit of thinness and emaciation, and body image distortions. Onset tends to occur during adolescence.

AN is often associated with denial of illness and resistance to treatment. Consequently it is difficult to engage individuals with AN in treatment, including nutritional restoration, and weight normalization. The continuous restrictive eating and malnutrition result in pervasive disturbances of most organ systems including cardiovascular and gastrointestinal complications, endocrine disorders (i.e. osteopenia (bone weakening) and amenorrhea), and other metabolic alterations.

It is well known that patients with AN, compared to healthy controls, tend to eat significantly fewer calories by restricting caloric intake and avoiding calorie dense foods. Individuals with AN show many unusual eating behaviors like slow and irregular eating, vegetarianism, and choosing a narrow range of foods.

Without weight restoration, patients may face serious or even fatal medical complications of severe starvation. However, the process of nutritional rehabilitation can also be risky to the patient. The refeeding syndrome, a problem of electrolyte and fluid shifts, can cause permanent disability or even death. It is essential to identify at-risk patients, to monitor them carefully, and to initiate a nutritional rehabilitation program that aims to avoid the refeeding syndrome. A judicious, slow initiation of caloric intake, requires daily management to respond to entities such as liver inflammation and hypoglycemia that can complicate the body's conversion from a catabolic to an anabolic state.

Administration of nutrients (Tab. 1) should be done slowly, starting with no more than 500 kcal/day in the form of a complete liquid diet for several days, then gradually increasing the caloric load in a step-wise mater. People at high risk are those with BMI < 12, those who vomit, abuse laxatives and binge and those with physical comorbidity. In such severe cases, strict monitoring is required, and it may take a month or more to restore body weight, not necessarily to normal weight, but to an acceptable level (usually a 10% gain in weight) that can be followed by oral feeding on an outpatient basis.

Caloric requirements in AN patients are high and vary between 30–40 kcal/kg/day (up to 70–100 kcal/kg/day) for inpatients, and 20 kcal/kg/day for outpatients; after the first phase of treatment it is possible to achieve a weight gain of 1–1.5 kg/week in the inpatient setting and of 0.5 kg/week in the outpatient setting. Also, for maintenance, AN patients need higher caloric amounts - around 50–60 kcal/kg/day - than the general population. This increased caloric requirement may be due both to exercise – often a hallmark of this illness - and metabolism.

It has been suggested that the AN patient should be eating calorie dense food to replenish the necessary nutrients. Daily intake of foods containing protein of high biological value, such as whey and casein, and egg whites, that contain a high concentration of essential amino acids per gram and calorie density, should be recommended. Consuming small amounts of protein of high biological value, in conjunction with the protein source foods that are perceived as less challenging by AN patients (usually of a vegetable source), can help assure a faster restoration of nutrient status even in a continued state of reduced body weight. Additionally, a variety of protein food sources including fleshy fish and poultry should be encouraged.

Recommended Daily Allowances (RDA’s) for vitamins and minerals vary by age and gender, but can be met by intake of a multivitamin/multimineral tablet or liquid. Placing the emphasis on nutrient requirements, achieved through food intake, as opposed to caloric intake, may help to lessen the anxiety and resistance to refeeding observed in AN patients.

Nutrition restoration is a core element in treatment because of the need to restore weight in order to avoid severe physical complications and to improve cognitive function to make psychological interventions useful and effective.

Weight loss or anorexia can also cause hormonal imbalance. Sex hormones are affected in both male and female patients with anorexia nervosa. These patients have low levels of hypothalamic gonadotropin releasing hormone (GnRH) and low levels of pituitary luteinizing (LH) and follicle stimulating hormone (FSH), estrogen and testosterone. These abnormalities affect potency, fertility. It is possible that this mechanism evolved to protect the mother’s health. A pregnancy where the mother is weak could pose a risk to the baby’s and mother’s health.

In contrast to the occurrence of amenorrhea in females, males have changes in sexual functioning, including a decrease in sexual drive. With decreasing weight is also reduced testosterone levels.

Given the lack of clear correlation between features of anorexia nervosa and subsequent pregnancy complications, there is no clear treatment or preventative measure for this issue, other than treatment of the underlying eating disorder and nutritional deficiencies.

Individuals with AN often drop out from treatment programs and relapse because of continued harmful eating behaviors.

It has been shown that patients with AN who were previously obese can gain weight more rapidly than those patients without any history of obesity. This suggests that differences in metabolic rates may play a key role in the outcome of weight-gain effort

There is emerging evidence that patients with AN have alterations in neural mechanisms that would normally activate the drive for food consumption when starved or hungry.

Low energy dense food and limited variety are associate with poor outcome. The individuals with AN have tend to revert to pathological eating and to the low calorie intake. It has been recently shown that high dietary energy density scores are more predictive of better outcomes than total caloric intake.

It is imperative to acknowledge small successes and provide encouragement for these patients. Along with encouragement and education regarding meal plans and general nutrition, doctor can help the patient achieve goals to incorporate nutrition practices to return to a normal healthy lifestyle.

Personality traits such as affective disorders or perfectionism may failure influence response to treatment and treatment resistance.

Psychological factors that can contribute to eating disorders include low self-esteem, feelings of inadequacy or lack of control in life, depression, anxiety, anger, or loneliness and non-acceptance of the disease. Nutritional restoration can increased amounts of food also increase anxiety and resistance. They have difficulty eating because it generates a profound sense of anxiety, instead of pleasure or reward.

The fashion industry and the media promote an unhealthy standard of beauty that emphasizes thinness over health. This exerts social pressure to attain this "ideal" body image.

Long periods of malnutrition cause physical changes in the muscles, the integrity of the gut wall and digestive enzyme systems of the gut, as well as compensatory metabolic changes in the body to deal with being malnourished. As a result, increases in caloric intake can cause gut distress because the body requires time to adapt to the processing of the increased food intake.

One important side effect to be considered at the beginning of nutritional therapy - even if it is rare - is refeeding syndrome caused by rapid refeeding of someone in a state of starvation, usually chronic. It is well known that starvation to the level of 50% reduction in the normal body weight is associated with higher fatality rate. Under these conditions, restoration of nutrit ion must be done slowly in order to avoid refeeding syndrome. This syndrome is biochemically characterized by hypophosphatemia, hypomagnesemia, hypokalemia (low level of phosphate, magnesium, potassium in the blood), glucose intolerance (high glucose levels in blood), fluid overload, and thiamine (vitamin B1) deficiency.

Clinical consequences can be:

To avoid refeeding syndrome, levels of phosphorus, magnesium, potassium and calcium should be determined for the first 5 days and every other day for several weeks. If indicated, during the first days of refeeding, large amounts of multi-vitamins and minerals, in particular potassium, thiamine, phosphate and magnesium, should be provided.

Rapid increase in calories may result in dangerous conditions in some patients, therefore careful medical monitoring during the weight restoration process is required.

A well-balanced and nutritional oral diet plan is generally the optimal approach for refeeding these malnourished patients, but also have a limited role.

Not all people with anorexia recover completely: about 20% develop anorexia nervosa as a chronic disorder. If anorexia nervosa is not treated, serious complications such as heart conditions and kidney failure can arise and eventually lead to death. The average number of years from onset to remission of AN is seven for women and three for men. After ten to fifteen years, 70% of people no longer meet the diagnostic criteria, but many still continue to have eating-related problems.

Even when a person is classified as having a "good" outcome, weight only has to be within 15% of average, and normal menstruation must be present in females. The good outcome also excludes psychological health. Recovery for people with anorexia nervosa is undeniably positive, but recovery does not mean a return to normal.

One of the major problems with anorexia and bearing children is that most women would prefer to receive a treatment for fertility than for their eating disorder. Even if they are fully recovered they are still at high risk of getting miscarriages and caesarean sections. However, women with a history of anorexia are more likely to have future problems with fertility, and are more likely to have persistent amenorrhea regardless of weight restoration, as compared to the general population. Women with a history of anorexia nervosa who do become pregnant are at greater risk for pregnancy complications such as hyperemesis gravidum (condition characterized by severe nausea, vomiting and weight loss), and spontaneous abortion, as well as adverse neonatal outcomes such as low birth weight. 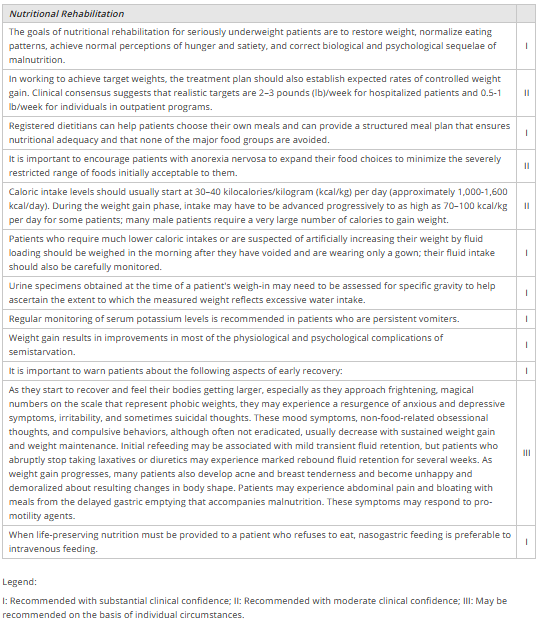 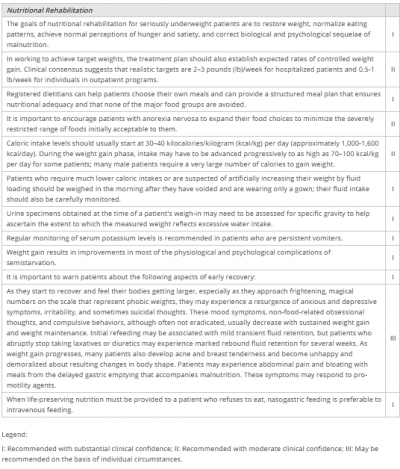