Oocyte cryopreservation is laboratory technique used to long-term storage of female gametes in liquid nitrogen for later use in assisted reproduction procedures. Thanks to oocyte freezing some medical and nonmedical fertility related issues can be solved. The cryopreservation means that extremely low temperature (-196°C) is used to preserve a female gamete. To gain and maintain such low temperature, liquid nitrogen is used. An oocyte exposed to liquid nitrogen stops its biological activity (this is called as the abiosis) and becomes an inert structure. Cryopreservation is carried out by two techniques; the former slow freezing method, and the more recent procedure called vitrification. These two methods differentiate by the cooling rate. There are three main goals of successful oocyte cryopreservation: avoidance of ice crystal formation, avoidance of solution effect, and avoidance of osmotic shock. The solution effect is a phenomenon developing while water transforms to a solid state. During the formation of ice, the solutes dissolved in water are excluded from ice, which can lead to very high, even toxic levels, of non-liquid solutes and electrolytes. Too high intracellular levels of solutes can cause protein damage. Osmotic shock can occur because of very fast state shifting of water and subsequent excessive changes of osmotic conditions. The oocyte accommodates to such alterations of osmotic pressure by shrinking or swelling (Pic. 1 and Pic. 2). In case of too excessive accommodations of an oocyte to osmotic pressure, the destruction of oocyte itself can happen. To prevent the damage of an oocyte done during freezing process, protective substances called cryoprotectants must be used.

Slow-freezing is the procedure most widely used for cryopreservation. The majority of assisted reproduction laboratories are using slow-cooling methods for human oocyte. Straws are used as typical oocyte carrier.

Before the cooling process can start, oocytes are exposed to a mixture of cryoprotectants for about 10 minutes in a dehydration process. After that an oocyte is ready to undergo the cooling process. In case of slow freezing there is quiet long period of slow temperature decrease. The cooling rate is about 0,3°C – 0,5°C per minute and it is maintained until the temperature reaches approximately minus 30°C - 40°C. At this point the cooling rate is increased to minus 50°C per minute until the temperature reaches -80°C – 150°C. Subsequently the oocytes are plunged into a liquid nitrogen held in special dose called a Dewar vessel (Pic. 3). The Dewar vessel is capable of maintaining a near constant temperature for the frozen oocytes during storage. During slow cooling, the dehydration process induced by cryoprotectants is thought to continue until minus 30°C. Because of relatively long period of the dehydratation process referred also as equilibrium period, when the exchange of fluids between the extra and intra cellular spaces takes places, the slow freezing method is also known as the equilibrium freezing.

There are some limitations of slow freezing method. First, this method is expensive and requires programmable freezing equipment to ensure exact specific conditions during cryopreservation and the reproducibility. This poses a substantial cost to many centres. Additionally, this method is quiet time-consuming, taking embryologists at least 90 minutes to successfully cryopreserve oocytes. Despite these drawbacks, this technique is still the most widely used and has the most literature available about tested protocols and outcomes.

Vitrification, is an alternative method to slow freezing cryopreservation. This technique uses high concentrations of cryoprotectants and a rapid cooling rate (up to 20,000°C/minute) to convert liquid intracellular water directly into a glassy, vitrified state. Great advantage of vitrification is that it avoids the formation of ice crystals in the intracellular and extracellular space. In contrast to slow freezing, cells are dehydrated mainly before the start of the ultrarapid cooling by exposure to high concentrations of cryoprotectants. This is necessary to obtain a vitrified intracellular and extracellular state afterwards. Because of very short period of equilibrium, vitrification is also called as non-equilibrium freezing. In order to further increase the cooling rate (>10.000°C/min), the volume of the solution, in which the oocytes are vitrified, has been dramatically decreased (0.1–2 μL). To hold the oocyte covered with very small amount of vitrifying solution, special carrier systems have been developed. They can be basically divided into open and closed systems. The advantage of open systems (such as open pulled straws, cryotop, electron microscopy copper grids, cryoloops and others) is that they can cool down at higher rate then closed systems. On the other hand, the advantage of closed system is the inhibition of the possible viral transmission between nitrogen and the sample. So it can be said that closed systems have been developed for safety reasons. Technically vitrification is very difficult to perform, because of the very concentrated, viscous, and small volume of vitrification solutions in which the oocytes must be handled for only a very limited amount of time (<1 min) before and during vitrification. This indicates the necessity of very well trained embryologist to achieve optimal work results. Even though vitrification does not require expensive embryology lab equipment, the cost of freezing and thawing media is considerable. Main advantage of vitrification is the fact that it takes less time to perform. However other potentially favourable aspects of vitrification are being tested intensively and the vitrification yet may prove superior to the former slow freezing method.

In case of slow freezing the most common cryoprotectants are propylene glycol and sucrose. The freezing solutions that are commonly used for vitrification are composed of ethylene glycol, glycerol, dimethyl sulfoxide, propylene glycol, acetamide, sucrose and trehalose. Since there are no common protocols for vitrification and this technique is still under development, cryoprotectants used within this method vary much more, then in case of slow freezing method with well-established protocols. For example, some protocols of vitrification supplement their freezing mediums also with macromolecular substances such as polyethylene glycol, ficoll and others.

Oocyte freezing is a now widely used technique of assisted reproduction which helps to solve specific women’s infertility related issues. Cryopreservation of oocytes has been recognized as an efficient procedure for management of female fertility, following list shows typical examples of such cases, when the oocyte freezing should be considered:

Without any doubts, cancer treatment (usually including radio/chemotherapy) has negative influence on patient’s fertility and, if possible, oocyte cryopreservation should be considered. In case of young and childhood patients it would be usually related with the loss of the possibility to conceive at adult age since the ovarian tissue and reproductive cells suffer from excessive damage done by the cancer treatment. To preserve the fertility of female cancer patients, the oocyte freezing is a reasonable option. Even in those cases, when the cancer treatment cannot be delayed for ovarian stimulation (which normally precedes the oocyte banking), there is a possibility to collect immature oocytes. These oocytes can mature under laboratory conditions and can be also stored for later use. Cancer treatment can be also related with some anatomical abnormalities. As an example of anatomical abnormality as a result of cancer therapy can serve the removal of uterus, called hysterectomy, done to treat the uterine or cervical carcinoma. In such case the patient that has undergone hysterectomy may retain the capability to produce healthy oocytes, but for obvious reasons can’t bear a child. Cryopreserved oocytes of such patient can be later artificially fertilized with partner’s sperm and the resulting embryo is then transferred into the gestational carrier’s uterus in a synchronized menstrual cycle. Gestational carrier has been also shown to be an effective treatment for several others medical conditions such as patients with Mayer- Rokitansky-Kuster-Hauser syndrome and others.

Except above mentioned premature ovarian failure due to cancer treatment, it may also occur in women with genetic abnormalities (such as Turner's syndrome), in severe or recurrent ovarian disease (such as cysts or endometriomas), or after removal of the ovaries to treat endometriosis or ovarian pain. For women at risk of premature ovarian failure, oocyte freezing is a viable possibility for preserving their fertility.

It is obvious and well documented that due to demographic changes of reproductive-age women, many of them are delaying childbearing to pursuit career advance which leads to increased age of maternity. The relation between the quality of an oocyte and woman’s age is quiet well documented. Conceiving a child too late may have negative influence on the health of the child and may also be risky for the mother. Generally, the limiting age to conceive a child for a woman without increased risk of any complications is considered to be 30 years. Delayed childbearing is related to lowered fertilization chances and higher possibility of miscarriage or complicated pregnancy. It can also influence negatively the biological relationship between mother and fetus which can be the reason of development of predispositions to sever diseases such as diabetes. The oocyte cryopreservation may represent a viable solution to the dilemma of young women choosing between child bearing and a career advancement.

In the end it is also worth mentioning oocyte donation programme. Healthy donators can donate their oocytes to a clinic of assisted reproduction. These cryopreserved oocytes can be later used to help infertile female patients with healthy uterus to bear a child. Women with premature ovarian failure, women of post-reproductive age and patient with recurrent failure of IVF treatment may also give birth thanks to donated oocytes fertilized in vitro conditions and transferred to their uterus.

On the opposite, cryopreservation may introduce an extra safety measure with regard to quarantine for infectious disease. By freezing donated oocytes, additional infectious disease testing can be done months after oocyte retrieval to ensure optimal embryo transfer and pregnancy outcome.

Regarding to the influence of cryopreservation and the damage done by the process of freezing to oocytes, it is worth mentioning several basic aspects upon which an attention is being focused.

First, there is the meiotic spindle which is an important dynamic structure that forms during mitosis and meiosis to facilitate chromosomal segregation. Disruption of the meiotic spindle increases the risk of aneuploidy (a genome disorder characterised by unnatural counts of chromosomes in a cell caused by failure during cell division). It appears that cryopreserved oocytes are capable of reforming the meiotic spindle with normal function after thawing. Though spindles disappear in oocytes during the thawing process, surviving post-thaw oocytes are noted to have intact, functional meiotic spindles.

Another important aspect of oocyte freezing is the hardening of the zona pellucida (the transparent glycoprotein envelope that surrounds a mature mammalian oocyte). It is thought to occur due to premature cortical granule release during cryopreservation. This early hardening of the zona pellucida impedes penetration and fertilization by sperm. The ICSI (intracytoplasmic sperm injection) technique bypasses this problem by direct injection of sperm into the oocyte. Additionally, vitrification of oocytes in calcium-free media appears to reduce zona pellucida hardening and leads to increased fertilization rate. 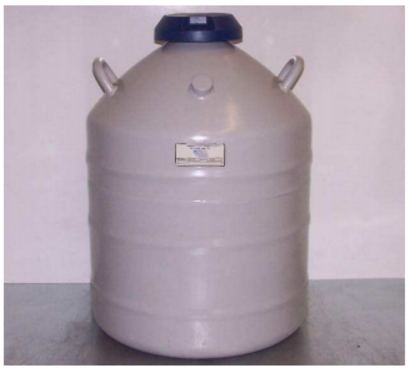 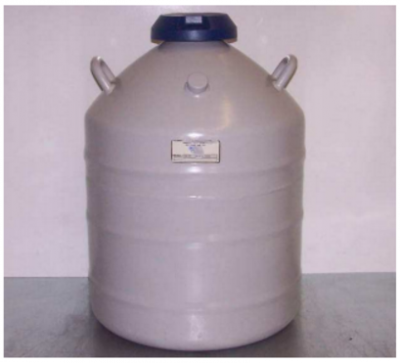 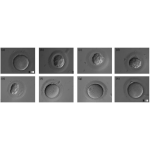 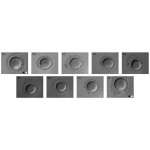