Given that the transfer of multiple embryos increases the risk of a multiple gestation, many have suggested a move towards elective single embryo transfer (eSET), although this recommendation has been focused mainly on women less than age 36. In a fresh IVF cycle, single-embryo transfer (SET) is associated with a lower rate of multiple pregnancies than other principles of embryo transfer. For this reason, SET became more popular in the past decade and had a good perinatal outcome in the US, in the Nordic countries, and even in Asia in recent years. Several randomized controlled trials in Europe have demonstrated that eSET significantly diminishes twin gestations and yields comparable live birth rates in good prognosis patients (Graph 1).

A handful of European studies have also addressed the role of eSET in the advanced maternal age population. One study found that eSET could be safely applied to patients aged 36–39, while dramatically decreasing the multiple gestation rate (MGR) and achieving similar pregnancy rates (PRs). Another study found that eSET could be offered to women younger than 38 in the first three IVF treatment cycles without compromising PR, although the mean patient age in this study was 32.5 years.

Selection of the best embryo for transfer is crucial for the eSET. During the past 15 years, various approaches were suggested, including morphological classification, proteomic and metabolomic investigations and time lapse follow-up. The increasing incidence of aneuploidy with advanced maternal age requires a reliable diagnostic method for chromosome aneuploidies, and recent reports indicate that none of the non-invasive approaches are reliable enough for this purpose. Therefore, embryo biopsy, preferably at the blastocyst stage and accompanied by comprehensive chromosome screening may be advised in some patients with higher risk of aneuploidy.

Women who are indicated as proper candidate (age under 36, first assisted reproductive cycle, previous successful pregnancy by assisted reproduction, sufficiency of high-quality embryos and enough embryos for cryopreservation) have high potential of successful transfer (about 48%). If it is not fulfilled one of the reccomendations above, potential decreases. There is also risk of failure. It can be selected under-quality embryo with potential abnormalities.
On the other hand, eSET is the only option how to minimalize multiple pregnancies.

Although the optimal outcome of assisted reproductive technology (ART) is a healthy singleton pregnancy, the rate of twin gestation from ART in women over the age of 35 is persistently high. By eSET there is still some risk of twin pregnancy, about 2-3%. Twin gestations carry increased risk of adverse outcomes, such as prematurity, low birth weight, infant mortality, and maternal mortality. Twin gestations also compound the health threats to women of advanced maternal age, who are already at increased risk of developing complications such as gestational diabetes and preeclampsia. For example, women over the age of 35 with preeclampsia have three times the risk of pregnancy-related mortality than their younger counterparts. These adverse outcomes have had a considerable impact on public health and many have called for policy change to decrease the prevalence of multiple gestation.

Elective single blastocyst transfer appears to significantly lower the risk of multiple gestation without compromising PR. However, more studies, ideally prospective and randomized, are needed to further investigate the role of eSBT in older women with blastocysts available for cryopreservation, as women of advanced maternal age are at particularly high risk of complications associated with multiple gestations. Preliminary results suggest that good prognosis patients undergoing BT, including those of advanced maternal age, who wish to avoid a multiple gestation should transfer a single blastocyst, reassured that PRs do not seem to be significantly compromised. 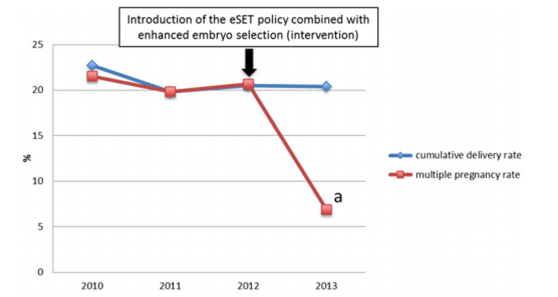 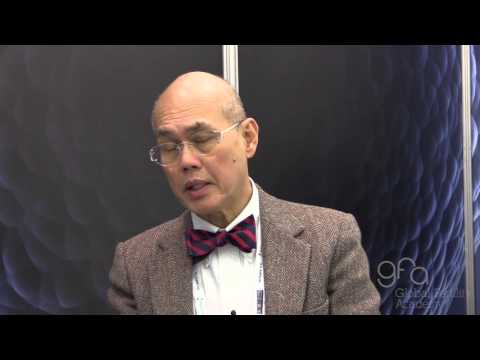 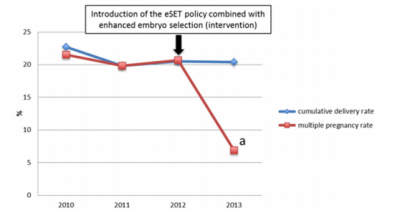 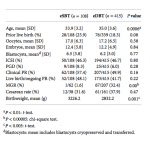