An outpatient medical procedure that is used to remove or destroy the endometrial lining of the uterus in women.

Endometrial ablation is the procedure in which is removed or destroyed the endometrium (the inner layer of uterus) and superficial myometrium (the middle layer of the uterine wall, consisting mainly of uterine smooth muscle cells). The main purpose is to destroy the basal layer of endometrium and inhibit its regeneration, hence preventing blood loss during menses. Women who suffer from excessive menstrual bleeding (Pic. 1) and who have failed medical therapy and do not wish to undergo a hysterectomy (surgical removal of the uterus) are reccomended to undergo endometrial ablation.

Endometrial ablation has been explored and many devices and techniques have been developed and have been found to be effective. The procedure is almost always performed as an outpatient treatment, either at the hospital, ambulatory surgery center, or physician office. The endometrial ablation procedure is primarily performed while patients are under local and/or light sedative anesthesia, or if necessary, general or spinal anesthesia. Patients normally leave the treatment facility within one hour following the procedure and generally spend one day resting at home, before returning to the activities of daily living.

A number of treatment options are available (Pic. 2):

Endometrial Ablation System (Minerva Surgical), Minerva works by generating heat from plasma energy that is created and contained inside a leak-proof ablation array that takes the shape of the uterine cavity. The hot membrane surface of the array ablates (destroys) the endometrium.

The Minerva procedure is the fastest FDA (Food and Drug Administration) approved treatment, average procedure time is 3.1 minutes from device insertion to removal, and is usually performed under local and/or conscious sedation anesthesia. Most patients leave the treatment center within one hour of treatment.

The Novasure average procedure time is 5 minutes from device insertion to removal and is usually performed under local and/or conscious sedation anesthesia. Most patients leave the treatment center within one hour of treatment.

Hydro-Thermal Ablation System, uses a hysteroscope device (Pic. 3) which is inserted into the uterus through the cervical canal, to help doctors safely confirm proper probe placement and to see the area they are treating. In this procedure, the doctor looks at the inside of the uterus with the hysteroscope and then fills the uterus with saline fluid. The fluid is then slowly heated and the lining of the uterus is burned so that menstrual bleeding periods become less heavy and, in some cases, even stops. The fluid is then cooled and removed by special tubing to protect the external areas of the body from any burns.

The average procedure time is 26 minutes.

Endometrial Ablation System, is a treatment that creates sub-zero temperatures to freeze and ablate the endometrium. Following the application of local anesthetic around the cervix, a physician uses ultrasound to guide the placement of a cryoprobe (a long slender pointed surgical instrument, used to apply extreme cold to tissues) to the right uterine horn (cornua). The cryoprobe is activated, reducing its temperature to minus 60°C. The cryoprobe is kept in place while ice is formed in the uterine cavity, under ultrasound observation. Once the appropriate time has passed and/or the appropriate depth of ice has been achieved, the cryoprobe is warmed to 37°C. The cryoprobe is then repositioned to the untreated left uterine horn and the procedure is repeated. Finally, the cryoprobe is warmed and removed.

Transcervical Resection of the Endometrium (TCRE) or Loop Resection with Rollerball

Ablation as it is commonly called, utilizes a hysteroscope, through which a bi-polar radio frequency electrocautery cutting loop is deployed to resect (remove) the superficial endometrium, followed by a bi-polar radio frequency rollerball tool to ablate the remaining underlying endometrium via cauterization. It is a proven procedure, being a day-care procedure with rapid recovery.

This system utilized a heated saline filled balloon which was inserted into the uterine cavity to ablate the endometrium. The fluid was safely contained in a flexible and non-allergenic Silastic membrane that conformed to most uterine cavity shapes and sizes.

After the procedure, the endometrium heals by scarring over, thus reducing or eliminating future uterine bleeding. The patient's hormonal functions will remain unaffected because the ovaries are left intact.

First generation techniques such as transcervical resection of endometrium, rollerball ablation of endometrium came as a boon to conservative surgery but had their own set of shortcomings such as requirement of anaesthesia, hysteroscopic complications, and long learning curve.

For all types of hysteroscopic ablation, satisfactory proper visualization of the uterine cavity is vital for successful and safe performance. In addition, the number of well-trained personnel in hysteroscopic surgeries is still limited. Other challenges and financial constraints in developing countries result in difficulties in maintaining perfectly working hysteroscopic equipment.

Although rare, the procedure can have serious complications including:

Women who wish to become pregnant should not undergo endometrial ablation.

With an ongoing pregnancy the risk for pre term delivery (31%), pre term labour (21%), pre term rupture of membranes (17%), intra uterine growth restriction (12%) malpresentations (39%), and pathological placentation (17%) are all increased. The latter is notorious, leading to a wrong implantation of the placenta in the uterine wall with a high rate of hysterectomy after caesarean section. 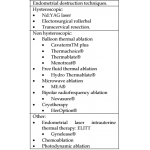 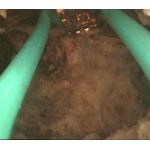