A process of injecting of washed sperm into the uterus with a catheter for treatment of infertility.

Intrauterine insemination (IUI) as a type of artificial insemination involves the placement of sperm directly into the uterus at the time of ovulation, either in a natural menstrual cycle or following ovarian stimulation. The process allows the concentration of sperm in a small volume of culture media and then the concentrated sperm is placed into the uterus through a transcervical catheter. IUI has the advantages of being less invasive and more affordable than other assisted reproduction techniques such as IVF. IUI theoretically allows a relatively higher number of motile sperm to reach the oocyte. The rationale for washing sperm is to remove prostaglandins, infectious agents, and antigenic proteins as well as to remove immotile spermatozoa, leucocytes, and immature germ cells.

Unlike intracervical insemination, intrauterine insemination normally requires a medical practitioner to perform the procedure (see Tab. 1). A female under 30 years of age has optimal chances with IUI; for the man, a total motile sperm count of more than 5 million per ml is optimal. In practice, donor sperm will satisfy these criteria. A promising cycle is one that offers two follicles measuring more than 16 mm, and estrogen of more than 500 pg/mL on the day of hCG administration. A short period of ejaculatory abstinence before intrauterine insemination is associated with higher pregnancy rates. However, GnRH agonist administration at the time of implantation does not improve pregnancy outcome in IUI cycles according to a randomized controlled trial.

Before artificial insemination is turned to as the solution to impregnate a woman, doctors will require an examination of both the male and female involved in order to remove any and all physical hindrances that are preventing them from naturally achieving a pregnancy. The couple is also given a fertility test to determine the motility, number, and viability of the male's sperm and the success of the female's ovulation (see Tab. 2). From these tests, the doctor may or may not recommend a form of artificial insemination (intrauterine insemination or intracervical insemination).

The sperm used in artificial insemination may be provided by either the woman's partner sperm or by a sperm donation (donor sperm). Though there may be legal, religious and cultural differences in these and other characterizations, the manner in which the sperm is actually used in artifical insemination would be the same, If the procedure is successful, the woman will conceive and carry a baby to term in the normal manner (see Tab. 1). A pregnancy resulting from artificial insemination will be no different from a pregnancy achieved by sexual intercourse. In all cases, the woman would be the biological mother of any child produced by AI, and the male whose sperm is used would be the biological father.

Timing is critical, as the window and opportunity for fertilization is little more than twelve hours from the release of the ovum. To increase the chance of success, the woman's menstrual cycle is closely observed, often using ovulation kits, ultrasounds or blood tests, such as basal body temperature tests over, noting the color and texture of the vaginal mucus, and the softness of the nose of her cervix. To improve the success rate of artifical insemination, drugs to create a stimulated cycle may be used, but the use of such drugs also results in an increased chance of a multiple birth.

Sperm can be provided fresh or washed. The washing of sperm increases the chances of fertilization. Pre- and post-concentration of motile sperm is counted.

When ovarian stimulation is used, patients underwent afirst cycle with orally administered 50 mg/day clomiphene citrate, from days 3 to 7 of the menstrual cycle, along with subcutaneous human menopausal gonadotropin or recombinant FSH at days 3, 5 and 7 of the cycle. The follicular development is monitored by transvaginal ultrasound at days 2 (basal) and 8 of the cycle. Subsequently, daily monitoring is performed until follicular diameter measured 18 to 20 mm and thickness of the endometrium was greater than 7 mm. When one or (at most) three follicles measured the expected mean diameter, hCG or recombinant hCG is administered. IUI is scheduled 36 to 40 hours after hCG or r-hCG administration and confirmation of follicular rupture.

The patient is on bed rest for 20 minutes, and the supplementation of the luteal phase is administered orally with natural progesterone at a dose of 200 mg every 12 h from the day after IUI until confirmation of the embryonic heartbeat using an ultrasound.

Some countries restrict artificial insemination in a variety of ways. For example, some countries do not permit AI for single women, and some Muslim countries do not permit the use of donor sperm. As of May 2013, the following European countries permit medically assisted AI for single women: Armenia, Belarus, Belgium, Bulgaria, Cyprus, Denmark, Estonia, Finland, Germany, Greece, Hungary, Iceland, Republic of Ireland, Latvia, Republic of Macedonia, Moldova, Montenegro, Netherlands, Romania, Russia, Spain, Ukraine, United Kingdom.

Among the assisted reproductive techniques, IUI is considered a first-line procedure due to its simplicity, easy management, low cost, and absence of potentially serious complications.

Here are a variety of indications for using IUI such as unexplained infertility, congenital anomalies of the genital tract, erectile dysfunction, retrograde ejaculation, antisperm antibodies (woman's immune system may be rejecting her partner's sperm as invading molecules), female sexual dysfunction (vaginismus), cervical scarring, cervical blockage from endometriosis, or thick cervical mucus. Another common use of IUI is to enhance the efficacy of treatment by ovulation induction for ovulatory disorders.

Two important physiological properties of sperm that are necessary for successful insemination are the number of highly motile sperm and their survival. Motility is considered an important success factor for natural pregnancy as well as for IUI. The evidence reviewed suggests that IUI may be offered to couples with male factor infertility, in a low technology setting, if the total motile sperm count is more than 5 million per specimen.

IUI can be used in conjunction with controlled ovarian hyperstimulation (COH). Still, advanced maternal age causes decreased success rates; women aged 38–39 years appear to have reasonable success during the first two cycles of ovarian hyperstimulation and IUI. However, for women aged over 40 years, there appears to be no benefit after a single cycle of COH/IUI. Medical experts therefore recommend considering in vitro fertilization after one failed COH/IUI cycle for women aged over 40 years (see Tab. 3).

The limitations of IUI are few. They included the potential risk of infection from uterine catheterization and injection of the semen specimen. However, this risk has been reported to be 0.01 – 0.2%. In addition, ectopic pregnancies and spontaneous miscarriages may occur, which is not different from other infertility treatment modalities. The production of antisperm antibodies is another hypothetical drawback of the use of IUI. The incidence of multiple pregnancy and ovarian hyperstimulation syndrome (OHSS) with IUI may occur and is related to the use of ovarian stimulation with IUI. The risk of OHSS may be decreased by use of low-dose drug regimens, close monitoring, and strict cycle cancellation criteria.

If unwashed semen is used, it may elicit uterine cramping, expelling the semen and causing pain, due to content of prostaglandins (prostaglandins are also the compounds responsible for causing the myometrium to contract and expel the menses from the uterus, during menstruation).

The success rate of IUI depends on several factors (see Tab. 3), including the cause and duration of the infertility, a woman’s age, whether there is controlled ovarian hyperstimulation (COH), the type of medication used and the number of IUI attempts performed previously. To obtain this success, severe male factors, tubal and peritoneal factors and severe endometriosis must be excluded. Other important factors that have a strong influence on the IUI outcome include semen quality and several seminal parameters, such as the postwash total motile sperm count (TMC), have been well evaluated as predictors of IUI success. However, studies have shown that the predictive sperm parameters and threshold values that are related to semen characteristics for IUI success are controversial. Because there is no consensus regarding the ideal limits of these parameters, including sperm concentration and TMC, it is difficult to assess which couples could benefit from IUI. Therefore, most clinicians that specialize in human reproduction often indicate three to six, or more, cycles of IUI before more complex ARTs are attempted.

The pregnancy rate of IUI is reported to 10–20% per patient, but the reported rates range from as low as 5% to as high as 70%. Based on the etiology of infertility, the highest rates are reported when IUI was used in patients with anovulation who are undergoing ovulation induction therapy at the time of the IUI treatment, male factor infertility, and unexplained infertility. In patients with endometriosis, the pregnancy rates are the lowest. The number of mature follicles (17 mm in diameter or more) is another prognostic factor in IUI success, where the presence of 3-4 mature follicles is associated with higher pregnancy rates and a lower incidence of high-order multiple pregnancies. Other prognostic factors included female age, infertility duration and amount of motile sperm. 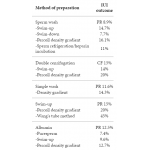 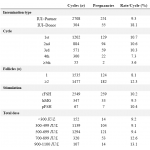 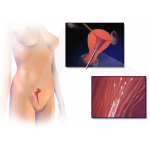