The way a person lives.

Lifestyle is a term to describe the way individuals, family circles, and societies live and which behavior they manifest in coping with their physical, psychological, social, and economic environments on a day-to-day basis.

Lifestyle is expressed by daily work and leisure profiles, including activities, attitudes, interests, opinions, values, and allocation of income. Lifestyle is a composite of motivations, needs, and wants and is influenced by factors such as culture, family, reference groups, and social class.

The leading causes of global deaths today are largely lifestyle related. A healthy lifestyle is an important predictor of future health, productivity and life expectancy. It has been found to reduce the factors which contribute to health risks.

The combination of the main healthy lifestyle factors-maintaining a healthy weight, exercising regularly, following a healthy diet, and not smoking-seem to be associated with as much as an 80% reduction in the risk of developing the most common and deadly chronic diseases.

Lifestyle diseases or chronic diseases are associated with the way a person or group of people lives on a daily basis. In other words, lifestyle diseases characterize those diseases whose occurrence is primarily based on the daily habits of people and are a result of an inappropriate relationship of people with their environment.

Lifestyle is associated with the development of many chronic diseases. The World Health Organization (WHO) has recognized diabetes, hypertension, stroke, diabetes, obesity, high cholesterol, cardiovascular disease and stroke, cancer and chronic lung disease as major non-communicable diseases (NCDs). There are many other conditions associated with modern living like stress, depression and substance abuse are important factors also contributing to lifestyle related morbidity and mortality like suicides. These major NCDs share common lifestyle related risk factors like physical inactivity, unhealthy diet, tobacco use and harmful use of alcohol. Globally, the current scenario of NCDs is the major cause of morbidity and mortality.

Recently, the pivotal role that lifestyle factors play in the development of infertility has generated a considerable amount of interest. Lifestyle factors are the modifiable habits and ways of life that can greatly influence overall health and well-being, including fertility. Many lifestyle factors such as the age at which to start a family, nutrition, weight, exercise, psychological stress, environmental and occupational exposures, and others can have substantial effects on fertility; lifestyle factors such as cigarette smoking, illicit drug use, and alcohol and caffeine consumption can negatively influence fertility while others such as preventative care may be beneficial. A summary table of each lifestyle and the associated relative risk (RR) and odds ratio (OR) is provided (Tab. 1).

The importance of lifestyle factors in health and disease has been the subject of many studies, and much of the information has been collected and analyzed in reports that unequivocally show a close relationship between lifestyle factors and many chronic diseases.

Because of its association with chronic diseases, each individual lifestyle factor becomes an important element to take into account in the prevention of these diseases. Furthermore, the combination of preventive lifestyle factors has also been reported to prevent the occurrence of chronic medical conditions.

Prevention initiatives, such as the adoption of healthy lifestyle habits and adherence to prescribed medications, offer an evidence based approach, proven to reduce cardiac mortality and morbidity. Coronary heart disease is an incurable condition. The only approach known to slow its progression is healthy lifestyle change and concordance with cardio-protective medicines.

Prevention trials have shown that lifestyle interventions that achieve and maintain significant weight loss can have a favourable effect on diabetes and cardiovascular risk factors. It is plausible that these lifestyle changes would also have favourable effects on the risk of obesity-related neoplasia.

Patients often wonder if there is anything they can do to optimize their natural fertility or increase the effectiveness of infertility treatments.

Lifestyle factors can be modified to enhance overall well-being and they are ultimately under one’s own control. They play a key role in determining reproductive health and can positively or negatively influence fertility.

Observational and small intervention studies show that modest weight loss is associated with restoration of ovulation in anovulatory women and improves the likelihood of a pregnancy. Weight loss has been advised for the improvement of reproductive function in overweight women, specifically with polycystic ovary syndrome.

Physical activity has been shown to confer a protective effect on fertility when coupled with weight loss in obese women. Any form of exercise will help increase the chances of regularity and possibly ovulation.

The optimal fertility diet has yet to be established, and the effects of nutritional factors on fertility are largely unknown. However, dietary modifications have been shown to improve ovulatory disorder infertility.

Global risks for mortality are indicated as high blood pressure (13%), tobacco use (9%), high blood glucose (6%), physical inactivity (6%) and being overweight and obese (5%). These risks are associated with increased chances of contracting any of the four main non-communicable diseases , namely cardiovascular disease, diabetes, chronic lung diseases and cancers, which affect individuals across all income groups in different countries.

Most of the fatalities are linked closely to health-risk behaviours that are categorised in six areas: behaviours that contribute to unintentional and intentional injuries; tobacco use; alcohol and other drug use; sexual behaviours; unhealthy dietary behaviours; and physical inactivity. Health risks can be countered by a healthier lifestyle which includes regular physical activity, proper nutrition, elimination of unhealthy behaviours, having regular medical check-ups and maintaining good emotional health.

Unhealthy dietary practices which can be the cause of overweight and obesity, are associated with a number of disabling and potentially fatal conditions and diseases, including heart disease, cancer, diabetes and high blood pressure.

There is indisputable evidence for the adverse effects of overweight and obesity on women's reproductive health. Furthermore, pregnancies in obese women are associated with an increased risk of complications during pregnancy and delivery, causing an increase in maternal and neonatal morbidity and mortality. Obese men are three times more likely to exhibit a reduction in semen quality than men of a normal weight. A relationship also exists between obesity and erectile dysfunction.

Obesity is not the only way in which weight can impact fertility. Men who are underweight tend to have lower sperm concentrations. For women, being underweight and having extremely low amounts of body fat are associated with ovarian dysfunction and infertility.

Physical inactivity has been associated with increased risk of cardiovascular disease, various cancers, obesity and other health problems.

However, excessive exercise can negatively alter energy balance in the body and affect the reproductive system. Extreme exercise may lead to anovulation and infertility, whereas exercise may result in improved ovulation and fertility in anovulatory obese patients.

A healthy amount of exercise in men can be beneficial. However bicycling more than five hours per week has been demonstrated to have a negative correlation with both total motile sperm counts and sperm concentration.

Tobacco use in all its forms is considered a major threat to life as smoking increases the chances of dying prematurely from heart attack, several types of cancer, bronchitis, pneumonia, stroke and may even deplete the energy levels required to cope with daily activities. Cigarette smoking was associated with a significant decrease in sperm concentration. Similar to women, smoking cessation improves fecundity.

The inability to cope with stress may also contribute to unhealthy practices such as excessive eating, drinking and smoking.

The aforementioned unhealthy habits and behaviours, causing morbidity and/or mortality in Western society, are behaviour-related and are therefore preventable if identified and changed at an early stage.

It is the role of the physician to help the patient identify modifiable risk factors, especially given the cost and time commitment associated with infertility treatments. If patients are made aware of simple lifestyle changes that could impact their fertility, they are generally receptive to making those adjustments. All patients should be encouraged to strive for a healthy, sustainable lifestyle. In areas where there is clear evidence that a lifestyle behavior may impact fertility, such as smoking, the patient should be encouraged to modify behavior. Making these lifestyle modifications may aid in achieving the ultimate goal of a healthy pregnancy. 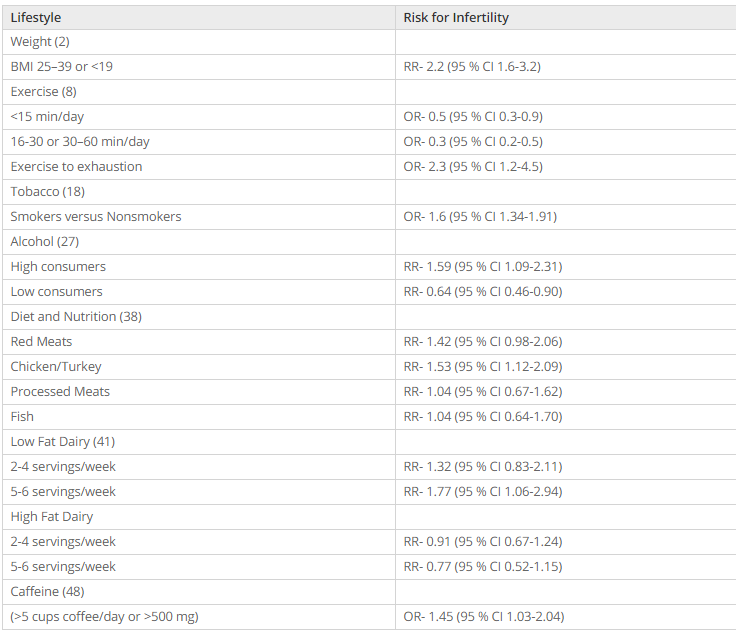 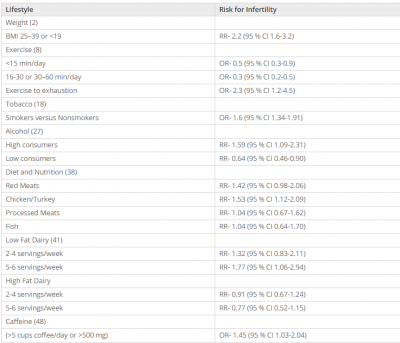