MACS  technique eliminates apoptotic sperms and may be indicated prior to ICSI, in order to guarantee that the injected spermatozoa are not damaged at a molecular level. Alternatively it could be combined with PICSI.

The externalization of the phospholipid phosphatidylserine (PS) to the sperm plasma membrane is a characteristic feature of the apoptotic phenomenon that occurs early during the process of sperm cell death. This basic knowledge has prompted investigators to develop a magnetic-based selection system for sperm cells that can separate early apoptotic from non-apoptotic germ cells (MACS).

Human sperm quality is defined by the classical parameters, concentration, motility and morphology, according to standard WHO diagnostic semen analysis. Nevertheless, hidden anomalies affecting spermatozoa membranes and causing apoptosis are present. Such features are not routinely detected in ejaculated spermatozoa but they have been proven to have a negative impact on ART outcome. Indeed, successful assisted reproduction is mainly dependent on the quality of the sperm plasma membrane, requiring normal integrity and function to provide motility, acrosome reaction, and fertilization. Spermatozoa with impaired membrane integrity occur more frequently in infertile men, partly explaining suboptimal results in assisted medical procreation. However, striking modifications of sperm plasma membrane occur physiologically in ejaculated sperm. During capacitation, there is a lipid remodelling of the sperm plasma membrane due to phospholipids translocation that lead to externalization of phosphatidylserine (EPS) and phosphatidylethanolamine, and to an albumin mediated efflux of cholesterol resulting in an increase in membrane fluidity.

Externalization of phosphatidylserine (EPS) on ejaculated mature spermatozoa is either the result of a plasma membrane modification because of capacitation and/or acrosome reaction or the sign of an early apoptotic phenotype. Apoptosis in ejaculated sperm is the result of a spermatogenetic failure, thus an abortive apoptotic process that started before ejaculation.

Annexin V binding to spermatozoa characterizes modified sperm plasma membrane. MACS Technology uses annexin V-conjugated superparamagnetic microbeads (50 nm) to separate nonapoptotic spermatozoa from those with deteriorated plasma membranes with EPS. The spermatozoa/microbeads suspension is loaded on a separation MS column (specialized columns for MACS techniques) containing iron balls, which is fitted in a miniMACS separator (magnet), attached to a multistand. The fraction with intact membranes that passed through the column is labeled as MACS -negative fraction, depleted in phosphatidylserine (PS), whereas the fraction composed of apoptotic or deteriorated PS-positive membranes spermatozoa is retained in the separation column and labeled as MACS -positive fraction. After the column is removed from the magnetic field, the retained fraction is eluted using annexin V-binding buffer.

The positive fraction (called like this due to the fact that the spermatozoa stay retained in the magnetic columns because of their damaged DNA) will allow us to recover a negative fraction (made up of spermatozoa with unharmed DNA), with optimal sperm characteristics to be able to proceed. In other words, the spermatozoa passing through the magnetic columns without being retained will prove to have an unharmed DNA and, therefore, they will be eligible to be used.

Removal of MMP-disrupted (Mitochondrial Membrane Potential) spermatozoa is of interest in ART, since the functionality of mitochondria differentiates human spermatozoa with high and low fertilizing ability. MACS method of sperm selection is recommended for patient with:

Annexin V-binding technique may be indicated prior to ICSI, in order to guarantee that the injected spermatozoa are not damaged at a molecular level. Alternatively it could be combined with PICSI.

The use of the MACS technique prior to sperm cryopreservation allowed a significantly higher cryosurvival rate expressed in motility following cryopreservation-thawing. Quantitative decrease of the percentage of externalization of the phosphatidylserine apoptotic spermatozoa, their removal might protect healthy spermatozoa from reactive oxygen species production. Indeed, excessive reactive oxygen species produced either by the presence of immature and abnormal spermatozoa or seminal leukocytes result in altered semen parameters, including viability, motility and morphology.

Further investigations need to be conducted to assess safety of the magnetic field and the eventual residual microbeads on spermatozoa.

Implementation of MACS is very promising for the future of ART because MACS has many potential applications in diverse male infertilities due to the possibility of selecting the antibody of the ligand protein used for sperm selection. Very recently, a newly developed solid phase molecular filtration system combining classical glass wool filtration with PS-binding properties of annexin V has been proven to enrich spermatozoa free of apoptosis markers to the same extent as MACS but without the potential inconvenient of an accidental transmission of supermagnetic microbeads into oocytes. Overall, phosphatidylserine might become the prognostic marker of sperm fertility potential easy to use for sorting spermatozoa in ART. In consequence, discarding externalization of the phosphatidylserine spermatozoa may optimize assisted medical procreation outcomes. 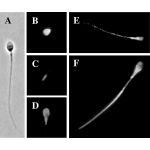 “Removal of spermatozoa with externalized phosphatidylserine from sperm preparation in human assisted medical procreation: effects on viability, motility and mitochondrial membrane potential” ―by de Vantéry Arrighi et al. licensed under CC BY 2.0
“Annexin V-binding and assisted reproduction technologies” ―by Denaday licensed under CC BY 4.0
Print
Save as PDF