MSOME is accomplished by utilizing an inverted light microscope equipped with high-power optics enhanced by digital imaging to achieve a magnification which is much higher than the magnification used habitually by embryologists in sperm selection for the intracytoplasmic sperm injection (ICSI) procedure (200× to 400×) or even the level employed in routine semen examination (1000×).

The accuracy with which morphological normality of spermatozoa can be assessed depends on the resolution power of the optical magnification system. Spermatozoa appearing as morphologically normal at 1000× magnification may in fact carry various structural abnormalities that can only be detected at higher optical magnifications (>6000×). The improvement in observation is mainly due to the replacement of Hoffman modulation contrast by the Nomarski interferential modulation contrast. Thus, the use of MSOME may represent, potentially, improvement in morphological analysis of sperm.

Among MSOME parameters, the presence of a sperm nuclear vacuole is one of the most important findings. Recent results have shown that the presence of sperm nuclear vacuoles is negatively correlated with the rates of fertilization, pregnancy, and implantation. Sperm vacuolation has also been reported to be negatively related to the parameters in conventional and computer-assisted semen analyses (CASA). These findings suggest that the observation of sperm vacuolation can be used to predict the sperm function.

Whereas a routine morphological examination is applied to semen samples as a whole, MSOME focuses only on the fraction of motile spermatozoa. Analyzing only the motile spermatozoa by MSOME can confer an additional advantage, as it will provide information regarding the sample fraction with a higher potential for achieving fertilization and development. Even though analyses using other criteria also employ high magnification, the characteristics of these procedures (i.e., fixation and staining) preclude the possibility of obtaining information for the motile portion.

As with many laboratory grown techniques, the use of MSOME as a diagnostic tool per se seems far from standardized, with different definitions available for a normal spermatozoon. Moreover, information regarding the clinical impact of these sperm features is limited.

Probably, the lack of a predictive value of MSOME analysis is related to the fact that analysing the morphology pattern seen in an entire semen sample is not reflecting the likelihood of the individual sperm employed to fertilize the oocyte. It is also clear that the definition of sperm morphology and its assessment, even in an individual sperm, is a very controversial field.

Although MSOME was developed only as a selection criterion, its application as a method for classifying sperm morphology may represent an improvement in the evaluation of semen quality, with potential clinical repercussions, particularly with regard to assisted reproduction techniques.

MSOME has yielded a more strict definition of normal spermatozoa than conventional semen analyses, and new abnormalities, particularly sperm head vacuoles, have been described. The high-magnification observation technique has been adapted to select the best spermatozoa for oocyte injection, introducing a new technique named intracytoplasmic morphologically selected sperm injection (IMSI). Morphological normalcy of the sperm nucleus, as defined by MSOME, is significantly and positively associated with both the rate of fertilization and the pregnancy outcomes. In addition, the rate of pregnancy after IMSI is significantly higher than that observed following routine ICSI procedures (66.0% versus 30.0%). More recently, the results of ICSI with sperm selected according to conventional light microcopy or MSOME have been controversial, and the technique is thought to be time-consuming.

Although semen analysis remains fundamental to the evaluation of male fertility, heterogeneities described between semen samples from the same individual may undermine the diagnostic reliability of a single exam. In fact, different studies highlighted marked interejaculate coefficients of variation for normal morphology. In fact, the MSOME classification system was shown to be very stable, presenting mean percentages of normal sperm (1.6 ± 2.2% vs. 1.6 ± 2.2%) and sperm with large nuclear vacuoles (25.2 ± 19.2% vs. 26.1 ± 19.0) that were practically identical between the two evaluations. It was particularly interesting that variations between the two morphological MSOME evaluations are also not observed even when the interval between the exams is much more than 10 weeks, a period of one spermatogenic cycle, reinforcing the stable aspect of the analysis.

In the specific case of IUI, seminal evaluation using MSOME could represent an adjunct tool to predict the efficacy of the technique. Because there are doubts regarding the efficacy of IUI for male factor, MSOME could also play a role as a method for the classification of sperm morphology to offer an additional parameter for the indication of the technique. Besides the woman's age, the duration of infertility and the concentration of motile spermatozoa, which are predictive factors that are considered to be important by other investigators, it is suggested that 2% morphologically normal spermatozoa at MSOME is desirable to maximize the likelihood of pregnancy following IUI.

Unfortunately MSOME application beyond sperm selection is not usual. 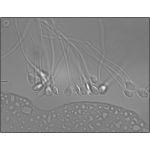