The surgical removal of uterine leiomyomas.

Myomectomy, sometimes also fibroidectomy, refers to the surgical removal of uterine leiomyomas, also known as fibroids. It is usually recommended when more conservative treatment options fail for women who want fertility preserving surgery or who want to retain the uterus. You may also be able to conceive after having MRI-guided ultrasound surgery, although this procedure is not widely available.
The presence of a fibroid does not mean that it needs to be removed. Removal is necessary when the fibroid causes pain or pressure, abnormal bleeding, or interferes with reproduction. The fibroids needed to be removed are typically large in size, or growing at certain locations such as bulging into the endometrial cavity causing significant cavity distortion.
A myomectomy can be performed in a number of ways, depending on the location and number of lesions and the experience and preference of the surgeon. Either a general or a spinal anesthesia is administered.

There are three types of myomectomy:

In a hysteroscopic myomectomy (also called transcervical resection), the fibroid can be removed by either the use of a resectoscope, an endoscopic instrument inserted through the vagina and cervix that can use high-frequency electrical energy to cut tissue, or a similar device. A fibroid that is located in a submucous position (that is, protruding into the endometrial cavity) may be accessible to hysteroscopic removal. This may apply primarily to smaller lesions as pointed out by a large study that collected results from 235 patients suffering from submucous myomas who were treated with hysteroscopic myomectomies; in none of these cases was the fibroid greater than 5 cm. However, larger lesions have also been treated by hysteroscopy. Recovery after hysteroscopic surgery is but a few days.

A laparotomic myomectomy (also known as an open or abdominal myomectomy) is the most invasive surgical procedure to remove fibroids. Traditionally a myomectomy is performed via a laparotomy with a full abdominal incision, either vertically or horizontally. Once the peritoneal cavity is opened, the uterus is incised, and the lesion(s) removed. The open approach is often preferred for larger lesions. One or more incisions may be set into the uterine muscle and are repaired once the fibroid has been removed. Recovery after surgery takes six to eight weeks.

Since myomectomy can be associated with significant blood loss, this procedure is often reserved for cases of a single or few myomas. In skilled hands many fibroids can be removed with the use of a hemostatic agent. The procedure of choice is the use on vasopressin injected perivascularly around the uterine and ovarian vessels. This occludes both arms of the anastamosis and hence this has been found to be superior to older methods such as tourniquets which occlude only the uterine vessels.

Complications of the surgery include the possibility of significant blood loss leading to a blood transfusion, the risk of adhesion or scar formation around the uterus or within its cavity, and the possible need later to deliver via cesarean section.
It may not be possible to remove all lesions, nor will the operation prevent new lesions from growing. Development of new fibroids will be seen in 42-55% of patients undergoing a myomectomy.
It is well known that myomectomy surgery is associated with a higher risk of uterine rupture in later pregnancy. Thus, women who have had myomectomy (with the exception of small submucosal myoma removal via hysteroscopy, or largely pedunculated myoma removal) should get Cesarean delivery to avoid the risk of uterine rupture that is commonly fatal to the fetus.

Although myomectomy, sometimes also fibroidectomy is a relatively frequently performed procedure, statistics on long term outcomes and prognosis are still relatively infrequent. This is primarily due to a lack of clear data on the recurrence rate of myomas after myomectomy and on the effect of surgical removal of fibroids on fertility. 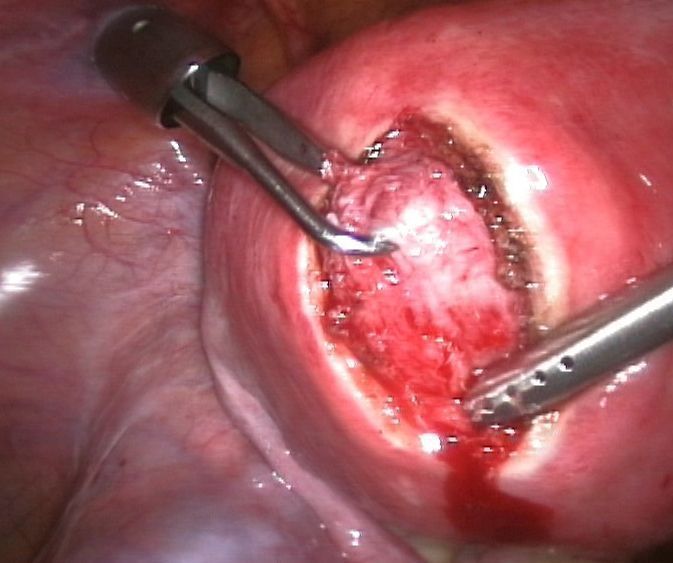 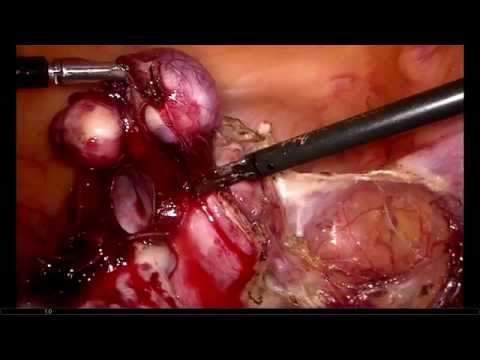 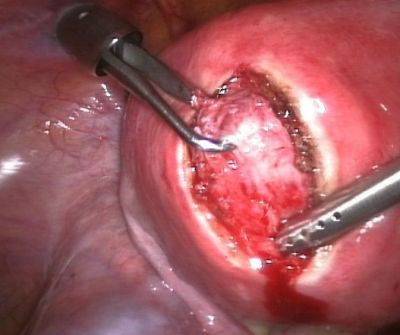