Drugs, which are used as a therapy of menstrual disorders.

About Pharmacotherapy of menstrual disorders

Hormonal imbalance can be the cause of polymenorrhea. Depending on which hormon is decreased during menstrual cycle, the replacement takes place.

In case of estrogen deficiency and shor follicular phase (the phase of the menstrual cycle during which follicles in the ovary mature) the option is to use an estrogen substitution of 4-10 day cycle or ovulation induction with clomiphene. Usually, the menstrual cycle is stabilized in 2-3 months.

Another problem might be an insufficient function of the luteum body (progesterone and estrogen secreting body in the female reproductive system), so the estrogen-progesteorne substitution is needed during the second phase of the cycle- from 14th to 25th day of cycle.

Very often more frequent menstrual bleeding can cause anemia, so it is necessary to start substitution therapy with an iron.


Available treatments for this disease are mostly hormonal drugs, such as contraceptive pills to regulate hormone imbalance.

As for physiological treatments to hypothalamic amenorrhoea (absence of menstrual periods due to disorder of hypothalamus), injections of metreleptin (a synthetic analog of the hormone leptin used to treat diabetes) have been tested as treatment to estrogen deficiency resulting from low gonadotropins (follicle stimulating hormone and luteinizing hormone which are made in the pituitary which stimulates the sex glands). Metreleptin has appeared effective in restoring defects in the hypothalamic-pituitary-gonadal axis (controls development, reproduction, and aging) and improving reproductive hormones.

However, SSRI therapy represents a possible hormonal solution to just one hormonal condition of hypothalamic amenorrhoea. Furthermore, because the condition involves the inter workings of many different neurotransmitters, much research is still to be done on presenting hormonal treatment that would counteract the hormonal affects.

Hypomenorrhea can be caused by hormonal imbalance of estrogen and progesterone. If there are low levels of estrogen, the innner lining of the uterus is thin, which leads to light menstrual blood flow during period.

Hormonal imbalance can be treated with oral contraceptives, which restore the natural cycle of hormonal release and contain both hormones.

In case of hypothyroidism, the scanty menstruation can be one of the signs. Due to lower levels of thyroid hormones produced by the thyroid gland, they must be supplement pharmacologically.

Causes may be due to abnormal blood clotting, disruption of normal hormonal regulation of periods or disorders of the endometrial lining of the uterus. Depending upon the cause, it may be associated with abnormally painful periods. Excessive bleeding can lead to anaemia (low concentration of red blood cells in blood) which presents as fatigue, shortness of breath and weakness.

If the degree of bleeding is mild, all that may be sought by the woman is the reassurance that there is no sinister underlying cause. If anaemia occurs then iron tablets may be used to help restore normal hemoglobin levels (the levels of the molecule in red blood cells that carries oxygen). Treatment may be given for a fixed period of time to replenish the body stores. Alternatively therapy may be continued long-term, often in a cyclical regimen on the days of menstruation.

The condition is often be treated with hormones, particularly as dysfunctional uterine bleeding commonly occurs in the early and late menstrual years when contraception is also sought. Usually oral combined contraceptive or progesterone only pills may be taken for a few months, but for longer-term treatment the alternatives of injected Depo Provera or the more recent progesterone releasing IntraUterine System may be used.

Fibroids may respond to hormonal treatment, else require surgical removal.

Many therapies are proposed for dysmenorrhea and include the use of non-steroid anti-inflammatory drugs (NSAIDs; used to treat inflammation, mild to moderate pain, and fever), oral contraceptives, vitamins and tocolytic agents (reduce or stop uterine contractions).

Combined oral contraceptives (COC) are generally accepted to be contraindicated in women with pre-existing cardiovascular disease, in women who have a familial tendency to form blood clots (such as familial factor V Leiden), women with severe obesity and/or hypercholesterolemia (high cholesterol level), and in smokers over age 35.

COC are also contraindicated for women with liver tumors, hepatic adenoma (an uncommon benign liver tumour that is hormone induced) or severe cirrhosis of the liver (the liver does not function properly due to long-term damage), those who have migraine and for those with known or suspected breast cancer.

Unfortunately, contraceptive pills are not free from side eﬀects. The most common side-eﬀects in women taking the hormonal drugs include headache, mood changes, gastrointestinal disturbances, and breast pain.

Severe adverse events are rare and usually related to thromboembolism (the blocking of a blood vessel by a particle that has broken away from a blood clot at its site of formation) and neoplasm (abnormal growth of tissue, commonly referred to as a tumor).

Oral iron supplements can cause side effects such as dark stools, constipation, upset of stomach and heartburn.

Because women suffering from olligomenhorea are only experiencing a period a few times a year, their body is also ovulating less which affect woman's ability to get pregnant. If ovulation does not take place then of course, pregnancy becomes impossible.

Oral contraceptives can restore the normal function of ovulation.

Amenorrhoea may have a very negative impact on fertility. Many women with amenorrhoea are also anovulatory.

Oral contraceptives can also restore the normal function of ovulation.

In some women it may be normal to have less bleeding during menstrual periods. Less blood flow may be genetic and, if enquiries are made, it may be found that woman’s mother and/or sister also have decreased blood flow during their periods.

Pregnancy can normally occur with this type of decreased flow during the period. The incidence of infertility is the same as in women with a normal blood flow.

Pharmacotherapy does not increase the possibility of conception.

It is necessary to solve underlying problem of menorrhagia. Pharmacotherapy can help to restore cyclicity of menstrual bleeding and ovulation, so the after some time, women is able to conceive a child.

If menorrhagia is caused by abnormal blood cotting, there is possibility of complication during pregnancy such as bleeding.

Dysmenorrhea have not impact of ability to concieve. Dysmenorrhea is characterized as a painful periods. Pharmacotherapy is focused on relief from pain. 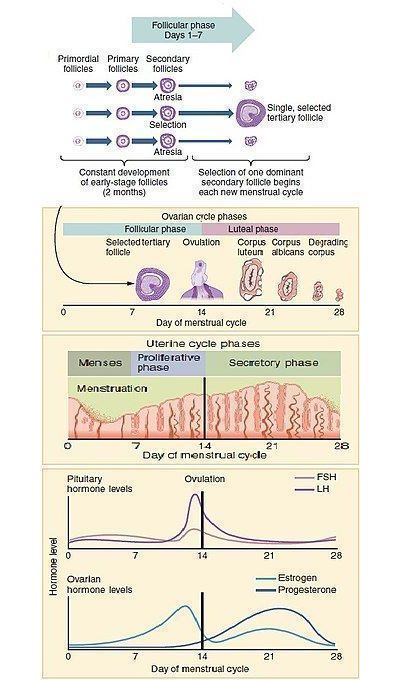