In order to protect the male germ cells from the influence of reactive oxygen species (ROS) and to stimulate their motility to increase the yield, a number of substances (Pic. 1) can be added to the ejaculate or the separation medium (Pic. 2).
Caffeine, pentoxifylline and 2-deoxyadenosine are substances that were used to stimulate motility. Recent approaches to stimulate spermatozoa include bicarbonate, platelet-activating factor (PAF), metal chelators, or hydrogen molecule (H2).

The use of xanthine derivatives (group of mild stimulants) like the methylxanthines caffeine (1,3,7-trimethyl-2,6-dioxopurine) and pentoxifylline for the pharmacological stimulation of sperm functions, especially for motility, is well known. This substance is an inhibitor of the phosphodiesterase that leads to increased cellular levels of cAMP. Considering that a defective energy metabolism of the spermatozoa is also a potential cause of male infertility, the use of motility stimulating substances to improve sperm motility and therefore fertilization rates appeared reasonable.

The results on the stimulation of sperm motility are conflicting. No effect was observed in patients with normal sperm production, while others observed a significant increase in motility and the number of progressively motile spermatozoa in patients with asthenozoospermia.In contrast to caffeine, the Food and Drug Administration (FDA) approved pentoxifylline for the administration to humans. The drug is used for systemic treatments of patients with cardio-vascular diseases. In addition, since its water solubility is higher than that of caffeine, this increases its usability.

Another interesting approach to improve sperm motility and thus sperm recovery from the ejaculate that has not yet been used for clinical application in assisted reproduction is the stimulation of the sperm cell's kinematics by bicarbonate (HCO3-). It is well known that bicarbonate is a major secretory component of the fallopian tube that stimulates sperm respiration, and is also postulated to be beneficial for fertilization. The latter appears to be supported by its effect on capacitation, induction of acrosome reaction and hyperactivated motility, which in turn is required for successful penetration through zona pellucida (protective layer of an egg). These physiological changes, especially acrosome reaction and hyperactivation, require the influx of Ca2+ into the spermatozoa. Acrosome reaction is absolutely dependent on the presence of extracellular calcium. Bicarbonate also facilitates the opening of voltage-gated Ca2+-channels, which are eventually involved in the increase in flagellar beat frequency shortly after stimulation. Thus, bicarbonate is an important mediator of sperm cell function.

Pharmacological motility stimulation could be used for those patients with impaired infertility due to reduced sperm motility (asthenozoospermia), decreased sperm count or motility (oligoasthenozoospermia) and in azoospermic patients (with no measurable level of sperm in semen) that are treated by testicular sperm extraction (TESE; extracting the few viable sperm cells present in that tissue). Following motility stimulation, suitable spermatozoa could be identified for intracytoplasmic sperm injection (ICSI) or intrauterine insemination (IUI).

An enhancement in post-thaw sperm motility was demonstrated when PTX was added prior to cryopreservation. This strategy may be clinically useful because it can improve the fertilizing potential of cryopreserved human semen.

The conflicting results on the effectiveness of treatment raised the question of the embryotoxicity of these substances. Finally, short-term incubation of spermatozoa with subsequent washing of the male germ cells did not produce such adverse effects in intrauterine insemination or ICSI.

Depending on the conditions and most importantly on the time of stimulation and the concentration of motile stimulants in the medium, over-stimulation will definitely result in a violation of sperm membrane integrity or too early acrosomal reaction (allows the binding and the fusion of egg with sperm). Hence, over-stimulated spermatozoa for an IUI or IVF treatment will not fertilize eggs because they are no longer able to bind to the zona pellucida. Unfortunately, no further progress has been made in this regard. For ICSI, this problem is not relevant as spermatozoa bypass all physiological barriers because they are directly injected into the eggs.

Male caffeine consumption appeared to be a significant risk factor for multiple gestations but had no effect on sperm count, motility or normal sperm morphology.

Stimulating sperm motility with pharmacological sperm motility stimulants has not effective per se, but allows an accurate selection of the most viable sperm for ICSI and IUI.

The use of PAF already resulted in pregnancies in IUI. Motility parameters such as mode of progression, lateral head displacement or velocity of fresh and cryopreserved spermatozoa significantly increase after stimulation with caffeine due to augmented energy obtaining.

The benefits of a treatment with pentoxifylline prompted its use in assisted reproduction programs. However, the results reported are rather conflicting. Thus, it was concluded that pentoxifylline should not be used indiscriminately. On the other hand, pentoxifylline has been successfully used to increase fertilization rates and as pre-treatment to stimulate epididymal and testicular sperm motility for ICSI. PTX may also be added to the cryoconservation medium as a supplement. PTX may work as a cryoprotective agent in normal semen, where different concentrations are necessary to neutralize the excessive reactive oxygen species (ROS).

It appears tempting to use a high bicarbonate medium not only for diagnostic purposes, but also in a clinical approach to improve sperm motility and functions for assisted reproduction. However, as elevated pH levels can disturb the mitotic spindle, a treatment of oocytes with bicarbonate should be performed with high care.

Sperm preparation by using a medium containing high levels of bicarbonate results in a significantly higher progressive motility as well as sperm recovery.

Increasing the number of motile cells in the vicinity of the oocyte significantly increased IVF success and reduced the incidence of fertilization defects in men with sperm dysfunction. Thus, in the potential target clinical population (men with sperm generally below WHO 2010 thresholds of motility), there would only need to be a relatively moderate increase in motility to potentially have a noticeable clinical benefit. If successful, this strategy would simplify and increase access to treatment. Increasing success rates of IUI and/or IVF would reduce dependence on ICSI and have a substantial cost saving. 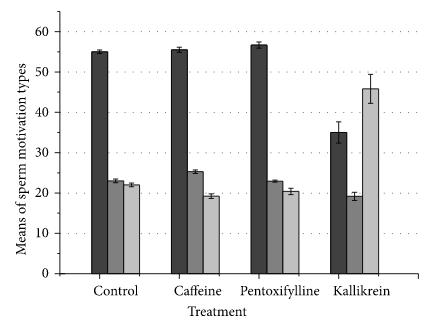 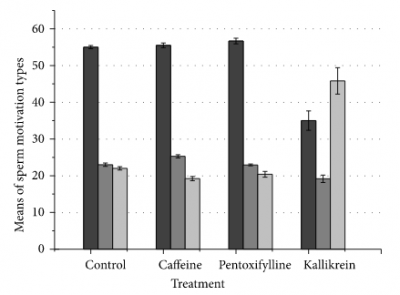 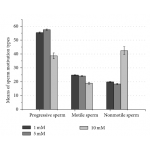 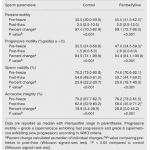