A surgical option for a treatment of unicornuate uterus.

About Surgical therapy of unicornuate uterus

An unicornuate uterus can be treated surgicaly. It is a rare congenital anomaly (2%–10% of all types of uterovaginal anomalies) in which the partial development of the unilateral müllerian duct (in the female, they will develop to form the uterine tubes, uterus, cervix, and the upper one-third of the vagina) results in various degrees of rudimentary horn connected or not to the opposite horn (Pic. 1).

The uterine anomaly covers a wide range of anatomical variability and is divided into four subgroups according to American Fertility Society classification of mullerian anomalies: (IIa) rudimentary horn with cavity communicating to Unicornuate uterus, (IIb) with cavity non communicating , (IIc) with no cavity,(IId) with no horn. Around 75%–90% of cases of unicornuate uterus with rudimentary horn are non-communicanting (the smaller horn connects to the uterus and vagina, but it is isolated).

The traditional surgical approach to treatment of unicornuate uterus has been through laparotomy (a surgical procedure involving a large incision through the abdominal wall to gain access into the abdominal cavity) and removal of the dilated non-communicating horn (Pic. 2).

Since the first report by Cannei et el, laparoscopic (a thin lighted tube that has a video camera is put into a tiny cut or incision in abdomen) resection of rudimentary uterine horn has rapidly become the standard treatment, specially to prevent severe complications as ectopic pregnancy or extensive endometriosis, which very often accompany this anomaly.

The surgical technique of choice has to be adapted to the type of malformation. In the case of a rudimentary uterine horn firmly joined to a unicornuate uterus, some details need to be kept in mind: First, there is not a well-defined limit between the unicornuate uterus and the rudimentary horn in some cases, which means the surgeon must proceed with extreme caution. Hysteroscopic transillumination (a painless procedure using bright light to check for abnormalities in certain body parts) can be useful in such a case, since opening the uterine cavity may affect future reproduction.

In some cases decision for hysterectomy (removal of uterus) is taken, in considering the perimenopausal age, complete family and refusal for consent for fertility preserving surgery.

Operative laparoscopy is an excellent alternative to laparotomy for the management of unicornuate uterus. Commonly accepted benefits of minimally invasive surgery are enhanced visualization of the cul-de-sac, less adhesion formations (process of attachment of a substance to the surface of another substance), smaller incisions, reduced postoperative pain, and shortened hospital stay.

It is important to consider that the ureter which is on the same side is closer to the uterine body, with a higher risk of lesion during rudimentary horn removal, and should be identified before the dissection.

Patients who have a unicornuate uterus with rudimentary horn have an increased incidence of gynecologic problems and tend to present, at menarche (the first menstruation) or later in their life, symptoms such as dysmenorrhoea (painful periods) and chronic pelvic pain.

Even when a resection of the rudimentary horn is performed, patients with a unicornuate uterus present a higher risk of obstetrical complications, such as first trimester abortion, second trimester abortion, intrauterine growth restriction, preterm delivery and intrauterine fetal demise, and only a few obstetrical risks can be reduced by a particular pregnancy follow up and specific interventions. 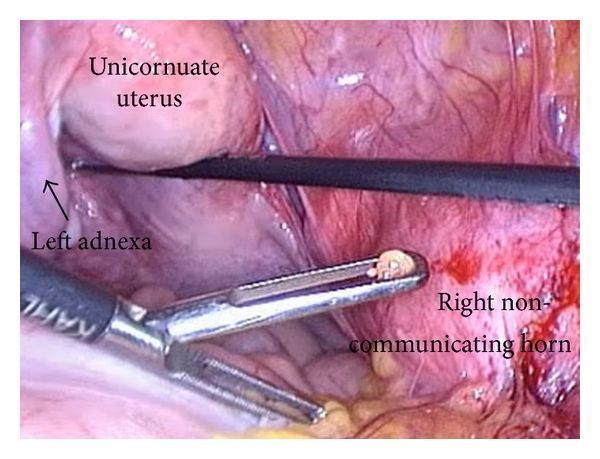 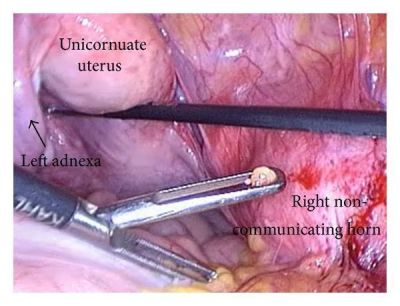 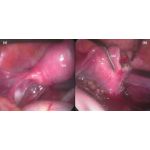