A woman's fertility peaks lasts during the twenties and first half of thirties, after which it starts to decline, with advanced maternal age causing an increased risk of female infertility (Pic. 2).

As women age, they experience a decline in reproductive performance leading to menopause. This decline is tied to a decline in the number of ovarian follicles (ovarian reserve; Pic. 3). Although about 1 million oocytes are present at birth in the human ovary, only about 500 (about 0.05%) of these ovulate, and the rest do not (ovarian follicle atresia). The decline in ovarian reserve appears to occur at a constantly increasing rate with age, and leads to nearly complete exhaustion of the reserve by about age 51.

A typical woman has 12% of her reserve at age 30 and has only 3% at age 40. 81% of variation in ovarian reserve is due to age alone, making age the most important factor in female infertility. As ovarian reserve and fertility decline with age, there is also a parallel increase in pregnancy failure and meiotic errors resulting in chromosomally abnormal conceptions. 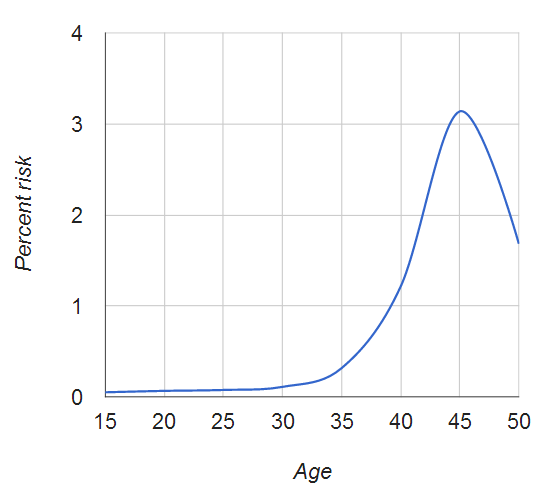