How can Asthma affect fertility

Reproductive changes such as impaired fertility and adverse pregnancy outcomes have been related to female asthma. It has been recently found that time to pregnancy is prolonged in asthmatic females especially in women with moderate to severe asthma and in those above 30 years of age. Despite their reproductive difficulties the asthmatics ultimately conceived just as many biological children as healthy throughout their reproductive lives. The mechanisms linking asthma to fertility still remain poorly investigated. However, recent data indicate that the nature and degree of inflammation characterizing asthma are important since non-atopic asthma, untreated asthma, and moderate to severe asthma had the largest effect on fertility, that is, increased TTP (time to pregnancy). It is therefore proposed that the asthmatic inflammation is a universal problem compared to allergy alone and is involving mucosal surfaces other than the bronchi. Accordingly, one assumption is that the same inflammation and increased number of inflammatory cells and mediators are also found in the uterus or the Fallopian tubes in asthmatic women.

Furthermore, several studies indicate correlation between asthma and gynaecological conditions linked to infertility, such as endometriosis and polycystic ovary syndrome (PCOS)/metabolic syndrome. Common features of PCOS, metabolic syndrome, and endometriosis are subfertility, systemic inflammation, and increased number of spontaneous abortions and an association to asthma could therefore, to some extent, explain the reduced fertility in asthmatics. These data substantiate the hypothesis of an association between asthma and infertility. Based on the available evidence, we know that asthma and maybe other systemic inflammatory diseases can have negative influence on fertility. The association increases with the degree and nature of the inflammation, and data suggest that the severity of asthma and the treatment level as well as the asthma phenotype can increase this tendency.

The effects of asthma on male fertility are yet to be fully explained, but it appears that asthma does not significantly decrease male fertility. 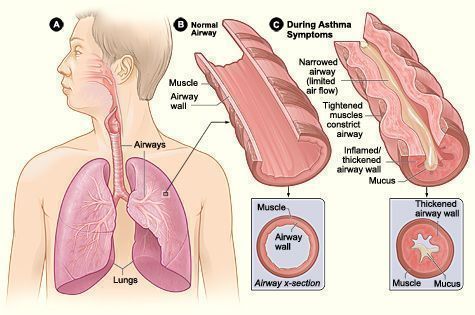