How can Bulimia nervosa affect fertility

Obviously bulimia has a great impact on function of whole body and the function of reproductive system is not an exception. Among other factors, the proper function of reproductive system is dependent on the homeostasis, hormonal balance and mental health of the body. All these aspects are negatively influenced by bulimia directly or indirectly, as described above. This means that bulimia is to be connected with lower conception rates and some reproduction related disorders such as polycystic ovary syndrome (PCOS). It is suggested that bulimia is the risk factor of PCOS development as overeating and starving episodes impair insulin sensitivity and are associated with ovarian morphology changes. The impact of bulimia on reproduction capability depends on the severity of bulimia and the time of its lasting. If successful conception happens, there is still a great health risk to the fetal development if bulimia is not treated properly.

Although the relation between eating disorders, mood disorders and fertility in men is still poorly understood, it is obvious that bulimia in man may also have negative impact on fertility similarly to bulimia in women. Impulsive overeating and purging impairs hormonal metabolic balance which also affects sex hormone production important for proper function of gonads. As mentioned in description, bulimia often goes hand in hand with anxiety and depression. Both of this mental diseases are related with lower testosterone levels impairing spermatogenesis leading to reduced sperm concentration. Bulimia related depression may be also connected with reduced sperm motility or development of erectile dysfunction. 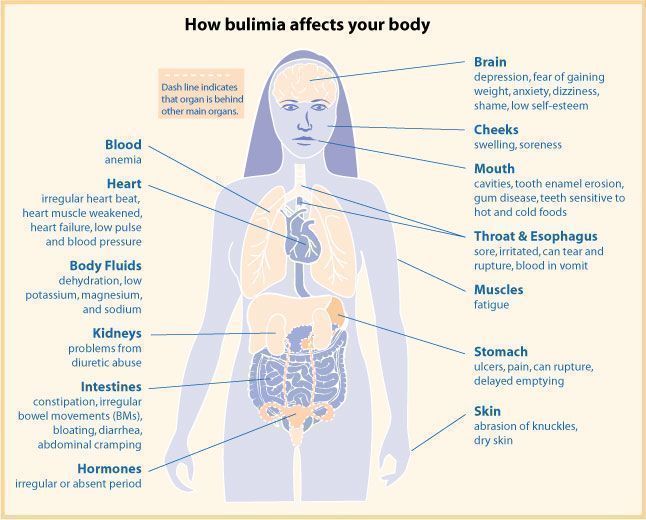