How can Cervical surgery affect fertility

With the earlier detection of invasive cervical cancer, fertility preservation is increasingly needed. At present, since childbearing is postponed, it is more common to detect cervical cancer in women who have not already been pregnant or desire a future pregnancy. The main goal is to maintain reproductive ability without decreasing overall and recurrence-free survival.

Preservation of uterus in women who does not plan pregnancy is controversial as it is in women with previously impaired fertility. Assisted reproduction techniques are widely used and many women did not even tried to conceive before the diagnosis of cervical cancer. Hence, it is not possible to estimate reproductive potential before surgery accurately.

Fertility preservation with conservation of the uterus after an radical tracheilectomy seems to be a safe and realistic option for well-motivated women that wish to maintain their fertility, since recurrence rates are acceptably low, but higher than traditional radical hysterectomy.

The review of the literature indicates that pregnancies are clearly possible after an RT for early-stage cervical cancer, and the majority of women will conceive spontaneously. However there is a higher incidence of preterm deliveries, miscarriages, chorioamnionitis (an inflammation of the fetal membranes due to a bacterial infection) and pPROM (preterm premature rupture of membranes).

However, radical surgery and radiotherapy often do not spare fertility and both methods can lead to psychosexual dysfunction and decreased quality of life. Furthermore, infertility increases the frequency of depression, stress and sexual dysfunction.
Most centres do not also specify an upper age limit for fertility-sparing surgery. Regarding their inherent risk of infertility based on age alone, some centres exclude patients from 40 or 45 years.

Cervical stenosis may impact natural fertility by impeding the passage of semen into the uterus. In the context of infertility treatments, cervical stenosis may complicate or prevent the use of intrauterine insemination (IUI) or in vitro fertilization (IVF) procedures. 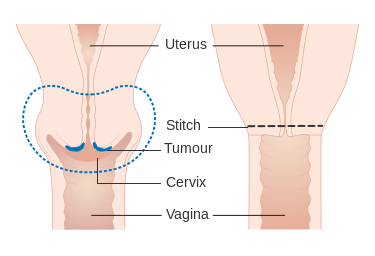