How can Postponed pregnancy affect fertility

In humans, the fertility in female declines slowly from the age of 30 years. Embryo implanting ability and survival start declining gradually after 30 years of age, but by more than two thirds after 40 years and in younger women with reduced ovarian reserve.

In cycling women >40 years, a disturbance in follicular recruitment but not in luteal function or endometrial maturation has been observed and its possible role in the decline in fertility with ageing suggested.

While decline in the frequency of intercourse is one of the reasons, reduction in the quality of either the embryos arising from ageing oocytes due to higher incidence of oocyte aneuploidy (abnormal number of chromosomes in a cell) or the older uterus have been implicated as the probable causes.

Controversy still exists about which one of these is the main cause or whether both of them play a role together. While the suboptimal quality (competence for fertilization) of the ageing oocytes and/or older uterus may be responsible for the age-related decline in female fertility, it is not clear why the functional quality of the uterus or the oocytes declines with increasing age.

Elsewhere, it has been suggested that age-related changes in the ovary account for most of the decline in fertility. Oocytes, which originate in the fetal life, decline in numbers and quality with age. The endocrine function of the ovary also declines with age leading to dysfunction of the neuro endocrine axis (cooperation of nervous system with endocrine).

The uterine lining may change due to the age-related endocrine dysfunction thereby losing its ability to support implantation and growth of the embryo. The frequency of chromosomal anomalies in abortuses increases in parallel with the age-related rise in the incidence of spontaneous abortions. That oocyte aneuploidy is one major reason for low pregnancy rates in older women, is suggested by the higher pregnancy rate in this group where young donor oocytes are used. 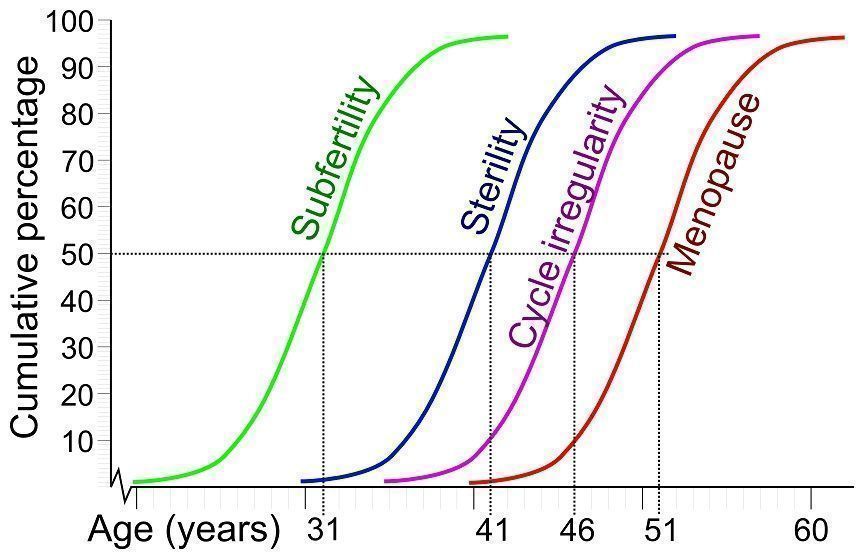