How can Salpingitis affect fertility

Infertility can have multiple possible causes and may not be recognized for years after a Chlamydia or Mycoplasma infection has caused tubal damage, as the affected woman may not have attempted to become pregnant until years later. Tubal factor infertility impedes the descent of a fertilized or unfertilized ovum into the uterus through the Fallopian tubes and prevents a normal pregnancy and full term birth.

As could be seen from (Pic. 2), that tubal infertility is directly related to a number of factors present during the initial episode of salpingitis, which include (besides the number of episodes) the initial severity of tubal inflammation, the organisms responsible, and the occurrence of a subsequent ectopic pregnancy. The rate of infertility is approximately 15% after a first episode of salpingitis and increases to 50% after a third episode. 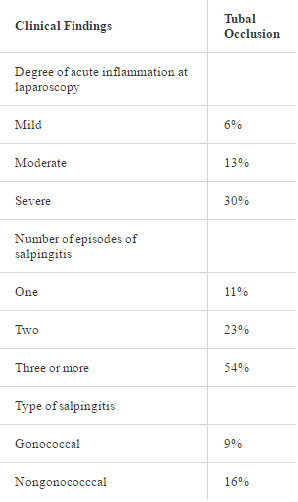